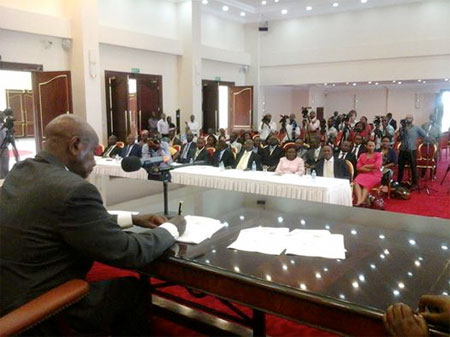 President Museveni struck a familiar note today, suggesting that Uganda’s latest controversy over homosexuality was the result of Western civilizations trying to impose their way of life.

After signing the Anti-Homosexuality Bill on Monday, President Museveni fielded questions from journalists at State House, Entebbe. Here are some highlights from the president's answers.

To the Western world, the president said:

“We want to work with the West but they cannot force us to do something like this, which is fundamentally wrong.”

In relation to his unhappiness with Parliament passing the bill after he had told them to wait, through Prime Minister Amama Mbabazi, Museveni said:  “Those who do not listen are part of the problem.”  “My problem with Rebecca Kadaga and the MPs was that they did not listen to me.”

Museveni said Mbabazi had opposed the bill “on my orders”,

He added: “Now that I have accepted, Mbabazi will also accept.”

Mbabazi had protested the passing of the bill by Parliament, saying that there was no quorum and there had not been enough consultation with him. Thereafter, the president asked for time to analyse the bill, with help from local and foreign scientists.

The Observer reporter Sulaiman Kakaire asked Museveni how the new law could be reconciled with the Bill of Rights, enshrined in the Ugandan Constitution.

The president suggested that any law that appears to impose homosexuality on Ugandans could be changed – quipping that the Constitutions was made by “us” and not by God:

He said: “Any document can be changed if it affects the existence of Ugandans and their cultural norms. Our existence is more important than [any] document”.