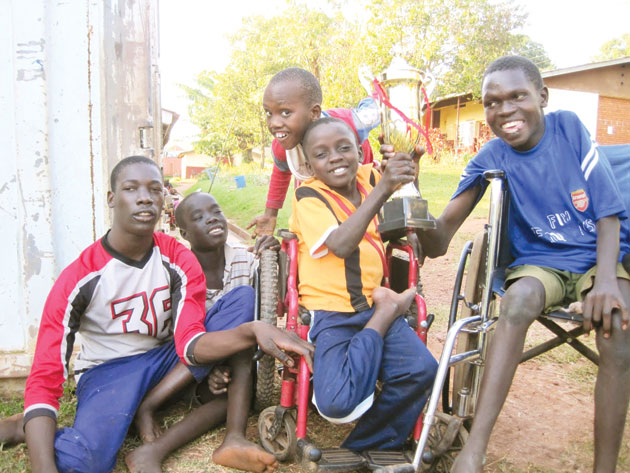 The year was 2000 when Margaret Ninsiima, 24, lost her sight. Every hope she had ‘crumbled’ right away, at least according to what her parents and friends  thought at that time.

As she offered a testimony of what happened to her and how she has managed to make it, at the National Theatre recently, the crowd applauded endlessly while some could not hold back their tears.

Ninsiima had been invited to give an inspirational speech at the launch of Prof Peter Kasenene’s book – This you need to know. In a heart-stirring speech, punctuated with humour, Ninsiima told of a story of trials and sheer determination to make it in life, despite her physical disability.

“I was heartbroken when I lost my sight in 2000,” she said, drawing silence from an emotionally-charged audience.
“I was born normal like you,” she added.

But to judge Ninsiima by her physical blindness is to miss what she is. This year, she successfully completed her degree in Community Psychology from Makerere University. She has moved on to work for the Digital Opportunity Trust (DOT), an international NGO, as an ICT trainer – for the visually impaired.

“I am technology savvy,” she says, “If you want to prove it, send me a friend request or a message on Facebook and I will reply you before the end of today.”

“Training these young people [disabled] to use ICT has not only enriched their ICT practical knowledge, but has also increased their ability…[to] research, and reading (use of digital talking books), and making valuable contacts,” Ninsiima is quoted on DOT’s Facebook account.

Dressed in a black suit, she cuts a striking corporate figure. Somebody else who is just like Ninsiima is Rashid Ssozi, 30. His being visually impaired did not stop him from graduating with a second class degree in Mass Communication from Makerere University in January.

He told The Observer about his success: “I made it; it was my dream to have a degree. It has come true.”

Ninsiima and Ssozi stand out because they paint a unique portrait of the very few persons with disability (PWDs) who have managed to complete their studies. And they are shining examples of how, given the chance, PWDs can transform their lives – education being the spark.

The architects of the Persons with Disabilities Act 2006 knew this well – the fact that education could be the only way PWDs’ lives could be turned around.

This means, for instance, that this financial year in which the education budgetary allocation stands at Shs 1.8tn, the special-needs education should have received approximately Shs 180bn (10 per cent of Shs 1.8tn)

Unfortunately, this has not happened. The state minister for Elderly and Disability Affairs, Sulaiman Madada, told The Observer that the 5(J) provision of the PWDs act has never been implemented as government lacked the policy framework.

“We advised that the law be amended to put in regulation into which that provision can be implemented,” said Madada. “This has not been done.”

But even then, Madada says, government has made remarkable progress in disability education. He says there has been improved accessibility; more people have been trained to teach special-needs children, and an enabling environment has been created.

“Issues of sign language have been emphasised to help in access to information for PWDs. Even establishing the faculty of Special Needs Education (NISNE) at Kyambogo [University] was government’s effort that should be applauded,” Madada said.

Yet, figures for PWDs’ education remain overly disturbing. The 2009/10 household survey done by the Uganda Bureau of Statistics (Ubos) shows that 16 per cent of Ugandans have a disability on their bodies.

But according to the National Union of Disabled Persons of Uganda (Nudipu) website, three quarters of these remain uneducated – despite having universal free education in place to increase enrolment in schools.

Nudipu says only 2.2 per cent of PWDs in Uganda have attained post-secondary education, and 90 per cent do not go beyond primary seven. Different studies show disabled persons are a key group of people that have not benefited much from universal free education programmes.

If funding for PWDs education was increased as per the PWDs 2006 Act, some people argue, there could be a lot of difference. For instance, the Civil Society Budget Advocacy Group (SCBAG) notes that in the financial year 2011/2012, special-needs education was allocated Shs 1.888bn and in the year 2012/2013, it was allocated Shs 2.114bn, a slight increment.

Ten per cent of all school-going-age children in Uganda have special needs. Consequently, the inadequate allocation can’t have any significant impact on the quality of education provided to children with special needs. 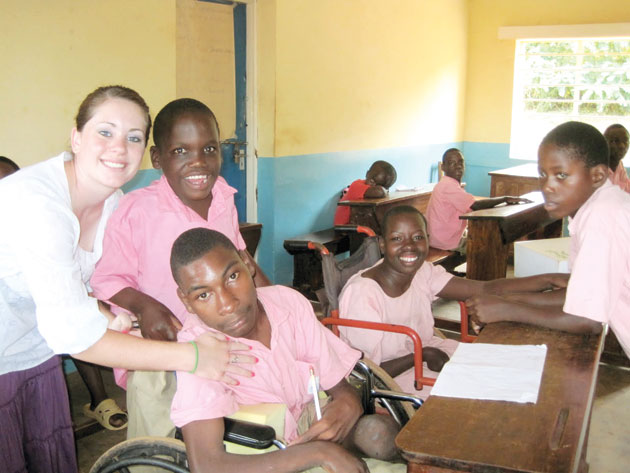 Hellen Grace Asamo, a PWDs’ representative in Parliament, says government must do more than it proclaims. Asamo said a lot of gaps must be bridged.

“Look at human resource; very few people can teach children with disabilities,” Asamo says. “Even then, PWDs need brailled textbooks, special computer software, and typewriters. There is no school with such.”

Most centres that train special-needs children are run by donors or religious groups. Katalemwa Cheshire, for example, runs entirely on donor funding. Mulago School for the Deaf is funded both by the Catholic Church and donors while Kampala School for the Handicapped sells crafts made by special-needs people themselves to get funding.

Only five per cent of children with disabilities (CWDs) study with able children in different schools and, as expected, are given less attention – just because they cannot keep pace with the rest of the class.

Besides that, very few study in special schools and annexes. Consequently, many opt out and wander on the streets, begging for their next meal. The Advocacy Coordinator of Uganda National Association of the Deaf (Unad), Joseph Mbulamwana, believes the PWDs act was spot on.

He said: “[But] if it was implemented, dropout rates would reduce and performance become better because learning and training materials that meet CWDs’ needs would be availed.”

And Portase Kanyankore, head teacher Mulago School for the Deaf, says most CWDs drop out of school because of the lack of tailor-made scholastic materials.

In an opinion article published in The Observer recently, Joseph Malinga, the communications manager Nudipu said: “this provision [5(j) of PWDs Act 2006] is well anchored in the 1995 Constitution of Uganda and other subsidiary laws.

It, therefore, follows that with the limited budget allocation to special-needs education, this legal provision could as well only remain wishful thinking.”

Meanwhile, Ssozi and Ninsiima remain living testimonies of what education can do for PWDs.