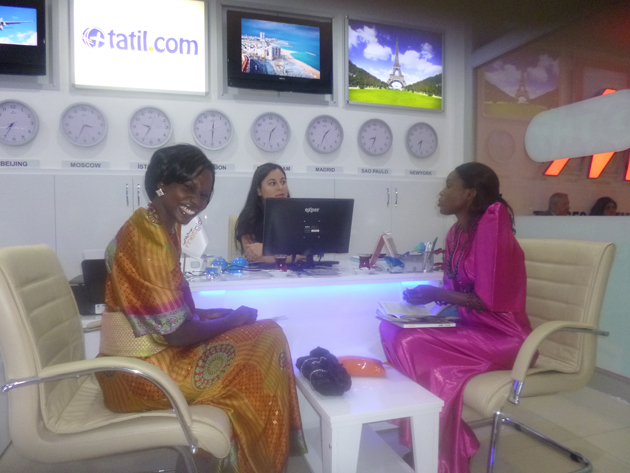 Istanbul – In a way, journalists are like scouts; both are supposed to be prepared at all times.

This story starts with the feat of planning for a 2,824-mile journey in the space of just 13 hours.

See, for the first time in the pageant’s history, the ministry of Tourism decided to have the contestants who participated in the Miss Tourism 2013 go to various destinations to promote Ugandan culture.

The pageant ended on October 26 with 22-year-old Harriet Barbara Nakitto walking away with the crown. After the auditions which took place in Kampala at Sheraton hotel, nine girls were selected to compete for the grand prize.

Unlike Miss Uganda who walks away with a car and other goodies, the winner of Miss Tourism will be on a constant tour around the world trying to promote Ugandan tourism.

But before Nakitto’s crowning, she and the other contestants had to get a real feel of the richness of the tourism industry to be able to promote it from an informed point of view.

All countries with flights out of Entebbe and thus potentially lucrative sources of tourism revenue.
I met the girls for the first time at the stroke of midnight at Entebbe airport. We were just in time for check-in.

Despite the short period to prepare, there was no way I was missing out on visiting the only city in the world lying between two continents; on one side it is bordered by Europe and on the other side is Asia, thus Turkey being an interesting melting pot of cultures.

Although the trip was just for four days, the girls had packed stuff enough to last someone like me an entire two months! Thanks to the dot.com era, all we needed were our passports and visas; the ticketing was done online.

We boarded a direct Turkish Airlines – selected by Skytrax as Europe’s best airline for three consecutive years in 2011, 2012 and 2013 – flight. The hostess informed us the flight would take six hours and seven minutes. We left Entebbe at 3:50am on Sunday, October 20.

The latest in-flight movies and documentaries on the seat screen kept me stay entertained and the six hours flew by in no time. We arrived at the Ataturk airport at 10:30am; comparing Entebbe airport and Ataturk would be like trying to compare a Nokia 2310 and a Samsung Galaxy S4. Our airport is the village girl against their Kim Kardashian.

At the airport we were picked up by Hamid Awad, an architect and businessman in Istanbul who was the ministry’s contact there. Awad drove us through the city for about 40 minutes to Esen Palas hotel, our home for the next four days. We decided to first unwind and beat off the jetlag before the tour could begin.

Awad returned at 8pm, to take us around. We found Istanbul in party mood. It was the last day of the Eid holiday feast. In Kampala the Muslim fraternity has just one day off to celebrate Eid al Adha.

Well, they should consider moving to Turkey; there, the holiday lasts a whopping nine days!
A walk through their city left us with that wow feeling; there are no fake, second-hand cars on the streets. Fiats, Audis and cool Hondas rule, and they are the latest models.

However, despite having super lit streets and amazing stores, just like Kampala their streets have beggars and roadside vendors. We were further shocked when Awad took us downtown and to our amusement, smart phones were being vended on the street sides.

Awad told us that when people get tired of their phones they bring them to the streets for a quick buck, can you imagine a second-hand, as good as new Samsung Galaxy II going for $120 (about Shs 300,000)?

The next day, we were taken to DEik, which serves as the Foreign Economic Relations Board where the girls spent half a day, explaining to the board the beauty of Uganda as part of the contest.

The contestants mesmerized the board, showing up in gomesis and talking about the various bird species in the country. We took another drive visiting Tursab, the association of Turkish travel agencies where the girls repeated their impressive performance.

On Tuesday, we took a drive through the legendary Bosphorus bridge that joins Asia to Europe. On the Asian side we visited Kanal A TV station where the girls did a brief interview about Uganda and the tourism sector.

In the evening, we visited some of their tourist spots including the astoundingly beautiful, huge, six-minaret Sultan Ahmed mosque or simply, Blue mosque because of the blue tiles on the mosque’s walls. The 10,000-seater mosque was completed in 1616 and is still used for prayer.

Most of Istanbul’s streets are filled with cats; big, small and gigantic cats. Awad explained that the Turks believe that when someone dies, they return to earth in form of a cat. So, the felines are never killed; they could be a reincarnated beloved relative.

Almost every household has a cat and they are given royal treatment. Being seen hurting one is a violation of animal rights. There was no way we could return to our village girl (Entebbe) without tasting the Turks’ night life; Awad took us to the Turkism street.

It is the Kabalagala of Istanbul, only bigger. From bars, night clubs, strip clubs, shops and salons, it is a one-stop centre. Yes, bars and booze are commonplace. Turkey’s situation between two ‘situations’ (Europe’s liberalism and the Middle East’s strong religious influences) means they are a quite interesting people.

In fact, despite a majority of its populace being Muslim, it is a secular state. It is illegal to wear the Hijab in universities and public or government buildings, as some view it as a symbol of Islam.

So, we bar-hopped for a while before visiting Mask Live club. The club has a live band and revellers are given a chance to come and try out their singing skills. The club had been informed about our attendance and the girls were given their chance on the mic.

Only Wandira could sing, and she decided to do Lillian Mbabazi’s Danger; to our amusement, the club cheered along despite not knowing the song, language or the singer. On Wednesday the girls spent the day in shopping malls around town gearing up for their finals in Kampala.

We returned on Thursday aboard Turkish Airlines just in time for the finale. From my Istanbul trio, at least Nakamyuka emerged first runner-up. And considering that Turkish Airlines now flies direct to and from Entebbe, the girls’ stay in Turkey could soon yield tourists.

Nakitto starts her reign with preparations for the Miss World Tourism contest slated for December 3 in Malaysia.

What you did not know about the Turks?