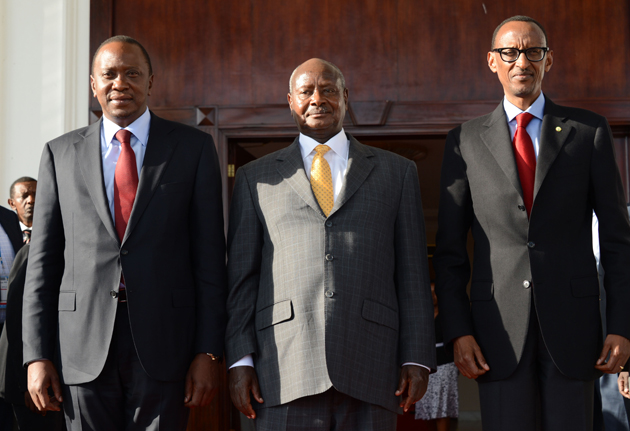 Tanzania’s apparent reluctance to fast-track East Africa’s integration has led to suggestions that the rest of the states should not wait for Dar es Salaam.

But as Alon Mwesigwa reports, Uganda, Kenya and Rwanda may need Tanzania more than it needs them.

Although Tanzania has historically been a key member of the East African community, two meetings – in Entebbe and Mombasa – which it missed, have raised eyebrows.

The Mombasa meeting last month, which discussed the regional infrastructure and the Single Customs Territory (SCT), led to questions on whether Tanzania was still interested in the integration.

The meeting was attended by Presidents Uhuru Kenyatta (Kenya), Yoweri Museveni (Uganda) and Paul Kagame (Rwanda). Tanzania’s Jakaya Kikwete was missing. South Sudan, which might be admitted into the community soon, and Burundi, were represented by ministers.

Tanzania was also not present at the earlier meeting of the three presidents in June, where the region’s infrastructure was high on the agenda. With Tanzania apparently foot-dragging, The Observer recently reported that Uganda, Kenya and Rwanda had even formed a committee to draft the constitution for the eventual federation.

In some circles, these countries are referred to as the ‘coalition of the willing’. While the EAC Treaty provides for some members moving forward with integration as others catch up, Tanzania sees the trilateral ‘coalition’ as a threat to the broader regional integration.

“So long as Kenya, Rwanda, and Uganda have consciously decided to isolate us, all we can do is to leave them alone and wish them well,” Tanzanian East African Community Affairs Minister Samwel Sitta was quoted in The East African newspaper last week.

Dr Ladislaus Komba, Tanzania’s High Commissioner to Uganda, also told The Observer that any trilateral action could resurrect the ghosts that led to the collapse of the EAC in 1977.

But why does Tanzania seem uninterested in fast-tracking the federation?

Experts say it has genuine reasons ranging from land and mineral concerns to the amount of trade it has with the member states. Isaac Shinyekwa, a research fellow on regional integration at the Economic policy Research Centre (EPRC), said:

“First of all, the EAC countries must first come clear on the issue of land. Tanzania knows there is a big problem about the land ownership in Uganda and Kenya, where it is the rich who own the biggest chunks of land. People are fighting day and night over land. Tanzania has seen all this.”

Land in Tanzania is property of the state but citizens use it communally. Shinyekwa says Tanzania seems to be so much inclined to the Southern African Development Community (SADC) than EAC.

Indeed, 2011 figures by the EAC secretariat indicate that Tanzania exports to the EAC partners were worth $416.8m while Kenya’s were $1,544.4m. Uganda was second to Kenya with her exports valued at $649.7m.

“Kenya is a power house; perhaps Tanzania has realised that there is nothing to sell there,” Shinyekwa said.

In a way, Tanzania acts more as a market for the members. Tanzania also knows the problems of integration, reading from her experience of political federation with Zanzibar, he says.

But Shinyekwa also feels that the rate at which the ‘coalition’ trio is pushing the integration is too high.

In November, they are expected to sign the monetary union protocol but they agreed it would take between five to 10 years to be realised, followed by the political federation soon after. Yet, by comparison, it took Europe at least 50 years to realise the monetary union.

“Tanzania is saying, ‘look, we can go slowly here’,” Shinyekwa says. “I think the integration should have stopped at the Customs Union and then they first observe the progress before rushing into signing other protocols.”

To Shinyekwa, the other EAC members need Tanzania more than it needs them – from donating land where the EAC headquarters in Arusha, to having a long coastline and Dar es Salaam used by member states to import their goods in times of turbulence in Kenya.

Also, the country’s districts near Mutukula border depend heavily on Uganda for their needs, which give Ugandan traders a ready market. And many of Kenya’s exports find their way into Tanzania – providing a much-need market for the country’s blossoming manufacturing sector.

Kenya Revenue Authority (KRA) ranks Tanzania the fourth market for Kenya’s exports after Uganda, UK, and Egypt. Thus, losing Tanzania in the federation means mislaying a big market for other states and an import port of Dar–es-salaam.

While it might also cost Tanzania, it has huge hopes in SADC – its main trading partners. Martin Okumu, Uganda National Chamber of Commerce and Industry secretary general, argues that Tanzania is the most important partner in the federation.

“Tanzania is one of the three states [with Uganda and Kenya] that sought to revive the EAC. The rest were invited later. How can you leave the founding member?” wonders Okumu.

On Tanzania being linked more to SADC, Okumu says it’s even at the advantage of EAC that one of their members is allied to a stronger bloc.

“Tanzania can bring lessons to EAC and show them that look, things are done this way. Besides, SADC has been in place for so many years and the EAC was defunct. Do you expect Tanzania to trade more with a bloc that had not been in existence for many years?”  Okumu said.

Besides, Tanzania is the most stable country in the region, it has had smooth transition of leaders unlike other states, Okumu argues.

Meanwhile, the private sector in Uganda has complained that in an attempt to fast-track the federation, they have been sidelined. They say when the president is signing all these protocols and making visits in the region, he only moves with politicians and technical people but not the private sector.

“The president has always said that Uganda’s economy is private [sector]-led, but we haven’t seen him consulting us,” Ssali said. “We thought the federation was supposed to improve trade. If you don’t engage or ask the stakeholders, then it beats our understanding. To me it looks as if it’s a coalition of politicians pushing their own agendas.”