Stella Nantumbwe beat off the challenge of 22 fellow finalists to be crowned Miss Uganda 2013/14 last Saturday at the Kampala Serena hotel.

The beauty queen’s journey to stardom started on May 25 at Mari Floor bar in Masaka when she beat 17 girls to take the Miss Central crown – automatically making it to the finals. Her confidence, wit, intelligence and beauty stood out from the outset, giving her challengers no chance.

Nantumbwe had told The Observer that evening: “My eyes are on the Miss World title” – suggesting she hardly saw any hurdles to the Miss Uganda crown. 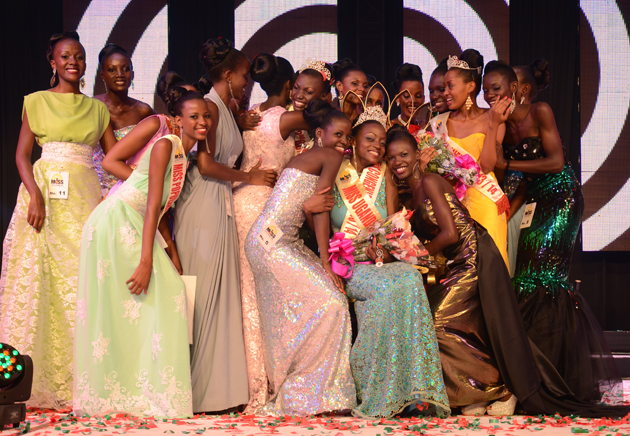 Even during the boot camp, Nantumbwe was the name to watch. At the talent night, she had left everyone gaping with her original composition song about Miss Uganda. Her vocal ability showed she was not just beautiful and intelligent, but musically talented too.

Even some of her fellow contestants admitted she was leaps and bounds above them - the reason they voted her Miss Congeniality. The 22-year-old graduate of Business Computing from Greenwich University in South East London answered every question posed by the judges to the point.

Unlike last year when many people were left whining about outgoing Miss Uganda Phiona Bizzu’s beauty, last Saturday almost everyone was in unison that Nantumbwe had to walk away with the crown.

Now what is left for this girl is to take on the world when the Miss World beauty pageant gets underway in Indonesia in December. Nantumbwe’s victory came with a brand new Mercedes Benz ‘A’ Class and a monthly allowance of Shs 1.5m for the next twelve months.

Anita Kyarimpa who won Miss Western Uganda and Sandra Amoding were the first and second runners-up respectively. This will entitle them to Shs 1m and Shs 500,000 monthly allowance for the next twelve months respectively.

Now to the event itself.

Fennon Productions were the guys in charge of the production and they have surely upped their game. From the stage, lighting, backup screens, speakers and the deco, Fennon showed they are ready to take on anyone in Uganda’s events management business.

Sanyu FM’s Crystal Newman and Kinetic Management Group’s Agaba Tumusiime were the emcees of the show. And the pair did a good job, but for a four-hour event, you expected them to have at least changed their outfits twice.

There were performances by Lillian Mbabazi and Grace Nakimera whose choreography was impressive. Nakimera performed with a group of dancers all dressed in the Uganda flag colours and every move was in sync. Maureen Mutabingwa aka Mo’Roots also thrilled with her skills on the saxophone.

Alex Muhangi of The Crackers, who has been cracking up fans on the regional tours, was still the comedian they chose and he did an amazing job cracking jokes about the manners of various tribes, and even taking a jab at the Queen Mother of Tooro Best Kemigisa who was guest of honour. She couldn’t help it but just laugh.