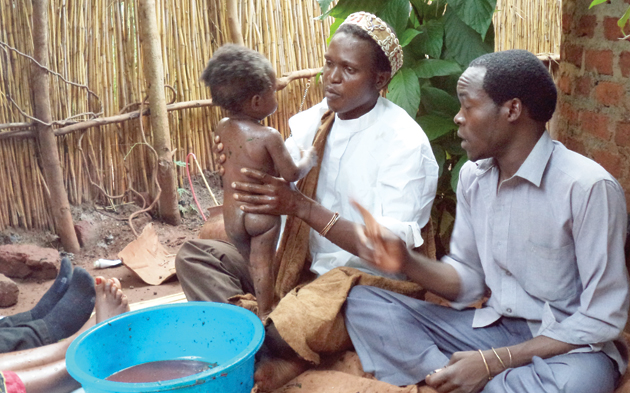 Visitors to Jinja are often intrigued by stories of witchcraft. While some consider them remnants of a bygone era, others take them very seriously.

According to Waiswa Hassan Muyiri, who says he is possessed by a spirit called Muyiri, more than 60% of Basoga regularly consult witch-doctors.

Muyiri, now in his 30s, dropped out of school in S.1 to run six shrines at the foot of Muyiri hill in Mafubira sub-county, just behind the Busoga cultural headquarters and near the official Kyabazinga palace. Muyiri believes he received a ‘calling’ from his ancestors to become a healer and rejecting this call would result in impotence, illness, instability and insanity.

“Any person may be chosen by their ancestors to perform this duty, regardless of their age and background - I was called when I was just 16 years and in S.1 one … once a person responds to his/her ancestral calling (okusamira), they will have to endure a rigorous personal journey known as ‘obusamize’ (possession of spirits, wherein they are psychically prepared for their vocations),” he said.

Muyiri has mastered the dynamics and nuances that come with being a spirit medium. During consultation, a deep voice, reminiscent of an elderly person comes from behind a black curtain, which occasionally correctly guesses one’s name and particulars before the consultation starts. As the voice speaks, one can hear the jingles of bells – normally in a set of 40, stringed on a dry python skin.

Later, Muyiri will throw down a set of beads (ensimbi) on a white cloth. It is generally believed that it is the ancestors who position the layout of the beads after they have been thrown up as a way of communicating what problem is being addressed. At this stage, the priest enters a trance-like state in which he communicates with the spirit world or experiences various sensations such as smells, feelings, voices or visions.

After a while, he will prescribe a remedy, and the client can leave. But not every consultation results in a quick remedy. According to Muyiri, some healers experience ancestral ‘contact’ through dreams, before they can prescribe remedies, which may be herbal or otherwise.

Muyiri tells The Observer that the majority of his clients are women, who usually frequent his shrines to seek favours, including having babies, love, revenge against co-wives and job security. Indeed, on the day The Observer visited, a female client, only identified as Nanangwe, had returned to Muyiri’s palace to thank him for his services after she gave birth to a baby girl after trying for eight years.

“We moved to several health units and followed the advice given to us by gynaecologists but things never worked out. However, when I came here and prayed to the spirits, I conceived in one month. My husband and I are excited,” she said, with a huge smile.

“Today we have brought the baby for introduction, naming and thanksgiving to the spirits that saved us from the shame of having no child,” she added.

Muyiri emphasizes that once a person goes to shrines to pray for a favour, they must return to give sacrifice to the spirits after getting what they wanted, lest things backfire.

“When you come to pray, you put a bet. You may pray that ‘Jaajja Muyiri the mighty parent, please I come before you, crying for a job. Should you give the favour and I successfully get employed, I will sacrifice a goat for you’. When such a client fails to bring the goat, the spirits will punish him,” says Muyiri.

With the eleven hereditary chiefs failing to elect a new Kyabazinga for Busoga for several years, Muyiri says the spirits are enraged and have threatened to bring more calamity until a successor is found. The last Kyabazinga, Henry Waako Mulooki Zibondo, breathed his last in September 2008. Parts of Busoga have also suffered a jigger epidemic, which Muyiri again attributes to unhappy spirits.

“Jiggers will continue feasting on Basoga and the region will never get rid of this deadly parasite, not until there is a fully-enthroned and respected Kyabazinga in the palace,” he said.

“Famine, violent rain storms, dry spells, domestic violence, accidents and internal conflicts will not end because our spirits are not happy. When they [ancestors] are angry, they in return punish their people.”

Muyiri is also angry that the hereditary chiefs have politicised the election of a new Kyabazinga.

“I even wonder how they began thinking that it is State House [Museveni] that can help them get a new king. We just heard them go to him for a meeting on this cultural issue. Why can’t they copy a leaf from their brothers in Buganda? How many times have you heard Buganda princes meeting the president on issues concerning succession of a king?”

Muyiri has threatened to mobilise the locals against politicians who are involved in cultural affairs.

Muyiri admits that despite their best efforts, many priests are fake and out to con their clients of money without offering the required services.

“Imposters can also throw beads and pretend to have entered a trance-like state, an act that ensnares clients,” he says, adding that healers are always out to help their clients with good acts, while sorcerers cause harm.

“Most healers often blur the boundaries between good and bad. Many people consult us, not only for help with their health, but their relationships and job security,” he says, smoking his pipe.

He says he has asked police before, to take serious action against fake herbalists whose number is on the rise in Jinja, to little effect. Despite Muyiri’s best efforts, the police are afraid of witchcraft.

The head of crime investigations in Busoga sub-region, Julius Ogweng, says: “for us as police, we can only come in when they [traditional healers] are reported to have committed crimes”.

Ogweng adds: “I think they register with the district authorities and they have identity cards and certificates of operation. I’m not so sure but I think so,” he told The Observer.

Regional Police Spokesman, Samson Lubega, wants traditional healers to be registered through their umbrella organisations. Patrick Nuwagaba, a police officer in charge of Bugembe, home to more than 60 shrines, also wants traditional healers to organise themselves in groups. Nuwagaba says the police have only closed the shrines of those reported to have conned their clients.

But Muyiri is sympathetic to the police, observing that in order to reduce the number of fake traditional healers, Parliament should enact a law to regulate witchcraft in Uganda. The only law on the books is the Witchcraft Act of 1957, which is now unenforceable.

This act suggests punishment for people who threaten to cause disease or any physical harm to another person or livestock or harm to property through witchcraft or any other supernatural means. But it does not criminalise people who extort money from unsuspecting clients.

Rape, sexual harassment and defilement, now on the rise in shrines, are also not addressed in this archaic law, according to Dr Musa Moses Mwinya, Executive Director of Jinja Herbal Resource Agency.