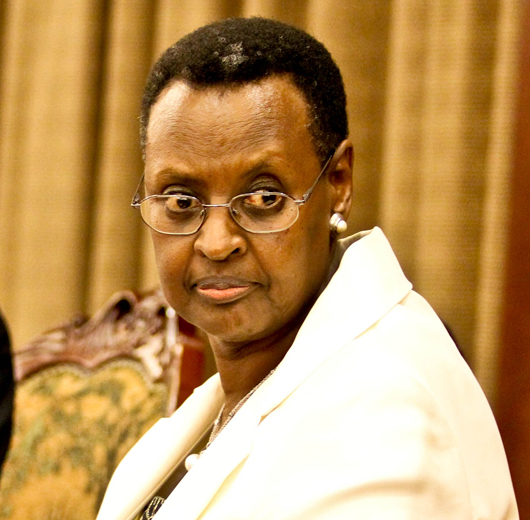 A row is brewing between the Office of the Prime Minister and the ministry of Health, over attempts to shift control of projects worth $43.8m from the ministry.

OPM wants to own the $22.8m Integrated Intelligent Computer System (IICS) project while the First Lady wants changes in  control of a $21m (about Shs 54.6bn) immunization programme funded by the Global Alliance for Vaccines and Immunization (Gavi).

According to insider sources, the fight over the programmes started with Gavi’s announcement of a new grant of about $21m (about Shs 54.6bn) to support immunization programmes. There was an additional $22m (about Shs 57bn) for vaccines and related supplies to support Uganda during the introduction of Pneumococcal Vaccine (PCV) for the treatment of pneumonia, Rotavirus vaccine against diarrhoea and human papilloma virus (HPV) vaccine against cervical cancer.

The funds are supposed to be directly handled by the ministry of Health, which has completed the implementation of the Integrated Financial Management System (IFMS), a conditionality set by Gavi. Bank of Uganda and the Finance ministry have already cleared the Health ministry’s IFMS to handle the funds which will directly be supervised by Gavi.

However, on February 1, First Lady Janet Museveni called a meeting at State House Nakasero, to discuss the “challenges and declining” trend in the immunization coverage in Uganda. According to minutes, a copy of which The Observer has got, the meeting was attended by Janet Museveni (First Lady), Irene Kawuna (Head of Protocol) and Molly Asiimwe (Principal Private Secretary).

The meeting, among others, resolved to fast-track the release of Gavi funds to support routine immunisation operational activities. It also resolved that supervision of activities should shift from the ministry of Health-run Uganda National Expanded Programme on Immunisation, (UNEPI) to the National Medical Stores (NMS), an autonomous government corporation.

UNEPI is a national programme that targets mainly infants and women of childbearing age. Its objective is to ensure that every child and high-risk group is fully vaccinated with high-quality and effective vaccines. After the meeting, Ondoa wrote to Dr Asuman Lukwago, the permanent secretary in the ministry of Health, communicating the resolutions.

“This is to once again direct you to urgently implement the resolution of the meeting I had with the first lady Hon Mrs Janet K Museveni on 1st, February 2013,” reads Ondoa’s letter in part to the PS.

In her letter, Ondoa also expresses her disappointment with Lukwago for ignoring her directives especially in regard to the resolutions of the State House meeting.

“To date, you have not given me an explanation as to why you did not attend the meeting, and also why you continue to give contrary directives to the National Medical Stores and not as resolved at this meeting,” Ondoa’s letter continues.
Ministry sources say the meeting targeted to dismember UNEPI and integrate its activities into the NMS under Kamabare, has been roundly opposed by technical staff.
In fact, Ondoa’s letter also directs the PS to stop “fighting” NMS.

Lukwago declined to comment on his minister’s letter, when The Observer reached him.

“I lost my father last Wednesday, and have not returned to office. I don’t know what is happening there…,” he said.   Ondoa couldn’t be reached for comment by press time.

The Observer has, however, learnt that Lukwago wrote back saying the State House meeting was not a formal government meeting that could issue binding resolutions.   Lukwago said the resolutions were merely recommendations that could be relied on for future action.

“They were attempting to annex UNEPI programmes onto NMS, but that was not handled through the proper procedures. The minister [Ondoa] thought things will be managed the way she wants without respect to laid-down procedures,” a ministry official told The Observer.

Wary of what befell former Health ministers Jim Muhwezi, Alex Kamugisha and Mike Mukula, and State House aide, Alice Kaboyo, who were accused of misappropriating more than Shs 1.6bn in Gavi funds in 2007, the ministry staff have petitioned the Inspector General of Government (IGG) to intervene.

Another source of brewing controversy is the $22.8m (Shs 58.7bn) meant for the innovation and implementation of the Integrated Intelligent Computer System (IICS), funded through the Presidential Support to Scientists initiative (PSSI). According to a February 19 letter to Health Minister Ondoa by Prof Tarsis Kabwegyere (minister for General duties – OPM), the project is intended to make health service delivery more efficient and responsive.

The letter is copied to the Prime Minister and minister of Finance, among others. However, the technical staff in the ministry of Health have objected to the proposals on grounds that they cannot budget for an activity to be implemented by the Office of the Prime Minister.

Having successfully implemented a similar data collection project; the District Health Information system 2 (DHIS2) in all the 112 districts, the health ministry is also questioning the relevance of the new project being proposed by OPM. DHIS2 was implemented with support from development partners notably WHO, Usaid, CDC and Unicef after the Finance ministry failed to finance it. This system was adopted principally to harmonize the various systems that were being managed by the development partners whose findings were not benefitting the ministry.

With DHIS2, the ministry of health is able to keep track of patients, deaths and births registered at all health units in the country. OPM is already piloting the IICS project at Mulago hospital, leaving the health ministry wondering how it is going to be adopted when DHIS2 has just been adopted.

The ministry of Health had not learnt of the IICS project until early this year when its Resource Centre called a harmonization meeting for all stakeholders. It is at this meeting that the ministry interfaced with a one Silver Kiyimba who claimed to be the developer of the IICS.

“This is not the work of OPM, in fact even the project objectives they are highlighting have already been achieved through the sector Monitoring and Evaluation plan and the DHIS2 which is integrated across programmes and partners,” an official at the ministry said.