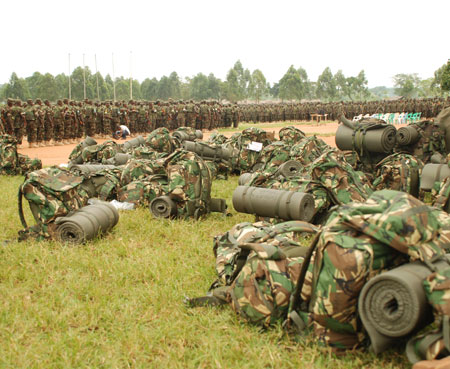 Having achieved what the greatest army on earth – the  US – could not in Somalia, by establishing a semblance of order in the hitherto volatile country, the Ugandan army could now be headed for an equally challenging mission in Mali, according to our sources.

Uganda plans to contribute troops to the African Union mission that is fighting against extremist rebels in the West African state of Mali, The Observer has learnt. The mission was sanctioned by the UN Security Council on December 20, 2012, through Resolution 2085, which “authorises the deployment of an African-led International Support Mission in Mali (AFISMA) for an initial period of one year.”

Without confirming the deployment, the minister of state for Foreign Affairs, Henry Oryem-Okello, told us that Mali’s Foreign Affairs minister Tieman Coulibaly had been in Kampala recently to formally request President Museveni for military assistance.

“He [Coulibaly] was here to ask for President Museveni’s support to back the African Union military force in Mali,” Oryem-Okello said.

The minister further revealed that the Malian government had particularly asked Uganda to be part of the AU-backed military intervention to the West African country.

“Yes, Mali has requested for our support. Mali appreciates our successful missions in Somalia, Central African Republic, Burundi and others. They want our support because of that regional influence,” Oryem said.

However, Defence and Army Spokesman Col Felix Kulayigye was more cautious, explaining that deployment would have to follow more talks.

“We have to do it with authorisation from the African Union, we can’t just go unilaterally,” he said.

The Observer has got reports that at least two military contingents were undergoing training for the mission in Mali, something the army spokesman couldn’t confirm or deny. The African troops were initially to be deployed in Mali in September 2013, but following sudden territorial gains by the rebels in January, France was forced to intervene to halt the advance.

However, the French have made it clear that they would like to hand over to an African-led force sooner than later. As a result, many African countries have sent soldiers to bolster the mission while others have pledged troops or other forms of assistance. According to estimates by the United States Department of State, there were about 1,400 AFISMA troops from Nigeria, Benin, Togo, Senegal, Burkina Faso and Chad in Mali by the end of January. More soldiers are expected from Liberia, Sierra Leone, Ivory Coast and Niger.

Uganda would, however, be the first country from outside West Africa to contribute soldiers to the mission. Other non-West African states considering the move include Rwanda, Tanzania, Burundi and South Africa, according to a website that claims to have inside security knowledge.

Although the French have played a pivotal role to peg back the militants, the mission could still prove dangerous. Online news reports show that by last month, at least 16 AFISMA troops had been killed. Mali would not be Uganda’s first even mission in West Africa; Uganda was part of a peacekeeping mission in Liberia in the 1990s. Besides Somalia, where they are part of another African Union peace mission, Ugandan soldiers are currently involved, militarily, in Central African Republic and Democratic Republic of Congo, to fight Lord’s Resistance Army (LRA) rebels.

With France, which has deployed about 4,500 troops in Mali, poised to leave, the territory in northern Mali that was formerly in rebel hands will be handed to the Malian army backed by the 3,800-strong AFISMA. Uganda looks set to be part of that mission.

Appearing on BBC last month, President Museveni praised the French for intervening to repel the rebels who were poised to strike the capital, Bamako, but was very critical of the Malian army and regional armies for failing to act without French help.