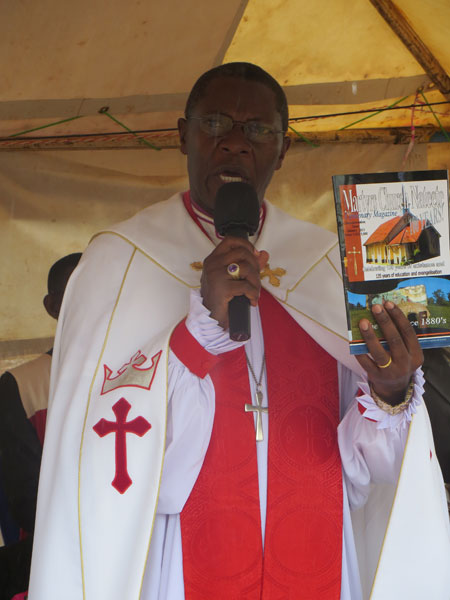 On January 20, Martyrs’ Church (Mackay) in Nateete held its centennial celebrations in remembrance of Alexander Mackay, a British engineer-turned-missionary, who introduced Christianity in that area.

The celebrations were presided over by Bishop Wilberforce Kityo Luwalira, the bishop of Namirembe diocese, who urged congregants to steer clear of contradicting ‘gospels’ which have rocked the church lately.

“There are some ‘gospels’ that are being preached that are compromising the church. In fact, I am surprised that bishops have fallen in the trap and are supporting such causes!” Luwalira said.

He added that there is need for parents and community elders to sex-educate the children and warn them of risky behaviours and HIV/Aids so they may live healthy lives.

In his address, Walusimbi urged congregants to respect life and end the immoral practice of mob justice. The celebrations were marked by a cultural performance from students of Mackay College School, plus a wildlife and trade exhibition and fundraising for a new church building.

The Mackay legacy through 100 years

There is no better identity of Martyrs’ church Nateete than that of Alexander Mackay, a British missionary belonging to the Church Missionary Society. He arrived in Uganda on November 6, 1878 in response to Kabaka Muteesa I’s request to Her Majesty the Queen of the UK to send to Buganda ‘trustworthy men to teach his people western civilisation.’

Upon his arrival, he met the Kabaka at his palace on Lubaga hill who then ordered that Mackay be settled at Kikandwa village hill, whose name changed to Lungujja.

As Mackay started to settle at Lungujja, Muteesa’s intelligence network discovered that the muzungu had a mysterious instrument (binoculars) which enabled him to recognise objects far from his camp.

This information annoyed the Kabaka who ordered for the missionary’s immediate transfer to an area on the western side of Nateete hill. This is because it was believed that the muzungu’s ‘magic’ would not penetrate the hills and detect the Kabaka’s palace.

“At Nateete, Mackay began his missionary work by establishing a worship centre; putting up the first mud-brick storeyed house, a printing press, education centre and medical unit. Nateete became the centre for the Native Anglican Church (N.A.C) and the CMS,” Edward Kato Bitalo, the secretary, History committee of the church, explained.

His work encouraged other missionaries like Rev Father Smeon Lourdel to come to Uganda and evangelize. After the death of Muteesa 1 in 1884, the heir to the throne, Kabaka Mwanga II, on the advice of his associates, became hostile to Christian teachings and the followers were accused of trying to disobey him.

“This forced Mackay to make a cave under a tree near the water well some 200 yards below his quarters where he taught Christian followers and urged them never to give up,” Bitalo says.

In fact, ‘Temudda nnyuma’ (do not go back) became Nateete’s motto until today. Owing to the fact that Mwanga II had vowed to stamp out Christianity and its followers, he started harassing Christians and murdering them, which led the notorious religious wars of Uganda. These wars did not spare Nateete centre as the structures erected by Mackay were all razed.

At the climax of the wars, Mackay travelled to Karagwe in Tanganyika where he made a model of the building he envisaged to build at Nateete. Unfortunately, he died of fever on February 8, 1890. After the wars, Christians determined to carry forward what Mackay had started and at the first church council of Nateete Congregation on November 28, 1911, it was resolved to build a permanent structure following the model of the building which Mackay had left at Karagwe.

The present building which houses Martyrs’ church was started in 1912 and represents ideas of Mackay’s model building. Apart from the church building, Mackay primary school was built and the CMS maintained its headquarters here.

The church is dedicated to three Christian martyrs: Makko Kakumba, Yusufu Lugalama and Nuwa Sserwanga, who were picked from the centre and killed on  January 31, 1885 at Busega Mpiima Erebera on Mwanga II’s orders. It is believed that the present church stands at the spot where the first Anglican converts, Mackay Sembera Kamumbe, Firipo Mukasa, Yakobo Buuzaabalyawo, Yakobo Takirambudde, Princess Nalumansi Kaalaala and Princess Lakeri Namikka were baptized on March 18, 1882.