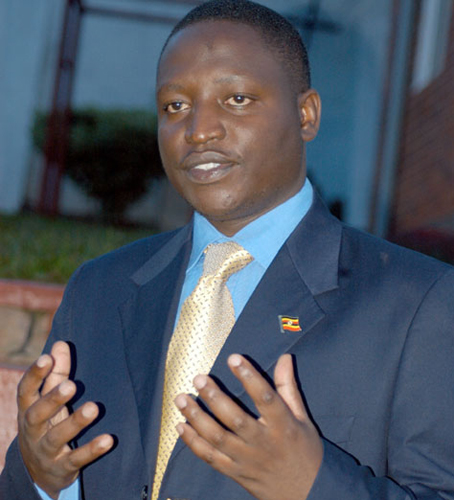 Almost a week after Cerinah Nebanda’s death, David Bahati, the anti-gay bill sponsor, finds himself thrust into the unviable limelight as a person of interest in the death of the Butaleja woman Member of Parliament.

Until now, Bahati was known and has struggled to keep attention on his anti-gay draft legislation that has caused an uproar in the international community.

But on Wednesday, Nebanda’s family fingered Bahati as the link between Cerinah and her alleged boyfriend Adam Kalungi, who is a key suspect and still on the run. Bahati, in a statement issued yesterday, roundly denied that claim. Here is how Bahati’s name came to the fore.

Shortly after last Sunday’s church service at the Mukasa home, President Museveni rang Nebanda’s mother. He informed her that he would be visiting the family in Kitubulu, Entebbe to pay his respects to the deceased. The family called a three-hour meeting that finally agreed to Museveni’s visit. But, according to the family, something unique happened during the presidential visit.

Jovia Kyalisiima Nebanda, the 18-year-old sister to the former MP, mustered some courage and walked to where Museveni was seated. Her mission was clear. Kyalisiima Nebanda later told The Observer: “I asked him why everyone is saying that your government killed my sister?”

In reply, according to Kyalisiima, Museveni said: “It is not true; they are trying to spoil the name of government.”

Museveni later spoke to the mourners, comforted the bereaved family and left. But, Cerinah’s mother had noticed something unbelievable in her daughter, who rarely had the courage to talk at home. She couldn’t fathom where she got the zeal to confront the President without her permission.

“Where did she get the courage? What did she tell the President? Maybe she knows what killed Nebanda!”

These were some of the vexing questions the mother loudly asked herself. And to solve this puzzle, she summoned her two daughters to her bedroom. According to Cerinah’s mother, after Kyalisiima shared with her what she told Museveni, she asked her daughters whether they knew Nebanda’s run-away boyfriend Adam Kalungi, and whether Cerinah had ever discussed him with them.

Their revelations shocked her. Cerinah’s mother said her daughters told her that although Nebanda used to be tight-lipped about her love life. However, there was a particular time this year, when she came home excited about a particular trip to Kalangala. she told her siblings that although she wanted to travel to Kalangala with the Budget committee of Parliament, she first had mixed feelings about the trip until the Ndorwa West MP David Bahati assured her that someone would give her what her mother called “a good time”.

“It is this MP, who connected my daughter to that Adam man,” Cerinah’s mother lamented.

So, on Tuesday, December 18 as the family took part in the requiem Mass at Christ the King Church, she continued to ponder Bahati’s involvement. Later, Cerinah’s mother revealed that she was shocked by Kinkizi East MP Dr Chris Baryomunsi’s submission that Bahati had been part of the team that convened in the Executive Director’s office in Mulago hospital, the day before, to harmonise the direction of the postmortem investigation that later led to the arrest of the hired independent pathologist Dr Sylvester Onzivua.

“Why was this MP at this meeting?” Cerinha’s mother wondered.

Baryomunsi (who also attended) confirmed to Parliament on Tuesday that Bahati attended the meeting that included; senior police officers, pathologists and MPs—Dr Sam Lyomoki (Workers) and Dr Medard Bitekyerezo (Mbarara municipality). On that day after Parliament cancelled the burial arrangements until Onzivua is released and a new team of independent doctors assembled, Museveni called Nebanda’s mother inquiring about the funeral.

Nebanda’s mother told us that Museveni wanted the family to bury on Thursday, December 20, but they declined, citing a parliamentary ruling that resolved that the burial of the Butaleja MP be postponed until the cause of her death has been conclusively established. Parliament resumes today to assess the progress so far.

In a parallel move, Vice President Edward Kiwanuka Ssekandi invited Nebanda’s stepfather Fred Mukasa to the deputy Speaker’s chamber, where he asked him to proceed with the burial. But Mukasa declined the request, arguing that he could not decide on the matter without other family members—especially Bunyole East MP, Emmanuel Dombo. Dombo was later called, but he too refused to oblige.

According to Cerinah’s mother, as Museveni was about to end his phone conversation with her, she mentioned the link between Kalungi and MP Bahati, and the President promised to contact the Ndorwa West MP. Indeed, after 20 minutes, Cerinah’s mother told us that Museveni called her and confirmed that Bahati knew Adam Kalungi, but through Kalungi’s sister.

So, when Museveni confirmed the story, Cerinah’s mother initially decided to keep it to herself and family, until she was prompted by MPs Theodore Ssekikubo (Lwemiyaga), Mariam Nalubega (Butambala Woman), Ibrahim Ssemujju Nganda (Kyadondo East) and Vincent Kyamadidi (Rwampara) to bring it to the fore.

Later, one of them, Kyamadidi told the mother that Cerinah’s relationship with Bahati is not far-fetched because they all attended a talk show on Urban television—that featured Bahati, Kyamadidi, Nebanda and Richard Todwong (minister without Portfolio and in charge of mobilization).

When The Observer contacted Bahati, he promised to issue a comprehensive statement on the matter. In his statement, which is at variance with what the President’s version, Bahati said:

“That I have never known, by name or physically, through phone, or any other contact, the said friend -one Adam Kalungi”. “That throughout my life, I have never linked any man, friend or not, to Hon Nebanda for whatever reason,” he added.

The Observer has learnt that Bahati together with Baryomunsi, Bitekyerezo and Lyomoki were summoned yesterday by police CIID. The summons came, especially for Bitekyerezo, Lyomoki and Baryomunsi, after they refused to attend a meeting summoned by Museveni on Wednesday to discuss the controversies surrounding the mysterious death of Nebanda.  But they have all declined to go to police, arguing that their summons have not been issued through Parliament.