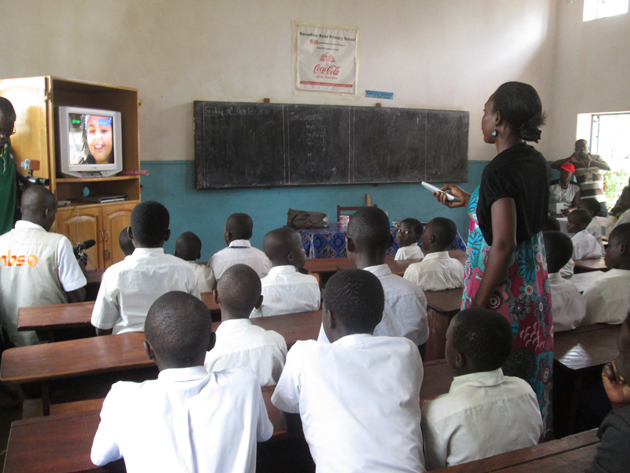 A few years back, Bonny Mulumba, a pupil at Naranbhai primary school in Jinja municipality, hated school. He loathed sitting in class all day listening to the same teachers without any form of entertainment.

To escape the boredom, Mulumba would regularly skip school to hang around video shacks before retreating to his equally boring home in the evening. His grades slipped as a result. However, ever since his school got a TV set two years back, Mulumba has changed his heart.

Now, as he attends the science class about the human reproductive system, it is easy to understand his excitement.

“This is the way of teaching,” declares the 14-year-old P.7 pupil. “I now look forward to coming to school every day because I know I will watch TV.”

Mulumba is referring to the 32-inch TV screen that occupies one of the front corners of his classroom. His teachers now use the TV to demonstrate whatever is being taught. And this is the same in four neighboring schools, thanks to Discovery Channel and Coca-Cola.

The beneficiary schools are: Naranbhai, Kiira, Main Street, Spire Road and Victoria Nile, all in Jinja West constituency. The head teacher at Naranbhai, Jane Bukenya, said the initiative has greatly boosted her school especially in terms of academic performance and reduction in number of school dropouts. She was speaking at a ceremony held at the school last week to mark the official handover of the learning centres.

“Most of my pupils come from poor homes where there is no TV,” Bukenya said. “This project has, therefore, made learning fun by bringing the outside world closer to the pupils.”

Bukenya says the pupil population has tremendously grown from 800 to the current 1,100 since they started video teaching.

“The screen excites children and it is easy for them to remember what they watch than what the teacher tells them,” Bukenya said, priding in not having registered any school dropout this year, a rare feat for a UPE school.

During lessons, the teacher plays a demonstration CD, much to the excitement of the pupils. During breaks, however, children relax by watching music and movies. The facilities are then open to the surrounding communities during the weekends.

“We [residents] are now enlightened about agriculture, Aids and maternal health because we watch a lot of videos about those topics,” said Zakali Kwizera, a local resident.

Kwizera says the youth have benefited most from the project since they no longer have to spend on entertainment during weekends.

“Instead of idling around or going to bibanda (video shacks), they now go to these schools to watch soccer and movies for free,” he said, thanking Coca-Cola for the initiative that has since benefited over one million students, 17,600 teachers and 3m citizens.

In Jinja alone, the project is benefiting 12,200 pupils, 200 teachers and 36,000 residents. The teachers too told their stories. For example, Christopher Gwina of Kiira primary school said video teaching has eased his work. 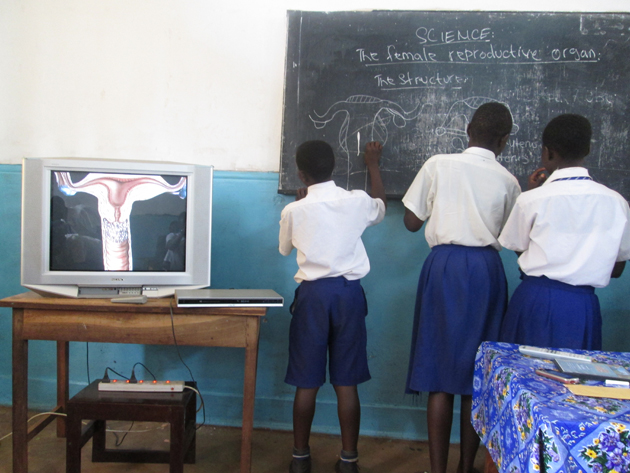 “It has been easy explaining apartheid tendencies using Sarafina film. I also use Apocalypto to teach about slave trade,” Gwina said.

But some teachers say the videos at times distract pupils.

“Most of the children think TV is only for entertainment; so, they demand for more music and films. It is also hard to retain their attention,” said Flavia Mbaiza, a teacher at Naranbhai.

And this view is shared by minister for Higher Education John Chrysostom Muyingo. Muyingo, who was the guest of honour, said video teaching works better when translated in local languages.

“It is our [ministry] policy that the language of instruction from nursery to P.3 be vernacular,” Muyingo said, echoing the pending plan of changing the school syllabus to accommodate local languages.

“We shall continue training teachers and the local community about how to harness the new forms of teaching to better society,” the project’s director, Mashala Kwape, pledged.

The Coca-Cola Uganda boss, Norton Kingwill, said they plan to spread the project to more schools across the country. But clearly, Jinja needed the learning centres most. Though blessed with abundant natural wealth and industrial development, the area still lags behind in terms of education.

And such interventions are touted to be the answer.