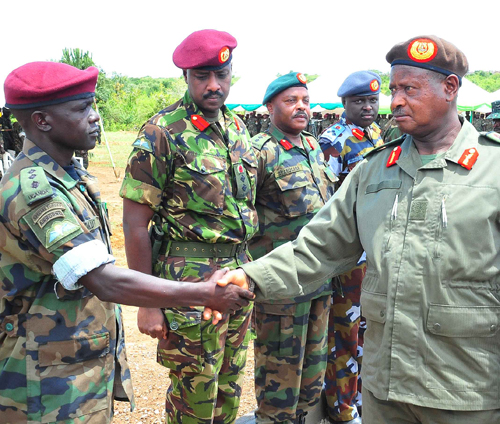 ‘You want to annoy the soldiers and they topple me!’

President Museveni stormed out of a heated caucus with NRM lawmakers on Monday after they failed to buy into his rigid stance on the Defence ministry’s budget. Museveni had told the lawmakers that getting Shs 15bn from the Defence ministry’s budget to cater for the recruitment of health workers amounts to a coup d’etat because security is the most important thing in the country.

Describing NRM lawmakers who harbour such thoughts as worse than their opposition counterparts, Museveni said soldiers – like health workers – are not doing well as they operate on only half their allowances.

“You want to annoy the soldiers and they topple me. If there is no security, there is no peace,” Museveni reportedly said, adding, “Defence is a sensitive area, you want [soldiers] to come on the streets and loot, rape, and cause havoc like those soldiers of the past regimes.”

The President made these remarks during a stormy NRM caucus meeting at State House, Entebbe. He had summoned NRM lawmakers to persuade them to change their extreme stand of not passing this financial year’s budget if Shs 260bn needed to enhance the health sector is not allocated by the government.

However, we understand that Museveni ended up clashing with MPs who insisted that the Shs 260bn is urgently needed. Sources have told us that at one time, the meeting drew a war of words and heated exchanges, forcing Museveni to storm out in protest. He, nonetheless, returned a little later and warned the MPs against causing unwanted chaos in the country.

“It was one of the hottest caucuses ever, Museveni cut wires (slang for became enraged), stormed out a bit, cooled and then returned,” said a source who attended this meeting that started at 3pm and ended at 10pm.

The bone of contention was the Budget committee’s suggestion that Shs 15bn be slashed from the Defence ministry budget and reallocated to Health, something Museveni couldn’t hear of. The President said the lawmakers who proposed this cut had insulted him — as commander-in-chief — and the army.

“It is like you are abusing the soldiers. You don’t value what they do. Relative peace is our core value,” he said.

But this argument was shot down by Lwemiyaga MP, Theodore Ssekikubo, who told the President that much of the money for the Defence ministry is swallowed up by miscellaneous votes such as travel and stationery. Ssekikubo thus insisted that Shs 15bn would not cost security as heavily as Museveni was suggesting.

To this challenge, the President shot back: “Look at this one. You cannot teach me issues of defence. The army moves internally, and that is how we keep security. On stationery, we have army schools. These schools educated children of the soldiers who defend this country. Why do you people want to incite the soldiers? Do you know the repercussions of this move?” Museveni fumed.

Besides slicing money off the Defence budget, the Budget committee had also proposed cuts from the Electoral Commission (EC) and the Uganda Bureau of Statistics (UBOS), but Museveni rejected that too. The President argued that given its importance, the law doesn’t allow the EC budget to be downsised. He also said it would be foolish to cut the UBOS budget when the body is set to organise a population census next year.

However, Workers MP and Health committee chairperson, Dr Sam Lyomoki, pointed out that for more than four years, lawmakers have been complaining about the state of the health sector and government had not acted. Lyomoki added that their budget proposals were as radical as the President wanted to portray them.

“This country needs medical practioners just like the soldiers are needed. But it will set a bad precedent if we show double standards,” Lyomoki reportedly said.

Lyomoki’s view was supported by Dr Elioda Tumwesigye (Sheema North). “We need to save the lives of our people in the villages rather than pulling ropes,” Tumwesigye reportedly said.

Kyakwanzi Woman MP, Ann Maria Nankabirwa, also contributed to this debate, arguing that as a member of the Budget committee, they had to come up with ways of saving the appalling state of the health sector. We have been told that Dr Christine Ondoa, the Health minister, was later invited to shed light on the situation in her sector. Ondoa told Museveni that her ministry is “almost in a crisis”. This forced some MPs to heckle, asking her to explain what she meant by “almost in a crisis”.

Going into some details, Ondoa explained that the Ugandan doctor-to-patient ratio was below the United Nations standard, and that there was urgent need to recruit more health workers, hence the Shs 260bn request.

However, Museveni replied that this was not alarming. He compared it to the military, which, he said, he is well conversant with.

“In the military, we work at half strength or quarter strength when things are bad, but we still deliver the peace, which you people are enjoying,” he reportedly told them.

In the end, Museveni persuaded the lawmakers not to block the budget. Sources say that the President proposed the creation of a committee that would look into the health sector critically and come up with a supplementary budget at a later stage to address the recruitment of health workers. The aforesaid committee will comprise officials from the ministries of Health, Finance, Office of the Prime Minister and members of both the Health and Budget committees.

“Trust me, it is going to be done,” Museveni told the MPs.

Earlier, the Prime Minister, Amama Mbabazi, cautioned the caucus that reallocation of the budget would be in contravention of Article 155 and Section 4 of the Budget Act, which mandates the President to initiate the budget process as well as provide expenditure estimates. However, some lawyers who are also MPs, including Medard Sseggona (Busiro East) and Jacob Oboth-Oboth (West Budama South), disagree with Mbabazi’s argument.

“I have read the two provisions, but there is none that prohibits Parliament to reallocate,” Oboth-Oboth said.
“Anything that the law doesn’t prohibit, it allows,” Sseggona added.