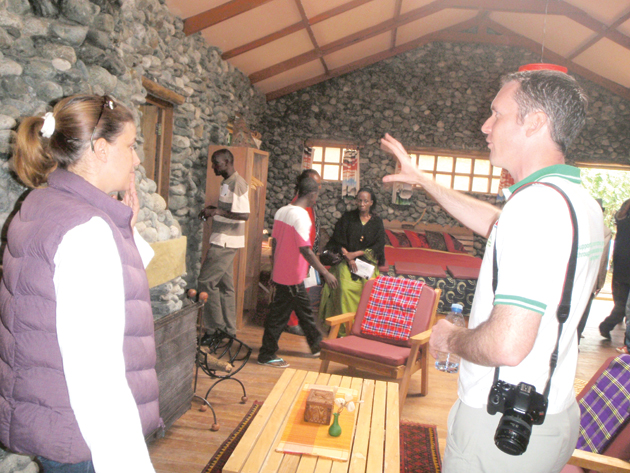 A new short trail and an upmarket lodge could breathe new life into the tourist activities around Rwenzori Mountains national park.

Mahoma Nature Trail, built by Uganda Wildlife Authority (UWA) using funds from USAID’s Sustainable Tourism in the Albertine Rift (STAR) project, is the latest new product in the national park. The trail, which allows visitors to experience the destination in shorter one-to-three-day walks, traverses the lower slopes of the mountains up to Lake Mahoma, where the trail joins the existing Central Circuit trail.

This is the fourth trail and the second nature walk in the national park tucked in western Uganda along the Uganda-Congo border. The other trails include the Central Circuit, run by Rwenzori Mountaineering Services (RMS); Kilembe, run by Rwenzori Trekking Services (RTS), and Kazingo Nature Walk trail, which has been the only trail open to all tour operators since the other trails are privately run.

UWA will manage the new trail. It will be open to all tour operators. “The concessional trails are limited to contracted companies, but the new trail is open to anybody. You don’t need to go through a third party to use it,” said Fredrick Kizza, the park’s Senior Warden.

“This shorter trail is an opportunity for those clients with limited time. Because of the long time needed to climb the mountain, most tourist operators leave out Rwenzori,” he added.

The Rwenzoris are a world-class hiking and mountaineering destination, which were recently voted among the world’s best hiking places. The world heritage site is well known for its extraordinary flora and different vegetation zones. However, the mountain continues to struggle to attract tourists.

According to Kizza, by the year 2000, the park attracted a paltry 600 visitors. This number has since gone up to 2,300, according to last year’s statistics. Kizza says the park has already attracted 2,285 visitors since January, a figure that is expected to shoot to 3,000 by the end of the year.

With better facilities, the numbers are bound to go even higher. Geolodges, one of the pioneers in safari industry, running Nile Safari lodge in Murchison Falls national park, Jacana Safari lodge in Queen Elizabeth national park and Rainforest lodge in Mabira forest, have opened up their latest and fourth lodge in Rwenzori Mountains National Park.

“We hope that the addition of these new tourism facilities and the trail will help to boost tourism to the mountains, increasing revenues for the people of the region as well as [supporting] UWA and Ecotrust in their ongoing conservation efforts,” said Kaddu Sebunya, USAID-STAR’s Chief of Party.

USAID-STAR with support from US Forest Service, and in partnership with Ecotrust, UWA and Geolodges, also boosted the lodge with the construction of an information centre.

The centre, , said to have cost $100,000, is a multi-function facility next to the park, providing information and services for visitors to be able to learn more about the park and the mountain, its people and their culture.