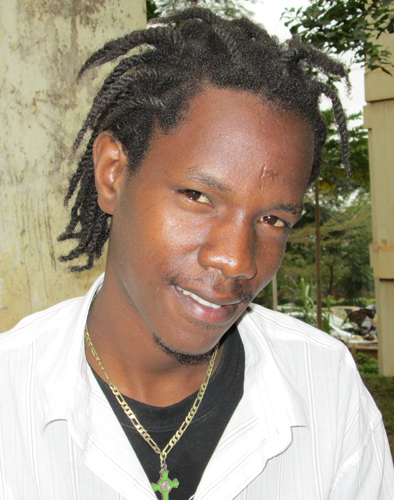 With him is a group of four men who stand motionless in front of a video camera. Kayonga’s head is bent on a script and then somebody shouts, “Action.”

Right on cue, people start talking and moving in a choreographed way; it dawns on me that I have come to see Kayonga in the middle of shooting his latest film, Zilabamuzaale. It will be released next year.

This is Kayonga’s world as a film director and producer, a dream he has nurtured since childhood. His brothers used to bring films at home and young Kayonga got hooked.

“I loved watching movies of any genre and I decided that when I became an adult I would strive to make movies,” he says.

He is living his dream at his production company, Lord Films International. He has made films like Origin of Trouble and True Love.

“I live, breathe and survive on films. It’s my whole life,” he tells me.

At 23, Kayonga is his own boss, but how did he make it in an industry that is still considered young and unprofitable?

“It is all about courage and determination, but the most important thing is that you have to like what you are doing,” he notes.

He began filmmaking in S.3 at Makerere Advanced Secondary School in 2006, together with a friend, Sande Lule who was in S.5. Sande, who then owned a film production house, Ugafilms, asked Kayonga to feature in his film, Abakazi Ssi Mmere.

“I had never acted, let alone in front of the camera. It was very scary for me as I was not sure of myself, but Lule was convinced that I had the character needed for the role I was to play,” he recalls.

Impressed by his acting, Lule hired Kayonga as one of the co-directors in Ugafilms much to Kayonga’s delight. He later co-directed another film, Missing Blood, with Lule. The plot revolved around a woman who almost got married to her halfbrother, whom she didn’t know.

Cut the cord to soar

Although Kayonga was in awe of Lule’s filming skill, the directing duo had a disagreement about selling rights of Missing Blood to Bukedde television. Nevertheless, he speaks highly of him:

“Lule has been very influential in my career as a filmmaker because he trained me about the basics of filmmaking, directing and script writing. With these skills, I have been able to also carve out a career for myself.”

Starting out alone proved difficult because Kayonga needed a lot of money to register his company and convince actors to join him.

“The first year of trying to set up a company and launching me as a movie maker was very trying. I thought about quitting but my mother was always there to support me emotionally and financially.”

He also says people in the industry lack professionalism.

He is dating Jasmine Nankumba, a supporting actress in a film he is currently shooting, True Love. Isn’t it hard to work with her?

“The lines are very clear to us. If it is work, then we get down to business and work and we always make sure we have enough time for ourselves.”

“Ugandans have to start watching movies made in Uganda if the industry is to grow and give us a future.”