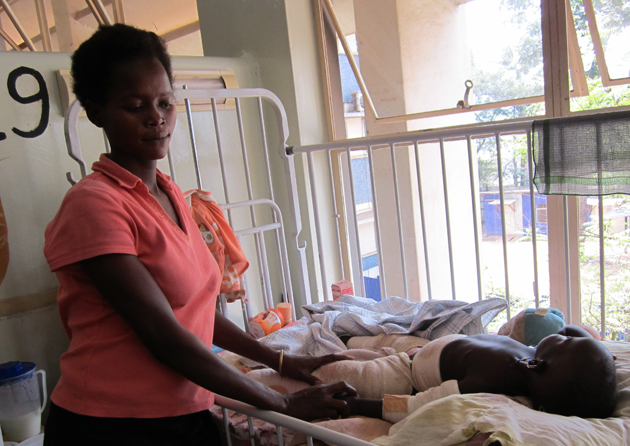 Burns, especially of children, are a burning issue ignored by the health system, report Shifa Mwesigye and Alon Mwesigwa.

Florence Naiga holds her three-year-old son on her laps, waiting for the doctor in the Burns Unit Ward 2C in Mulago hospital. Her head bowed and eyes fixed onto the boy, she shakes her head in disbelief as she tries to come to terms with the pain afflicting her son.
Her son slipped, fell and dipped his head into a saucepan of boiling beans in the kitchen.

“I just heard him scream; later I found he had fallen into a saucepan,” she narrates as tears roll down her cheeks.

The boy’s left side of the head, down to the neck and the face, is swollen; his exposed flesh is red because he was gravely burnt. Beside Naiga is Josephine Mbaine. Her two-year-old son crawled and dipped his hand into saucepan of hot porridge. Around these two women are many more children under five years nursing fresh wounds from burns. They are joined by adults who have been burnt by fire and these patients in Mulago are only a fraction of Ugandans nursing burn wounds.

Dr Robert Ssentongo, a plastic surgeon at Mulago hospital, says about 65% of the patients with burns in the hospital are children and about 80% of these occur with an adult in the house. Many burns are a result of careless handling of fire and heat around the home, an open fireplace here, a pot of hot stuff atop a table. Severe burns happen frequently because a third of the world still uses open fires for cooking, heating or lighting.

Overcrowded living conditions, lack of proper safety measures, loose clothing worn by women and insufficient parental supervision of children are other factors. Violence against women, the disfiguring of girls and women by throwing acid on them or setting them on fire is, tragically, another cause according to a report The Forgotten Global Health Crisis of Burns.

“Why should homes have table cloth? You put hot stuff on the tablecloth and the child pulls it and burns. Parents come here saying it was an accident, I call it stupidity,” Dr Ssentongo says.

Dr Ssentongo says some children are burnt beyond recognition. And a substantial number of them die before reaching the hospital. Most children are burnt from unprotected cooking places accessible to them because they are not child proof.

“The deformities these children get affect them for the rest of their lives, to me that is far more painful than any other burns in this unit. Children should never be in the kitchen because they are neither cookers no cooks,” Dr Ssentongo says.

According to global report, burns are a painful and often crippling disease afflicting 6.6 million people each year. Its victims are frequently disfigured, disabled, stigmatized and shunned. In some parts of the globe, burns affect more children than HIV/AIDS, malaria or tuberculosis.

The report says that more school age girls in the same region die of fires than of tuberculosis, HIV/AIDS and malaria combined; and those who live with burns lose 1.5 times more productive years than those who contract malaria, HIV/AIDS and tuberculosis combined.

“Burn victims often become invisible social outcasts, a burden to their families, hidden from society with little chance of becoming productive citizens. Without proper medical care, burn survivors are forced to live with the economic, physical and psychological scars of disfigurement and permanent disability,” the report says.

Dr Ssentongo says majority of the cases of burns he handles are as a result of mosquito nets catching fire. He says although rarely talked about, nets are the worst agent of fire that can burn children. 24-year-old Scovia Draru, a resident of Nakibizi in Jinja district, knows this sad fact too well.

On New Year’s day, she had gone to the shops when she was called back by her neighbours that her one year old daughter Angel Nampa was burning in the house. The little girl was sleeping when a paraffin lantern fell and the mosquito net caught fire, which spread to the mattress. Her dress also caught fire, burning her legs, arms and private parts in the process.

“I cried so hard because she was seriously burnt,” Draru says.

She took her daughter to Kawolo Hospital in Lugazi, but was transferred to Mulago because Kawolo does not have the capacity to handle such severe cases.

“Her father says that I burnt her deliberately but it was an accident. He left us here with Shs 30,000 and has never returned,” Draru says.

Mosquito nets made of polyester are particularly dangerous; when it catches fire and wraps around someone, it causes deep, severe burns. When distributing free mosquitoes nets in the fight malaria campaign, no one is teaching people about safety and how dangerous they are with fire.

Statistics from the Uganda Burns and Plastic Surgery Institute at Mulago Hospital show that Uganda averages 80,000 burn victims every year. 2006 statistics show that 800 of these are treated at Mulago hospital every year. This translates into nearly three people admitted daily.

Dr Ssentongo says that treating a burn patient is expensive; it normally takes up more resources than an ordinary surgical patient at Mulago hospital. Yet 95 percent of these burns are preventable according to Dr Ssentongo. He says it is the government’s responsibility to tell people to build fire places inaccessible by children.

He says that when government is distributing mosquito nets to fight malaria, it should also teach them how to prevent burns because people don’t know that nets are dangerous.

Mulago hospital has a structure built in 1962 for 3 million people. Now we are 33 million. People don’t have space to handle every case across the country. Some are handled up country. What government should do is equip hospitals upcountry.

“This is the only government burns unit in the whole country; some people come late yet burns care and healing depends on how much care one got when the burn is still fresh,” Dr Ssentongo says.