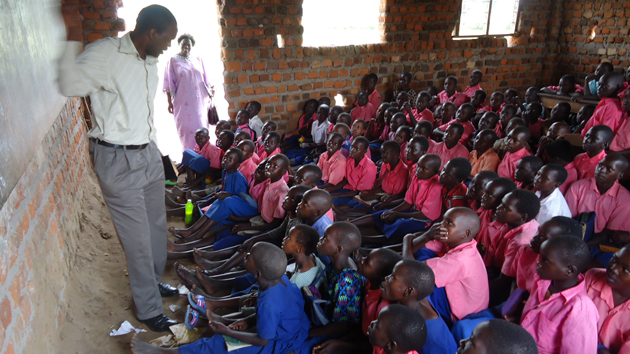 He  only knew his son was making progress in primary four at Kamuli primary school in Kireka. However, this time he looked at the report and realized there was a problem. The boy had scored 24% in Mathematics, 18% in English, 16% in Social Studies and 16% in Science. Emojong, who works as a security guard in Kampala, summoned his son to bring his books for closer scrutiny. That’s when he grasped the depth of the crisis.

“I asked him to read a verse in the Bible and he couldn’t,” Emojong said.

Until now, Emojong was convinced that his son would not end up like him – stuck in an underpaying blue collar job, without any chance of promotion. Clearly his son was not learning much in school because the school was not teaching him. Emojong’s worries echo the findings in the latest report released by Uwezo, an education NGO that assessed 350,000 children in East Africa on their ability to perform basic numeracy and literacy tasks last year.

UNEB chairman Fagil Mandy knows why this is happening; it’s about the teachers.
“Most of our teachers are poorly trained so they are also not teaching our children the basics,” he says.
The good ones, frustrated with the poor terms of work, have jumped ship.

“It is natural to expect that if the teachers are poorly trained and not mentored they would produce poor performing students,” Mandy says.
Mandy acknowledges that although Uganda is major exporter of education in the region, it has fundamental challenges in delivering the service, since its teacher training infrastructure collapsed in the late 1980s.

By contrast, Kenya maintained its teacher training infrastructure and is reaping the benefits. Wilson Asiimwe, a researcher on Education matters, says he is not surprised by Uwezo’s findings.

“Kenya has benefitted from an intensive three year initiative called the school learning programme, where teachers have been specifically trained to encourage reading in primary schools across the country and this has helped greatly,” he says.

Uganda, with its thematic curriculum, finds itself trapped. It is so expensive to prepare the necessary reading materials in local languages.
“Many of these schools have not yet got reading materials and it is unclear when they will get them so teaching can start,” he says.

To compound Uganda’s worries, studies now show that teachers have failed to teach students how to read. A study by Dr. Robinah Kyeyune of the School of Education at Makerere University shows that many teachers use poor methods of teaching how to read.

“These teachers are not taught reading skills so they are unable to transfer them to their pupils and some don’t realize that reading is a taught skill,” she says.
Kyeyune says most teachers use the whole word approach instead of the recommended phonetic sound process, where students are taught to interpret sounds and use those to read.

“You find a teacher reading whole words to the pupils and then waiting for them to respond to what he or she has read, instead of showing them how to read for themselves by showing them which sounds correspond,” she said

Despite the challenges, there is hope for Uganda. USAID has offered a $56m loan to facilitate school health and reading programmes. Kyeyune and Asiimwe believe that Uganda can regain their standing in the region in three years, basing on the experience of Ethiopia, Mali and Egypt. There has also been a marked shift in the public debate towards focusing on quality and learning outcomes.

“Parents and school heads are admitting that they need each other to ensure good learning outcomes and this is a good way to go,” Richard Sewakiryanga of Uwezo says.

Sewakiryanga adds that parents across the region are asking sharper questions that could lead to better policy choices. The Uwezo report shows that there is increased experimentation globally on innovations to spur learning that can benefit East Africa, should we choose to pay attention.

For instance Mandy says that UNEB will endeavour to make exams look at the wholesome growth of the student, rather than theories taught in class.