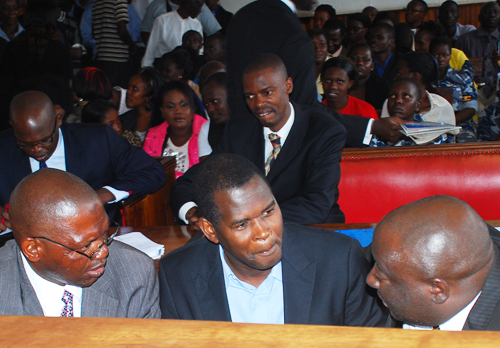 The co-accused are, businesswoman Anita Deborah Kyomuhendo, and musician David Mukalazi. Kayanja, who accuses the pastors of tarnishing his name by alleging that he sodomised some youth in his church, drew first blood this week when the accused failed in their bid to recall prosecution witnesses. The pastors had petitioned High Court after magistrates Patrick Wekesa and Julius Borore ruled against them.

It all started in November of 2011 when, after 11 months of court proceedings, Wekesa ordered the accused to defend themselves after prosecution presented some 21 witnesses. But the defendants accused Wekesa of having been bribed to reach his decision. Borore, who succeeded Wekesa on the case, also refused to consent to the defendants’ demand to recall the prosecution witnesses in April. This forced the accused to petition High Court, claiming that Wekesa’s records were inaccurate. Their petition was, however, dismissed yesterday.

While dismissing the appeal, Justice Lameck Mukasa noted that while the law allows recalling witnesses in some instances, the accused delayed to apply for the same.

“It is my considered view that this particular application does not warrant a revision of the lower court. The application fails and I order that the file be returned to the lower court for hearing to proceed expeditiously,” Justice Mukasa ruled.

Justice Mukasa’s ruling comes a week after another development in which the two parties made counter-accusations against each other. While two of the prosecution witnesses, John Mutumba and Robinson Matovu, last week registered a case with the Special Investigations Unit, alleging that they had been attacked by unknown people in Kampala, the pastors also filed a case at the CID. Pastor Male, on July 26, 2012, complained to Kampala Metropolitan CID boss, Charles Kataratambi, alleging that two DVDs had been delivered to his office, bearing recordings of Mutumba and Matovu confessing that, contrary to what they had said in court, Kayanja did sodomise them.

We have since established that on July 28, Male also wrote to the Inspector General of Police, Lt Gen Kale Kayihura, with the President’s Office, the Chief Justice and ministers of Internal Affairs and Ethics in copy. In the letter, Male calls for an independent investigation into the discs’ contents. Police is investigating the two parallel complaints. The videos, which The Observer has watched, show Mutumba and Matovu apologising to the accused pastors for having given false evidence against them.

Speaking in Luganda, Mutumba claims that Kayanja actually sodomised him more than eight times in different places, including at Rubaga Miracle Centre and at his (Kayanja’s) residence in Bunga, a Kampala suburb. In the video, Matovu, who apologises to various people, including the accused persons, the First Lady, Kayihura and MPs Ken Lukyamuzi and David Bahati, alleges that the CID boss, Grace Akullo, knows how bribery was used to manipulate the case. Mutumba and Matovu, who are under police witness protection, are some of the prosecution witnesses the accused pastors wanted recalled.

The accused, who start their defence next week, have made a series of demands. In his letter to Kayihura, Male, who heads the National Coalition against Homosexuality & Sexual Abuses in Uganda, appeals to the IGP to appoint independent police officers to investigate the new developments. Male also demands investigations into the 2009 “kidnaps of Pastor Kayanja’s aides, Chris Muwonge and Herbert Tumukunde”.

He claims that the kidnaps were an inside job, adding that that is why the CID, now headed by Grace Akullo, who testified as a prosecution witness, never investigated them yet they could vigorously investigate the conspiracy misdemeanor and finally charge the accused.

When contacted on Wednesday, Male said he had found the same video discs in his office on July 25 and watched them before reporting the matter to police. He said he gave copies to Kayihura and Kataratambi. Pastor Kayanja’s aide refused to comment on the matter, referring us to Kayanja himself, who was reportedly out of the country.