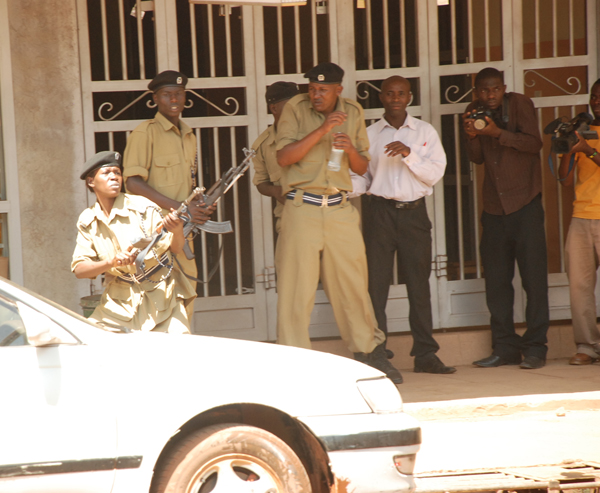 After countless apologies for brutalizing journalists in the course of doing their work, the Uganda Police has moved to compensate journalists for equipment damaged by its officers.

The first beneficiary is William Ntege aka Kyuumakyayesu, a freelance journalist attached to WBS television. The Police has given Ntege Shs 6.3m to replace his two cameras that were spoilt by security operatives while covering the Kampala Mayoral elections and a recent visit to St Balikuddembe (Owino) market for lunch by FDC President Kizza Besigye.

A joyous Ntege told The Observer today that the money was given to him by Police deputy spokesperson Judith Nabakooba. Ntege’s first camera was damaged in late 2011 while covering the Kampala Mayoral campaigns at Nakulabye, where plain-clothed security operatives attacked him and vandalized his camera estimated at Shs 4.5m and took away his Shs 100,000.

“They hit the camera with pistols; later I fell down breaking it,” he said.

This particular incident saw him briefly detained at Old Kampala Police station for a purported traffic offence before he was released after spending a night in custody. He reported the case of assault, malicious damage and theft of property at the CPS. As a freelance reporter, his camera is his means of survival so for him to continue fending for himself, he used his previous savings to buy another camera.

His new camera did survive the police brutality for long, damaged in April 2012, while he covered Dr Besigye and Kampala Lord Mayor Erias Lukwago having lunch in St Balikuddembe market. Ntege confesses that he and another television journalist were standing on a slow-moving Police patrol car so as to be able to take some strategic shots as Police battled Besigye and his supporters.

On seeing them, he says, CPS Division Commander James Ruhweza unleashed police officers, who cruelly pulled him off the police vehicle. In the process, his camera rolled on the ground and stopped functioning. All these two cameras are in police custody. Last week’s compensation, however, didn’t come easily.

It took Ntege a lot of persistence characterized by recording several of statements with Police, many unfulfilled appointments with the Police Chief Lt Gen Edward Kale Kayihura and sit-down protests by Ntege at the Police headquarters on parliamentary avenue demanding to meet Kayihura and compensation for his cameras. On all these occasions, he would be threatened with arrests and also begged to leave the Police premises.

On Saturday June 30, 2012, Nabakooba called him to ask for the value of the cameras, before she later gave him the money. Looking back, Ntege says Police and security agencies need to do move beyond the compensation and apologise and penalize their errant officers.

“Will they keep beating us, spoil our cameras and then compensate us using taxpayer’s money?”

This view is shared by the Human Rights Network for Journalists (HRNJ) who said in a statement: “We are reliably informed that these two incidents were not investigated by the police, and as such no action was taken. This is, therefore, another way of covering up for errant police officers in the force. It promotes impunity and puts the work of journalists in a more dangerous situation at the hands of the same officers who remain occupying their offices and manning police operations.”

Many observers agree that freedom of expression, including media freedom, is under threat, especially from violence from the army and police.