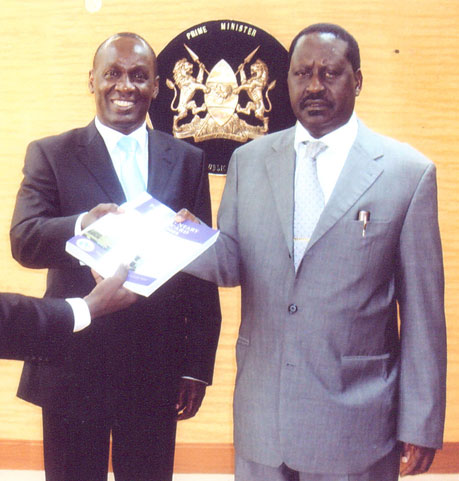 “I have intelligence reports that you received money from Raila to bribe delegates at Arusha. This is the same money Francis Babu used to bribe delegates from other East African countries to support the bid of his wife,” Museveni was quoted as having said during a meeting he called at his countryside home in Rwakitura, Kiruhura district.

Highly placed sources in the ruling party who attended the meeting confirmed to The Observer that the President made this accusation. Babu, the NRM vice chairman for Kampala region, was in Arusha to drum up support for his wife, Margaret Zziwa, who was eventually elected EALA Speaker. Mukula was one of Zziwa’s key campaigners.

It is not clear yet at what stage Odinga picked interest in the election, but sources claim he wanted to humiliate Uganda. Eventually, the incident was a diplomatic embarrassment to Uganda in the region. Museveni called the Rwakitura meeting to reconcile with the Speaker of Parliament, Rebecca Kadaga and Prime Minister Amama Mbabazi, both of whom he had sharply criticised during the NRM caucus meeting of June 18 at State House, Entebbe.

This latest accusation could likely touch off a diplomatic row between the two countries and dent the notoriously fickle relationship between Museveni and Odinga. Mukula, who is NRM vice chairperson for the eastern region, was present during the Rwakitura meeting, which was also attended by members of the party’s highest organ, the Central Executive Committee (CEC).

Mukula vehemently denied the accusations. He said although he and Odinga were friends, at no time did he receive money from the Orange Democratic Movement (ODM) leader for the EALA speakership election. We understand that the camaraderie of Mukula, a former junior Health minister and Odinga, who is leading in opinion polls ahead of Kenya’s presidential polls in 2013, has become a source of numerous investigations by intelligence organs.

Last year, Mukula hosted Odinga for his victory celebrations at his home in Soroti municipality, following his election to Parliament. Odinga returned the favour when he invited Mukula, alongside Museveni, to the launch of a new regional university in Kisumu early this year. Mukula, who has not ruled out contesting for the presidency in 2016, was quoted by the whistleblowing website WikiLeaks as having revealed to former US ambassador to Uganda, Jerry Lanier, that Museveni was grooming his son, Col Muhoozi Kainerugaba, to succeed him.

However, Mukula last week denied having been accused at the Rwakitura meeting.

“No; that is not correct. We didn’t go to discuss anything to do with money,” he told The Observer on phone.

Babu also denied receiving a war-chest from Odinga to support his wife. However, Babu, a former junior Housing minister, said he had no choice but to back his wife because Kadaga and Mbabazi were supporting Dora Byamukama for the EALA speakership.

“I don’t want to speak about Rwakitura and you know the meeting was closed. Please, I will not say anything,” Babu told The Observer.

The acting NRM whip, Daudi Migereko and his deputy, David Bahati, did not return our calls. Kadaga and Mbabazi, whom the president recently criticised for anointing Byamukama as the NRM flag bearer for the EALA speakership without seeking the caucus’ consent, reportedly fought valiantly at the meeting to clear their names. They told Museveni that they were not to blame for the fiasco in Arusha because they had fruitlessly tried for five days to seek audience with him.

A source claims that Mbabazi told the President that he had telephoned him for five days in a bid to seek his opinion on who should be the flag bearer without any success. He later consulted the minister in charge of East African Community Affairs, Eriya Kategaya, on the matter. It was then, Mbabazi said, that the NRM decided to back the consensus candidate after an internal poll amongst EALA delegates from Uganda voted overwhelmingly in favour of Byamukama.

On her part, Kadaga said by the time she travelled to Arusha, she was only aware of one NRM flag bearer — Byamukama. Kadaga added that although she went to Arusha, her objective was not to campaign for Byamukama.

Museveni, taken aback by the recent fissures and jockeying within the party, then said it appears that the relationship between Kadaga and Mbabazi had thawed. Kadaga, Mbabazi, Migereko and Bahati were reportedly seated at the same side of the table. In response, Kadaga reportedly said she had never had a problem with the prime minister and that media reports indicating the contrary had been peddled by people with their own agendas.