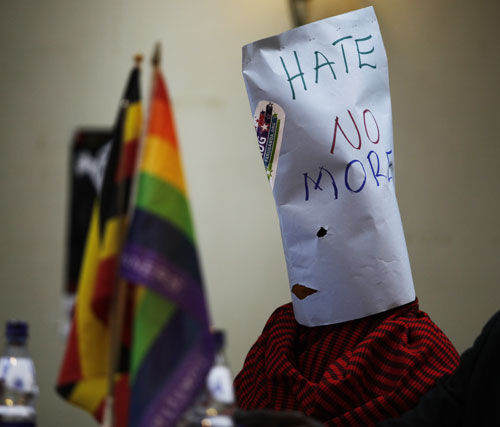 The government says it has intercepted minutes of a recent meeting that discussed wide-ranging strategies on how to promote the rights of lesbian, gay, bisexual and transgender (LGBT) people in Uganda.

These strategies include how to raise funds and recruit ‘friendly’ journalists into the cause of fighting for homosexual rights in Uganda. Some sources have told The Observer that security operatives infiltrated gay groups and managed to get a document containing minutes of the meeting.

The unsigned document, a copy of which we have seen, names 41 people, from 23 NGOs, as having attended the meeting on May 4, 2012, under the coordination of the Civil Society Coalition on Human Rights and Constitutional Law (CSCHRCL).

The organisations in attendance, we have been told, are among those that the government is threatening to ban because of their LGBT advocacy work. The document shows that this was the 7th such strategy general meeting.

Icebreakers Uganda, which hosted the meeting, is a community-based organisation that supports the rights of LGBT people in the country. The NGOs discussed, among others, “developing a media strategy and strategic arguments against all the sexual bills and for decriminalisation” with a view to “changing opinions and convincing the public”.

This strategy involves “mapping out friendly journalists, as well as hostile and ignorant ones” with the objective of “identifying trainable journalists to become allies and objective reporters on sexual minority and gender identity issues”.

The plan is to raise a list of “40 journalists of a mixture of friendly, hostile and ignorant”. The strategy, whose aim is “gaining acceptance for the sexual minority groups”, with a time frame of June 2012 to June 2013, lists among its activities, workshops, talk-shows, barazas and parliamentary advocacy programmes for legislators.

The plan is to roll out implementation of the strategy through civil society groups spread throughout the country. There is also a well laid-out plan to lobby the national, regional and international community to pile pressure on the Uganda government to abandon the Anti-Homosexuality bill and any other laws hostile to homosexuals.

The document has reportedly given Rev Simon Lokodo, the minister in charge of Ethics and Integrity, ammunition to go after gay activists with renewed zeal. Shortly before leaving for an official trip abroad last week, an excited Lokodo, upon seeing the document, said he had finally obtained the information he needed to fight homosexuality in Uganda.

“These people are disruptive; they are promoting a negative culture contrary to the laws of this country. They are promoting homosexuality and lesbianism as an acceptable culture, and this is ruining our lives,” Lokodo said.

He added: “This is not going to stop. We will support the bill. There is now sufficient evidence to move against these evil people. We’ll punish them with a deterrent punishment. We are looking for a day when this law is going to take shape.”

Last Wednesday, Lokodo announced that the government would ban 38 NGOs deemed sympathetic to activities of LGBT people in the country. He said he had passed the list of the NGOs to the Internal Affairs minister to get all of them deregistered, as they were engaging in an illegal activity. Lokodo told journalists that the NGOs were receiving support from abroad and “recruiting” young children into the vice.

“We found that, on the pretext of humanitarian concerns, these organisations are being used to promote negative cultures. They are encouraging homosexuality as if it is the best form of sexual behaviour,” he said.

The previous day, the police had halted a workshop of gay rights activists at Esella country hotel in Najjeera, in the outskirts of Kampala, and briefly detained some participants and staff members of the East and Horn of Africa Human Rights Defenders Project (EHAHRDP), one of the organisers of the event.

Njoroge Njenga, a programme officer with Freedom House, an American NGO, while admitting knowing some of the names of participants at the strategy May 4 meeting, said he was not aware of the specific details of that meeting, because he had only recently arrived in Uganda.

Neil Blazevic, one of the activists detained together with Njenga last Tuesday, is named as participant number 29 on the attendance list of the May 4 NGOs’ meeting at Ice Breakers Uganda.

Article 31 (2a) of the constitution, as well as provisions of the Ugandan Penal Code Act, prohibit same sex relationships. Two years ago, Ndorwa West MP, David Bahati, moved a private member’s bill, the Anti-Homosexuality Bill 2009, seeking to impose tougher punishment for promotion of, and involvement in, homosexuality.

Although the bill enjoys ample support across Uganda, western governments have piled pressure on Kampala to stop the legislation on human rights grounds.  Last week, Bahati, while commenting on the latest campaign against gay activists, said his bill intended “to stop the promotion, recruitment, funding and same sex marriages”.

He insists that Uganda must stand firm and reject attempts by people who want to promote activities of LGBT people, adding that homosexuality is not a human rights issue in Uganda because it is illegal.

When told about the meeting minutes that Lokodo’s people had found, Bahati said: “If it is true that such a document has been [obtained], it serves to strengthen what we have been talking about; that these people are deliberately recruiting followers and promoting their actions, taking advantage of a weak law. We now need to move and strengthen the legal regime and make the punishment more stringent.”

However, organisers of the now controversial meeting are defiant. Jeff Ogwaro, the national coordinator of CSCHRCL, told The Observer yesterday that the NGOs had been meeting monthly for about six months. He, however, denied any wrongdoing.

“I am surprised that government does not know its own laws,” Ogwaro said. “We are promoting human rights, just like those promoting children’s rights… but we don’t have a curriculum that teaches people how to have [gay] sex. Lokodo needs to be educated. He is ignorant.”