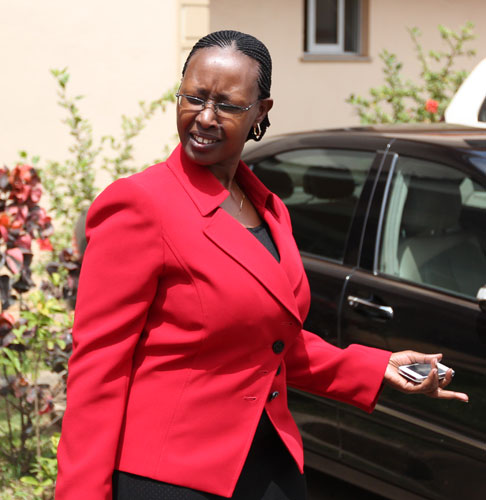 The Anti-Corruption court yesterday convicted a former State House aide, Alice Kaboyo, after she pleaded ‘guilty’ on four of nine counts in the Global Alliance for Vaccines and Immunisation (Gavi) case.

Kaboyo, co-accused with three former Health ministers, was sentenced to a fine of Shs 20m or an eight-year prison term. She chose to pay for her freedom.

Five years ago, former Health minister Jim Muhwezi, his deputies Mike Mukula and Dr Alex Kamugisha, and Kaboyo, were charged with mismanaging billions of shillings under the Gavi project.

Unlike the ministers who are facing several charges of alleged theft, causing financial loss, uttering false documents and embezzlement, Kaboyo (bar one count where she had been co-charged with Muhwezi) was facing seven other counts that included abuse of office and writing documents in the name of the former Private Principal Presidential Secretary, Amelia Kyambadde.

Early this year, the four accused persons voluntarily withdrew an appeal they had filed in the Supreme Court, contesting their trial at Buganda road court. The case was later transferred to the Anti-Corruption division.

However, when the case, whose trial resumed on Monday, came up for further hearing today, Kaboyo’s lawyer, Bob Kasango, told the presiding magistrate, Irene Akankwasa, that his client wanted to change plea on some counts.

Kaboyo accordingly pleaded guilty to two counts of abuse of office and writing documents in Amelia’s names. Kasango pleaded to court for a lenient sentence saying his client was a first offender who had a lot of responsibility and had not wasted court’s time and resources.

He further submitted that out of the Shs 524m allegedly advanced to her to prepare advocacy conferences, some of which were supposed to be presided over by First Lady Janet Museveni, she had already refunded Shs 250m.

Sydney Asubo, prosecuting the case on behalf of the Director of Public Prosecutions, who took over from the Inspectorate of Government, welcomed Kaboyo’s change of plea on counts 11 to 14 and promised not to call prosecution witnesses to testify against her in count three where she is co-accused with Muhwezi, or the other counts.

According to court records, Kaboyo was advanced the Gavi funds after she had resigned her post. After a 20-minute adjournment, Akankwasa sentenced Kaboyo to Shs 5m on each of the four counts or a prison term of two years on each counts.

“This seemingly light sentence is justified because A4 now a convict has not wasted court’s time. In the case of default to pay the said sum, the convict will serve the sentences concurrently [meaning two years],” Akankwasa said.

On Monday, testifying during cross examination, the prosecution witnesses Gustavo Bwoch (the Accountant General), and Dr Issa Makumbi (ministry of Health’s head of Epidemiology/Surveillance), told court that they did not have proof that the former ministers put the Gavi funds to personal use.

“Your honour, these three ministers were the best performers and I’m part of their success; that is why Uganda got a bonus of $4.3m as an additional Gavi fund after excellent work in the immunization of children. These ministers were drivers and I was a turn boy,” Dr Makumbi testified.

Makumbi further told court that they were not even part of the committee that planned and approved spending Gavi funds. On his part, Bwoch told the fully parked court that he did not receive any report that Gavi funds were stolen from the respective bank accounts or mismanaged for that matter.

Makumbi and Bwoch are part of the three state witnesses that had testified in 2007. Yesterday, another witness, Jimmy Lubwama Musasizi, the  former Senior Accountant tendered several documents to court  some of which were written by Mukula to Muhwezi, others covering letters from State House, requesting for funds ranging from Shs 36m to Shs 310.4m to organize health advocacy and promotion conferences in different parts of the country.