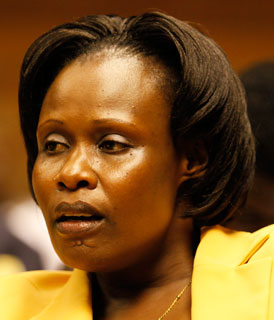 Parliament has directed the Commission of Inquiry into the mismanagement of funds under the Universal Primary and Secondary education be wound up for failure to deliver.

Three years later, however, there has not been even an interim report, as the education minister, Jessica Alupo noted in her statement to Parliament yesterday. Instead, the commission has been asking for extensions.

The commission, set up by President Museveni, was supposed to produce its findings within six months of establishment, but three years later, there is not a single report and yet Shs 6bn has been spent on its activities. At yesterday’s sitting, a motion was moved that the commission be wound up, that government should extend any additional funding, that the Auditor General conducts a special audit into the commission’s funds and that Parliament’s Social Services committee pursues the issue further.

The commission members are: Justice E. Muhanguzi (chairperson), Dr Nassali Lukwago (deputy chairperson), Lawrence Mukiibi, P.M Batumbya and Keturah Katunguka (secretary and counsel). Alupo’s statement followed an inquiry last week by Serere Woman MP, Alice Alaso, seeking to know the progress of the commission of inquiry. In Parliament yesterday, emotions run high, as legislators debated the minister’s statement. Leader of opposition, Nathan Nandala Mafabi, called for the arrest of the commissioners: “This justice (Muhanguzi) has not done justice to us. None of you should steal public money and we leave you!”

Many of the MPs were in unison that Alupo’s explanation was unconvincing.
“I am dismayed that money is being allocated for a commission which has no output,” said Monicah Amoding (NRM, Youth National).
“This is a lot of money and, given the situation we are in today, we shouldn’t spend more money on [the commission],” said Tim Lwanga (NRM, Kyamuswa) who also chairs the Budget committee of Parliament.

The UPE and USE programmes, although popular in rural areas, have come under a lot of criticism over their management and the quality of products they churn out. Last year, a report by Uwezo revealed that approximately 20 percent of primary three (P.3) pupils in UPE schools could not recognize the letters of the alphabet, compared to eight percent of their counterparts in private schools; and one percent of P.3 children under UPE could read and comprehend, compared to eight percent in private schools.

On teachers’ attendance, the report said on average, teacher absenteeism was 12 percent. It is this mischief that the commission intended to investigate and make recommendations, but with the suspension, it will be a while before interventions can be put in place. Speaking to The Observer after the proceedings, Alupo said she was uncomfortable with the Parliament resolve, adding that this means taxpayers’ money was put to waste.

“I thought that my statement was seeking enrichment from the House to find a way forward on how the work of the commission can be completed,” she said.
Actually, as she stated in her statement, Alupo wanted Parliament to extend the commission’s tenure to October.