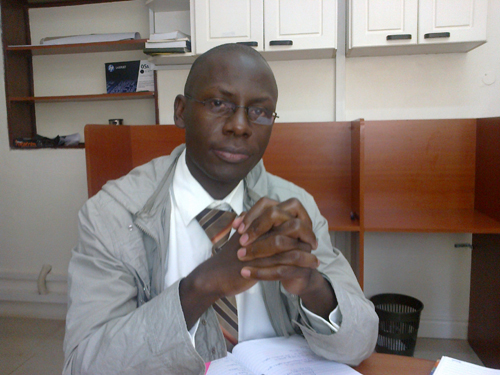 He is part of the multi-disciplinary team that is investigating the Nodding Disease outbreak that has claimed hundreds of lives in northern Uganda since 2009. Kakaire Ayub Kirunda spoke to him about the ongoing investigations and the science of investigating diseases. Below are excerpts:

Why has it taken long to know what causes Nodding Disease and how it spreads?

Nodding Disease is a relatively new medical condition whose occurrence is sporadic. The disease has previously been reported in some African countries such as South Sudan, Tanzania and Liberia, according to available literature. It is an emerging disease and this means that its cause has not yet been fully established by the medical world, but is currently under investigation. Nodding disease presents with brief rhythmic chin to chest movements of the head (nodding) which are triggered by the sight of food.

Then it is followed by loss of consciousness and convulsions. Over time, people with this disease suffer mental and physical retardation, as well as malnutrition. Important to note is that nodding disease is not contagious. But all I can say is that everything is being done to understand what within the body causes this condition.

Talking of fits, is this a new form of epilepsy as has been reported?

Nodding Disease is a rare form of epilepsy characterised by abnormal electric activity within the brain. In the case of Nodding Disease, affected children start by nodding and then present with fits that are similar to other forms of epilepsy.

Why then are the children being treated with epilepsy drugs when this is said to be an emerging disease?

Like I said, this is epilepsy. Therefore, the common medicines for treating epilepsy can also be used to control fits in these children with Nodding Disease to ensure that they can live a relatively normal life like other children. In addition to this, the management of these children requires a holistic approach that addresses the psychological, social, and nutritional needs of the sick child and the caretakers. It is also important to create a stimulating environment to improve brain development and functionality.

Could the weaponry used during the northern Uganda insurgency be partly responsible for this condition?

We do not have any scientific evidence to justify this allegation. However, what we know is that similar cases have been previously reported in places with no history of war.

So have you learnt anything from the investigations done so far?

Yes, we have learnt something. We know what the trigger factors are. We also know that River Blindness is a probable predisposing factor. These revelations have informed the control, treatment and health education strategies. The findings provide a good background for further investigations.

Have you done some comparisons with studies from Tanzania, South Sudan or even Liberia where head nodding has occurred?

Yes. We have. The experts who participated in previous outbreaks are part of the team conducting the ongoing investigations. The findings of their investigations are guiding the national control strategy for Nodding Disease.

Have you tried to do autopsy studies to help with the investigations?

Yes, pathologists from the ministry of Health conducted post mortems on a few reported cases. The specimens have been analyzed by experts from Uganda and the US Centers for Disease Control and Prevention (CDC) in Atlanta to investigate the cause of the disease. But still, we did not come up with anything to pin point the pathogenesis of this disease.

So how should parents with children in the 5 -15 age group that is usually affected sit back and relax without fear of their little ones being at risk?

The parents in the affected communities need to be sensitised to look out for the symptoms of the disease, especially in children who have not previously suffered from Nodding Disease. In this way, they will be able to report early to the health centres so that the affected children receive thorough clinical assessments and timely treatment for better health outcomes.

If you do not know what causes a disease and how it spreads, are there any minimum public health measures that can be taken to protect the population?

Based on this finding, the ministry of Health and its partners have instituted public health measures such as mass treatment for River Blindness as a public health measure to indirectly mitigate what could possibly be a predisposing factor to Nodding Disease. Community mobilisation and sensitisation to educate the public about the disease are also being carried out.

Some would say you seem to have hit a wall, is there need for further research into this?

Like I mentioned previously, Nodding Disease is an emerging disease and it warrants continued research to understand its risk factors, the cause, and the manifestations that we see. Many of the diseases that we know today were studied over time and some are still under investigation to date.

Seemingly traditional diseases like TB, HIV, malaria, cancer, were understood after many years of research. The investigations are still ongoing.  We are now putting together the information that has been gathered in the last couple of years for the ministry to come up with a rehabilitation plan. This will entail treating those children and controlling the epilepsy so that the children can live a relatively normal and healthy life. If they are given the psychosocial support, they can be able to go to school, feed well, and we hope they can grow into productive citizens of this country.

With all that you have said, it looks like disease investigation costs a lot; what kind of resources go into it?

I cannot tag a monetary figure to the investigation. But one thing that I can assure you is that it is very rigorous. To be able to conduct a comprehensive disease investigation, you need technical expertise and equipment and these require a lot of funding. These resources are required for detailed investigations and also rehabilitating the affected children to help them develop normally.

And as medical people, regardless of how much money is put in, our priority is to save lives. But once we have comprehensively investigated this problem, come up with some groundbreaking findings, it will be something great. For now our worry is not how much we need to put in but at the end of the day how much can we do to ensure that we protect these children and help them recover to live a normal, productive life like their peers.