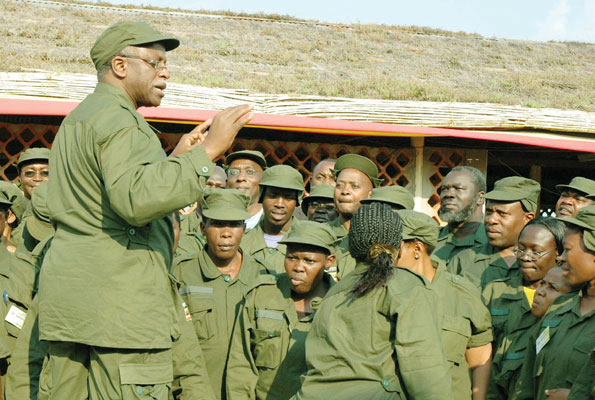 President Museveni has asked his trusted Prime Minister and NRM secretary general, Amama Mbabazi, to stop a court petition lodged by his supporter, who is challenging the parliamentary resolution requiring him to step aside.

Parliament, on October 11 last year, passed resolutions demanding, among other things, that Mbabazi and ministers Sam Kutesa (Foreign Affairs) and Hilary Onek (Internal Affairs) step aside following allegations that they had received bribes from oil companies in return for favourable contracts. Parliament also resolved to constitute an ad hoc committee to investigate the oil sector, particularly the bribery allegations.

Kutesa stepped aside, but Mbabazi and Onek refused to step aside. Kween MP, Abdi Chemaswet, then moved a motion seeking to hold them in contempt of Parliament. Subsequently, the Speaker of Parliament, Rebecca Kadaga, directed the committee on Rules, Discipline and Privileges to investigate the matter. However, the Constitutional Court abruptly halted their proceedings, following a petition by one Saverino Twinobusingye, a lawyer and voter from Kinkizi West, Mbabazi’s constituency. Twinobusingye is challenging the legality of the resolutions.

At State House on January 27, The Observer has learnt, Museveni and Mbabazi disagreed on how to handle the matter. The President expressed the view that for the good of the government, his premier should prevail on the petitioner to withdraw his petition, but Mbabazi insisted that this was not possible legally. This transpired during a brief meeting that was also attended by Rebecca Kadaga (Speaker of Parliament), Jacob Oulanyah (Deputy Speaker), Harriet Lwabi (Solicitor General) and parliamentary commissioners Emmanuel Dombo (Bunyole county East MP), Jalia Bintu (Masindi Woman MP), Elijah Okupa (Kasilo county MP), Dr Chris Baryomunsi (Kinkizi East MP) and Leader of Opposition Nandala Mafabi (Budadiri West MP).

Sources privy to the discussions have told The Observer that Museveni began by asking for a brief about the forth-coming Inter-Parliamentary Union meeting (IPU), raising questions on security. He reportedly asked Kadaga to work closely with security agencies to ensure that terrorism is prevented — since many dignitaries, including 160 speakers of parliaments and more than 2,000 legislators, are expected to attend the meeting here in March. After Kadaga had briefed Museveni, the meeting shifted to the oil petition.

According to our sources, Museveni described the move [to challenge the parliamentary resolutions in court] as antagonistic and detrimental to the doctrine of separation of powers. The President told the meeting that he was not happy with the friction between the executive and Parliament that has rocked government since MPs embarked on the oil debate last October.

We have been told that Museveni, who said he believed Mbabazi was behind Twinobusigye’s petition, narrated a bush experience to make his point.

“When we were in the bush…I noticed two groups that used to antagonise us: the state actors and non-state actors — the rebels. This man Saverino is a non-state actor... So, by continuing with the case, you are antagonising the state,” Museveni said. “I want this thing to be withdrawn,” he stressed.

However, sources said Mbabazi explained to the meeting that the Constitutional Court is expected to give its ruling on the matter this week, so it would not be possible for Twinobunsigye to withdraw the case at this stage.

“Your Excellency, it is not possible to withdraw the case because court has already ruled and we expect the final ruling next week,” Mbabazi reportedly said.

He also informed Museveni that Parliament has already appealed against the court’s first ruling. But the Solicitor General, Lwabi, reportedly told the President that it is possible to withdraw the case. The Constitutional Court last year dismissed an application by the Parliamentary Commission seeking to become party to Twinobusingye’s petition. But this was turned down by the court.

“The desire of the Parliamentary Commission is constitutionally unsustainable. The application is not allowed,” the panel of five justices led by Deputy Chief Justice, Alice Mpagi Bahigeine, ruled.

But Kadaga told Museveni that the court was wrong and that is why the Parliamentary Commission has appealed. During the meeting, Mbabazi reportedly accused Kadaga of instigating a group led by Theodore Ssekikubo (Lwemiyaga), Wilfred Niwagaba (Ndorwa East) and others to fight him. Sources have told us that Kadaga fought back, saying Mbabazi has wired the President into thinking that the Parliamentary Commission is fighting him and pushing for avenues to find him guilty of contempt of Parliament.

“If members bring a motion (contempt of Parliament) that is in line with the law and our rules of procedure, I cannot stop it. It is for the House to decide,” she said.
Her deputy, Oulanyah, supported her.

“We had consulted and we thought the best way was to send the motion to the committee on Rules, Discipline and Privileges so that lawyers can decide whether there was contempt of court,” Oulanyah explained.

Dombo joined in: “Your Excellency, the Prime Minister should stop the bias; he needs to work with us [Parliamentary Commission] better.”
With the debate continuing, Museveni adjourned the meeting and scheduled another for tomorrow, February 2.
“Let’s hope that court does not come up with a ruling before we meet again,” he said.

We have been told that Museveni summoned the Parliamentary Commission after Baryomunsi, Mbabazi’s rival in Kanungu district, asked the premier during the recent NRM retreat in Kyankwanzi to explain how the executive would handle the rift between himself (Mbabazi) and Kadaga, which Baryomunsi said is constraining the operations of Parliament. Citing Twinobusingye’s petition, Baryomunsi told Museveni that Parliament had instructed the Attorney General Peter Nyombi to defend government, but the minister had instead decided to support Twinobusingye’s petition.

“What does this mean for the party?” Baryomunsi asked Museveni.

Sources said Museveni at first challenged Mbabazi to explain himself. The premier, who first told MPs he did not know the said Twinobusingye, later conceded after Baryomunsi stressed that the man was Mbabazi’s former political assistant. To settle the issue, Museveni promised to meet the parliamentary commissioners after the retreat.