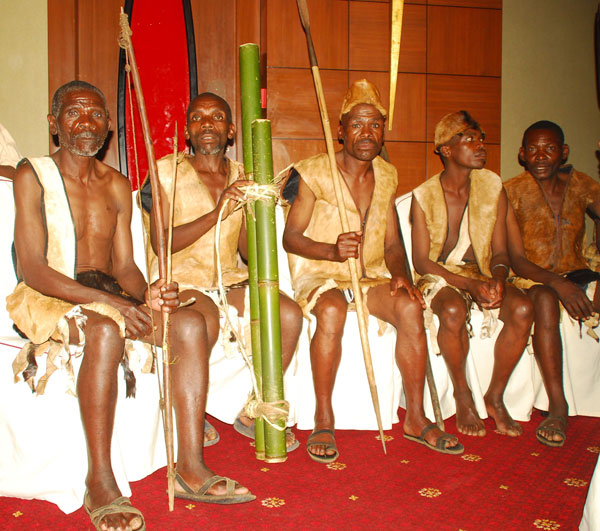 The story of a neglected tribe, wandering with no place to call home

It’s a humbling moment listening to 41-year-old Steven Barahirwa recite the Batwa golden days in the jungle. It is a moment that leaves you torn between fighting to protect the environment or allowing the Batwa to resume their genetic life in the forest. Barahirwa’s touching story brings into focus the old debate about animals versus people.

To many people, the jungle is the least place they would think of living, but to Barahirwa and his fellow Batwa, it’s home. Yet ageing Barahirwa has never lived in the forest, although he talks about it with fondness. The Batwa were made to live in the forest, Barahirwa says. And with the growing cultural tourism whereby tourists are looking for cultures that are still intact, perhaps the government should have appreciated their way of life and developed sustainable means of their co-existence in the forest, he argues.

“You forced us out of the forest into an environment, which doesn’t accept us; where we are segregated and treated like outcasts - often not permitted to eat or sit with others or use wells at the same time,” Barahirwa complains.

He adds: “We have to struggle to get items such as cooking utensils, cups, clothes, etc, which we did not need before.”

Wearing some attire made out of animal skin, with a spear in his right hand, Barahirwa who was recently in Kampala for the first time to fund-raise for his kin, he emphasised that the Batwa were ordained to live in the forest by their creator, Gahinga. 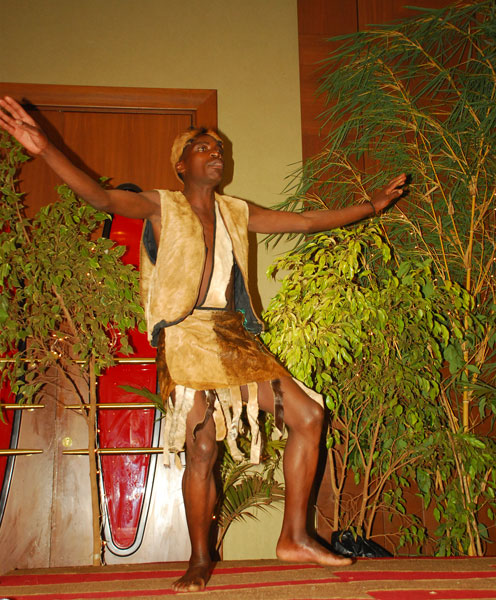 No matter where you take them, their heart belongs to the forest. This was evident at Sheraton Kampala Hotel as the Batwa pimped up Victoria Ball Room into some sort of a jungle. Right from the entrance, you went through a jungle with shrubs lined up on either side. Even the stage was decorated with tree branches, and it’s on this stage that the Batwa led by Barahirwa told their story.

Gihanga had three sons: Gatwa, Gahutu and Gatutsi. One day he wanted to test their abilities. He prepared three jugs of milk and left the sons to sit around the fire through the night. When he woke up the next morning, Gatutsi had a full jug, Gahutu had drunk half the milk, and Gatwa had nothing left in his. Their father, Gihanga, decided to give them gifts and talents accordingly.

Gatutsi got herds of cattle and grazing land, and was told his children would always have enough food and milk. Gahutu got a hoe and fields to farm and was told he would have good houses and a good life. Gatwa received only a bow, arrows and a spear, and Gihanga told him his life would depend solely on the forest. Legendary Gatwa and his tribe, the Batwa, survived by hunting small game using poison-tipped arrows or nets, and gathering plants and fruits that the natural forest has to offer.

Small, temporary huts constructed with leaves and branches served as their temporary dwellings. Their tools were remarkably pre-stone age in the exotic trans-boundary greater Virunga forests on the border between Rwanda, Congo and Uganda. Until recently, the forest people, who are said to be the oldest inhabitants of the Great Lakes region of Africa with their societies dating nearly 60,000 years, compared to 14,000 years for most of the people of the world, did not associate with other communities.

Their first contact with other people in Uganda came around 2,000 years ago when Tutsi pastoralists and Hutu agriculturalists migrated north from what is now Rwanda in search of more land for agriculture. The change in politics that came with colonial rule also had a brutal impact on the Batwa. Whilst their patronage to the Batutsi continued under Belgian rule, the advent of British rule in 1909 marked the time when the Batwa lost the last of their political and economic resources.

In the 1930s, the colonial powers occupying the area created forest reserves in south-western Uganda, evicting many Batwa from their ancestral lands but permitting them access to the forest for hunting, fruit gathering and cultural practices such as burial and worship. By the early 20th century, the Batwa had changed from being largely unhindered occupants of the forest to marginalised communities reliant upon ever decreasing resources. The Bahutu agriculturalists and Tutsi pastoralists needed land, and the Batwa’s forests provided that and more.

In 1991, Mgahinga area was gazetted as a national park to protect its rich biodiversity and the endangered mountain gorillas within its confines. In the process, the Batwa were now completely evicted from the park. With no land titles, they got no compensation. Access to the forest and all the traditional activities of the Batwa were henceforth prohibited. This resulted in a complete loss of the Batwa traditional economic, social and cultural modes of expression.

Yet the Batwa had never had a history of hunting gorillas. In fact, they treated them with reverence. Barahirwa explains that when they look at a gorilla, they can tell it is human by looking at its eyes and as such it should not be hunted. The Batwa even refused to help the white explorers in tracking the gorillas early in the colonial days because they knew the animals would be killed. Further still, the Batwa did not cut down trees because they never practised agriculture.

They didn’t need timber for building either. While in the forest, Barahirwa recalls that all their ancestors needed was bamboo trees that served as their jerry cans to collect water and saucepans to cook, and a few branches and leaves for making shelter and cooking. Today, Barahirwa lives in a grass-thatched hut covered with dry banana leaves in Musasi village, Rukongi parish, Nyarusiza sub-county, Kisoro district, where the father of six survives by working as a casual labourer on other people’s gardens.

In 2000, the Batwa had an under-five mortality rate of 38% compared with the national average of 18%. With a life expectancy of only 28 years and an annual income of $25, their very existence is severely threatened. No official figures exist, but estimates place the Batwa population in Burundi at 30,000-40,000, in Rwanda at 33,000 and in eastern Congo at 90,000.

Uganda is the only one of the four countries with census data; the 2002 census results showed Batwa numbered 6,705, which is 0.03% of the population.
According to Barahirwa, following their eviction from the park, the Batwa feel they have become separated from their spirits, which has made the spirits angry and is one of the reasons behind the bad fortune surrounding them.

For the Batwa, the forest is the womb from which they were born and the only place where they truly belong. For example, among its many secrets, the Gahinga mountain hides an underground lava tube, the Garama cave. All Batwa see the cave as an important part of their cultural attachment to the forest as their king’s palace (Ulutale).

The fund-raising spearhead by Uganda Wildlife Authority (UWA) was intended to raise funds for the Batwa to acquire land and get shelter. The inaugural fundraising raised Shs 12m that went to fund the United Organisation for Batwa Development in Uganda (UOBDU).

Recently, in an effort to find a sustainable revenue generating project for the Batwa, Uganda Wildlife Authority (UWA), UOBDU and Kisoro local government, with financial support from the International Gorilla Conservation Programme, Greater Virunga Trans-boundary Collaboration and USAID STAR Project and the Netherlands Directorate General for International Cooperation (DGIS) developed the Batwa trail, a new culture-packed experience that would spawn income for the improvement of the Batwa livelihood.