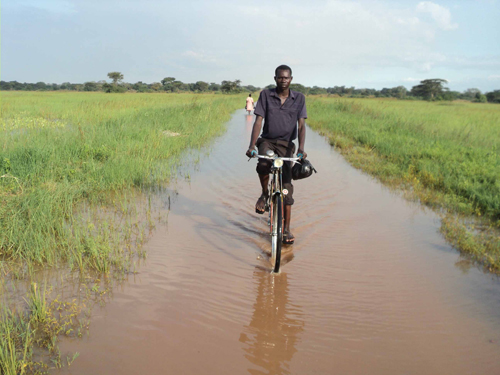 Evelyn Apolot pensively stares at nothing but a bleak future. Her wrinkled face is a clear testimony of years of toiling to fend for her growing family. Sadly, most of the property she had worked hard for many years to obtain was destroyed in a single night. Her tiny mud-and-wattle grass-thatched hut was first submerged and then razed to the ground by floods triggered by heavy downpour last November.

Memories of that devastation are still fresh in her mind. “I lost a lot of property in the floods,” she says, adding: “We used to experience small-scale floods, but this time water destroyed everything — my house and crops.”

A resident of Owiny-Agule village in Serere district, Apolot appears to have resigned to fate. Left with no place to call home, local leaders helped the single mother of seven to find refuge in the Owiny-Agule community hall, where she still lives together with 10 other vulnerable families also displaced by floods. In her garden, waterlogging destroyed her crops. The stench of rotten tubers from her garden is a grim reminder of the loss she suffered. Apolot says she does not know what she “did to deserve this” — the experience of floods or prolonged dry spells.

If the crops had not been destroyed in the garden, Apolot could have relied on the season’s harvest to raise money to build another house. Unfortunately, she only expects little from this season’s harvest. So, she has to stay put at the community hall. Here, she can hardly afford a decent meal. She is in such dire straits that four of her school-going children have since dropped out of school.

Apolot’s dilemma is a representation of the broader picture panning out in a district devastated by abrupt climatic changes. John Okiror Omagira, the LC I vice chairperson of Owiny-Agule village, explains that floods have made life here ‘hell’.

“Life is difficult,” he explains, fanning himself under a tree shade in his ravaged cassava garden. “Two people, including a four-year-old toddler, were killed by floods in Owiny-Agule village alone, while more than 100 houses were destroyed.”

According to Okiror, many local people are caught between a rock (devastating floods) and hard place (government’s failure to address their plight). A report released by the Uganda Red Cross Society (URCS) in November noted that in Serere district alone, 11,809 households were affected by floods in the sub-counties of Pingire, Kaseta, and Kabunguru, among others.

Ken Kiggundu, URCS’ director for disaster management, noted in the report that floods also washed away homes and destroyed crops in the several other districts, including Katakwi, Kumi, Bulambuli and Butaleja.

“From floods, I fear we are headed for famine. Our food crops were destroyed in the garden and we have lost hope,” he says.

Stagnant water has left many people at risk of contracting waterborne diseases such as cholera, malaria dysentery and diarrhoea. Serere health centre IV, the biggest health facility in the district, is already struggling to cope with new incidences of diseases. Incidences of malaria have shot up due to stagnant water, providing a breeding ground for mosquitoes. 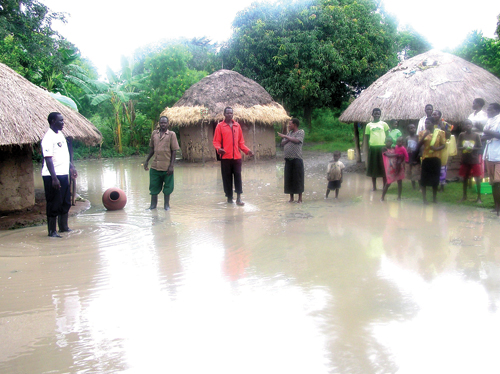 “Malaria cases have more than doubled due to floods. We expect the situation to peak in the coming months,” says Oluka Onyango, the Serere health sub-district in-charge.

The extreme weather events have recently ravaged several communities in Uganda. But the question on everybody’s lips is: what is actually causing all this? Scientists have blamed the change in weather patterns on people’s irresponsible actions over the years. A report on climate change and extreme weather by the UN’s Intergovernmental Panel on Climate Change (IPCC) linked floods and drought to human activities such as deforestation.

“There is strong evidence that the warming of the Earth over the last half-century has been caused largely by human activity, such as the burning of fossil fuels and changes in land use, including agriculture and deforestation,” says the recently released report.

It adds that these activities are responsible for the emission of greenhouse gases, which in turn cause the planet to be warmer. A rise in temperatures, scientists believe, has been responsible for more erratic and intense rainfall events, triggering floods in many parts of the world. According Onyango, the rains are heavier and more erratic, affecting agricultural production while the dry seasons are setting in much earlier than usual.

“Extreme weather events continue to be more frequent and intense, not only devastating lives, but also infrastructure and institutions,” he adds.

Julius Oluka, the Serere district vice chairperson, says floods have affected safe water sources such as springs, wells and boreholes, which has left residents in search of safe water. Sadly, the UN climate report predicted more floods and droughts, especially in Africa, raising the spectre of famine in regions where daily life is already a hand-to-mouth experience for millions.

Uganda is highly vulnerable to climate variability, since the economy and the well-being of the people are tightly bound to climate. Human-induced climate change in the coming century has the potential to halt or reverse the country’s development trajectory, the report noted. In particular, climate change is likely to mean increased food insecurity; shifts in the spread of diseases like malaria; soil erosion and land degradation; flood damage to infrastructure and settlements; and shifts in the productivity of agriculture and natural resources.

Little wonder, the hard-hit communities are demanding urgent government action to insulate them from the adverse effects of climate change shocks.

More important, government is obliged to enact policies that can increase resilience to climate shocks. There is need for tougher steps to cut greenhouse gas emissions that scientists says are heating up the planet and triggering more extreme weather. If no urgent action is taken, climate change threatens to reverse Uganda’s hard-won development gains and jeopardize its economic development making the poor even poorer. 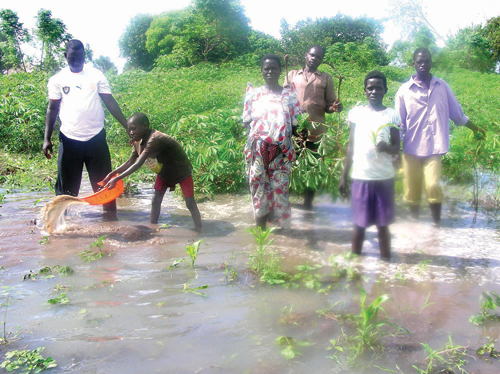 There is need for a guiding policy to address climate change at all levels and by all players. David Obong, the permanent secretary in the ministry of Water and Environment, says the country is already crafting a climate change policy and the current climate unit in the ministry will soon be developed into a fully fledged department.

This article was sourced with the help of Panos Eastern Africa.