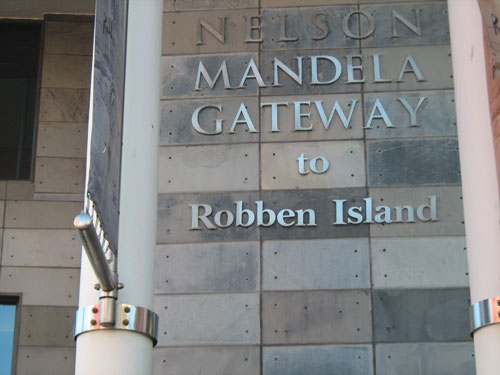 On Friday December 16, 2011, I finally got the much longed-for opportunity for a pilgrimage to South Africa's Robben Island, once apartheid's infamous fortress of incarceration.

Today, Robben island is a UNESCO world heritage site lying 12 miles off the harbour of Cape Town. Between 1962 and the end of apartheid in 1990, this prison incarcerated thousands of South African political prisoners.

Much earlier, it had been a place for outcasts, a leprosy colony. Robben island is  much associated with Nelson Mandela and the struggle for freedom in South Africa.

My journey that morning was aboard the ferry Susan Kruger, the same that in times past carried political prisoners to their damnation, starting from the Nelson Mandela Gateway to Robben island at the Cape Town harbour.

At Robben island, our guide that day was the legendary freedom fighter and former inmate here, Thulane Mabaso, who served six of his 18 years of imprisonment here between 1980-86.

Mabaso reminisces sharing time here with Nelson Mandela, for whom he has great respect, admiration, and love.

With apt humour he directs us to follow him, declaring jokingly: "You are now my prisoners".

Mabaso guides us to the reception point, and walks us past the sick bay, explaining the subjection of prisoners to much humiliating medical and body checks, after which they were chaperoned, in chains of course, to the prison, as the jailers mocked them and assured them that they would not leave the place alive anyway!

Mabaso's guided tour involves narration of his own ordeals as well, particularly the story of the visit by his father that never came to pass.

When his father was granted permission to visit his son, on the appointed Saturday, as Mabaso waited with much enthusiasm, instead he was told by the prison authorities that his father could not visit him after all.

He had been shot eight times. At this point Mabaso's voice quavers and falters, drawing tears from some of us in the crowd. Narrating how he returned to his prison cell literally trembling and crushed, Mabaso tells how causing harm to the families of the prisoners was typical punishment meted on the prisoners to crush their spirits.

On the afternoon of December 16, after serving as our guide, Mabaso told us he was slated for a get-together with his former jailer, in the spirit of national reconciliation.

This was one of the failures of calculation by South Africa's Nationalist Party and its apartheid policy, for they had not anticipated that on Robben island, political prisoners would befriend and humanize their jailers, but also form a government in waiting.

In this regard Mabaso glowingly reminds us of Nelson Mandela's speech at the inauguration as South African President in May 1994, namely, how as a result, South Africa would be governed by former prisoners, still true today with the presidency of Jacob Zuma, also once a prisoner at Robben island.

Even then, the reconciliation does not blur the fact that for Mabaso, at the South Africa's Truth and Reconciliation hearings, the same people who reduced his father to the wheelchair with bullets were not only granted blanket amnesty, but are also today some of the wealthiest men in the land, while he and his comrades are saddled with near-inconsequentiality. 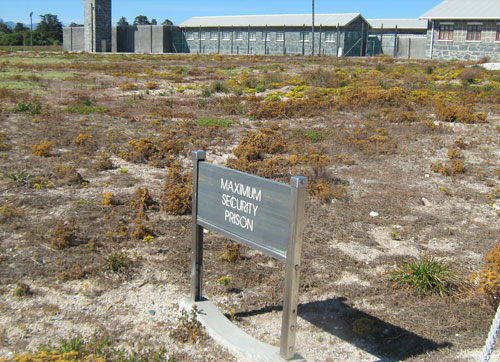 Robben island's holiest shrine is, of course, the cell of prisoner 466/64, Nelson Mandela, which, unlike other cells, is locked and its inside inaccessible to visitors.

And in this regard, Mabaso's story would be far from complete without the mention of Hellen Suzman, Mac Maharaj, and Ahmed Kathrada.

For one, it was Suzman, the white woman member of parliament in the heady days of apartheid, who spiritedly called the world's attention to the plight of the political prisoners in South Africa, and whom Nelson Mandela refers to in Long Walk to Freedom as the only woman to ever have graced their prison cells.

Mabaso further cherishes the memories of  Kathrada for crafting and preserving Mandela's autobiography on Robben island, and Maharaj for smuggling it to London, and on arrival there writing to Mandela in jail how "the ship had landed safely", a coded reference to the fate of the Long Walk to Freedom.

In the end, I scramble to shake hands with Mabaso, and, boarding another ferry, the Diaz, I return to Cape Town reminded of T.S. Eliot's  poem 'journey of the Magi': "We returned to our places, these Kingdoms, But no longer at ease, in the old dispensation".