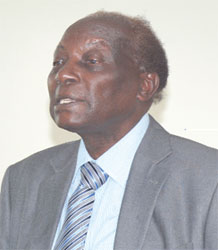 Days after the Prof George Kanyeihamba-led commission of inquiry report was released, a key suspect feels like a winner.

Exuding confidence, Moses Mapesa, the former Executive Director of Uganda Wildlife Authority (UWA), says there is no incriminating evidence in the report pinning him over allegations of misappropriation of funds meant for the Protected Areas Management and Sustainable Use (PAMSU) project.

“Other than general statements, I am yet to see anybody pinning me with credible evidence,” Mapesa told The Observer.

Although the commission confirms that a sum of $27m from International Development Association (IDA), $8m from Global Environment Facility Trust Fund (GEF) and $2m from government was provided for the entire project for the four components - UWA, Uganda Wildlife Education Centre (UWEC), Ministry of Tourism, Trade and Industry (MTTI) and Department of Antiquities and Museums (DAM) - the report doesn’t bring out how much money was embezzled and by who.

For example, while the report recommends that Mapesa be investigated for embezzlement and conflict of interest, it does not say how much money he embezzled.

The report only comes out on one count where $90,000 was budgeted for 15 solar panels, but only three were delivered - recommending that Mapesa be held responsible as an accounting officer. However, Mapesa says that such work belonged to the procurement department on whom he depended.

He, however, explained that the prices for the solar equipment could have gone up as the project took off six years later in 2002. Mapesa is also faulted for conflict of interest; his health centre in Busia was one of the beneficiaries from International Health Network (IHN), which won the tender to provide health services to UWA staff, their spouses and four biological children.

Mapesa says the board approved this money. He tasked the commission to seek clarity from the IHN medical provider on how many people were treated. The other count were Mapesa is faulted is outside the PAMSU project. The commission accused Mapesa of being part of the Rhino Fund board, which presented a conflict of interest.

But Mapesa argues that he was a board member by virtue of being UWA’s Executive Director.

“Any UWA boss at that time would have been on the board because this was a government project of re-introducing rhinos,” Mapesa says.

The only evidence on mismanagement of money that the report avails is the unaccounted-for project money by the ministry of Tourism, Trade and Industry (MTTI).

The commission established that Shs 2.19bn meant for the project was diverted by the ministry. It further established that a total of Shs 6.97bn was released by the ministry of Finance to MTTI in installments of Shs 3.484bn and Shs 3.486bn in 2009/2010 as PAMSU tax arrears refund to UWA for forwarding to tax collector URA. But the money was never even forwarded to UWA.

Yet the ministry of Finance provided printouts of this money.

“This money was diverted by the accounting officer/permanent secretary, Ambassador [Julius] Onen and partly spent in MTTI… only he knows the nature and purpose of why he diverted UWA money to them,” the report reads.

Further, the commission received evidence of MTTI officials, specifically ministers Maj Gen Otafiire and Serapio Rukundo, Ambassador Onen, Undersecretary Emmanuel Olaunah and Otafiire’s Personal Assistant Edna Nandudu receiving money from UWA to facilitate their travels, which the commission concludes was illegal since the ministry has its budget for travel.

However, Maj Gen Otafiire was exonerated. In addition, all the ministers - Daudi Migereko, Janat Mukwaya, Otafiire, Serapio Rukundo and Jovina Akaki - who served at some stage during the PAMSU project were exonerated apart from Prof Edward Rugumayo.

Prof Ephraim Kamuntu who assumed office recently is, however, to be investigated for economic crimes and breaches of the leadership code and misconduct.

Kamuntu terminated the work of the commission following the end of their tenure on August 31, although the commission demanded for more time to find its work. The commission was set up by Maj Gen Otafiire on March 20.