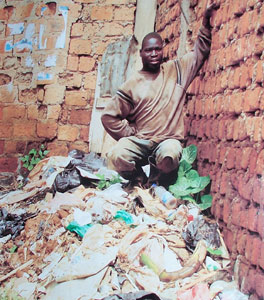 On the rooftop of a building next to Braedt Hostel in Katanga, a slum in Wandegeya, a group of kids were running about while their parents looked on.

Kids from Katanga enjoying a day out. Not often do they get a chance to stand atop a storied building.

That aside, not often do they get generous people, who decide to throw them a small tea/soda party and use their work earnings to provide a better livelihood for them.

On August 20, a group of ten photographers exhibited photos of what takes place in Katanga, courtesy of Bayimba Cultural Festival. The proceeds from the photo sell will go to families in Katanga.

Katanga is a slum overlooked by the Ivory Tower of Makerere University, and a number of university students’ hostels have been built there.

But the lofty standards set by the many university students and the burgeoning businesses do not seem to have rubbed off the residents of Katanga. Its dwellers live in a sorry state with poor sewer systems, rubbish, filth and when it rains, the area is bound to flood. Veronicah Akankunda was one of the proponents of this project.

She focused on Sula, who collects rubbish around Katanga and in a day, he earns Shs 2,000, less than a dollar. Katanga itself is a dumping site for many and few residents are ready to pay Sula for collecting rubbish around their homes.

Yet the Katanga residents that attended the photo exhibition looked healthy, sipping away on the coffee, tea and sodas and munching the biscuits that were served.
However, it is not only the bad in Katanga that was photographed.

Paul Lumala photographed a man whose business in Katanga is to fetch water from a well and selling it to the food vendors and homes in Wandegeya that cannot access tap water. Using a bicycle that he has owned since 1993, this man fetches about forty 20-litre jerry cans every day.

Other women in Katanga sell banana peels to livestock farmers. The photo exhibition is quite touching, and it is expected to go on for a month even at the National Theatre. Each photo goes for at least Shs 100,000, the kind of money the photographers feel can help a family in Katanga start a small business.