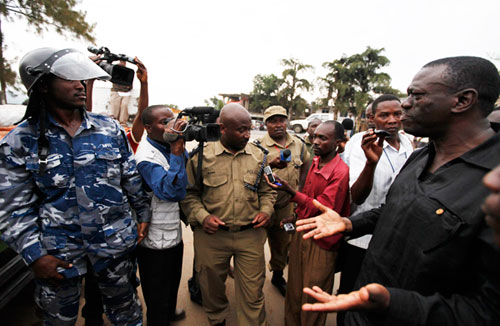 As ‘walk to work’ is re-launched in Masaka

Riot police, who had been deployed in their hundreds, used teargas, as well as live ammunition and rubber bullets, to disperse crowds escorting Besigye to a monument erected for one of the victims of the April-May ‘walk to work’ campaign. Supporters ran helter-skelter as the police charged at them. At Nyendo, near Masaka town, they attempted to form a human shield around Besigye

Upon being blocked, Besigye who had been walking, now decided to drive towards Kampala. His vehicle was escorted by about eight police trucks, a mamba and a water cannon truck to ensure that he does not return to the town where he had earlier held a rally.

But the keys of one of his support vehicles, a white van that had branched off to a Total petrol station, were reportedly confiscated by security officers, triggering a standoff.

By the time we went to press, the FDC leader was still at the petrol station, awaiting any eventualities. Earlier in the day, police had tried to block Kasana playground, the venue of the rally organised by Action for Change (A4C), and fought running battles with opposition supporters who forced their way in and held a rally there.

However, police succeeded in preventing opposition supporters led by the FDC president from accessing the Kitaka-Nyendo home of Aloysius Walusimbi, father of two-year-old Juliana Nalwanga, who was shot and killed during ‘walk to work’ protests on April 21 this year. Police also impounded several T-shirts with inscriptions, ‘Freedom, Walk-To-Work’.

The opposition had said they wanted to hold a memorial service at the home, an event police declared illegal. Mathias Mpuuga, coordinator of A4C, the pressure group that organised the protests, said the candlelight memorial service in honour of all those who were brutally killed during the April-May ‘walk to work’ demonstrations would be rolled out in other parts of the country where civilians were killed by security forces during the protests.

The candlelight memorial was intended to start in Nyendo, Masaka. However, police camped at the home of Walusimbi, baby Nalwanga’s bereaved father, to block the A4C leaders from accessing it. On Thursday last week, police officers visited the home and persuaded Walusimbi not to host the opposition leaders.

During a meeting with Judith Nabakooba, the police spokesperson, the family expressed ignorance about the planned event in memory of their late daughter. Another senior police officer, Andrew Sorowen, told a press conference on Wednesday morning that the opposition would not be allowed to address a rally at Nyendo central market square as planned because it would disrupt other people’s activities.

But Mpuuga, who is also Masaka municipality MP, said the opposition would go ahead with the rally at the Kasana playground. In April and May, the country was rocked by protests against the rising cost of living. At least 10 people were killed and many others injured, while hundreds were arrested, including senior opposition figures, as police battled the protesters.

Although the earlier protests ended rather unceremoniously, especially following the brutal arrest of Dr Besigye, the most prominent participant, there was agreement that the ‘walk to work’ campaign was successful, as it put government on the defensive and dominated local and international media for many weeks.

Because of this perceived success, opposition leaders have been talking of resuming the action, which they tried to do in Masaka yesterday. As expected, they were met with heavy police and military deployment. All roads leading to Nyendo market square, the first proposed venue for the rally, and all roads leading to Walusimbi’s home, were barricaded by police.

The police also mounted numerous roadblocks and conducted thorough checks on both motorists and pedestrians. Dr Besigye arrived in Masaka town amid heavy security. Sam Mugumya, his aide, told The Observer that heavily armed police officers driving in their patrol vehicles trailed Besigye all the way from Kasangati, his Kampala home, to Masaka town.

Riot police then besieged Mariaflo Hotel, where Besigye held a closed-door meeting with FDC leaders in Masaka. Mpuuga told The Observer, that the venue for the rally was changed from Nyendo central market square to Kasana playground after a meeting with security officials. 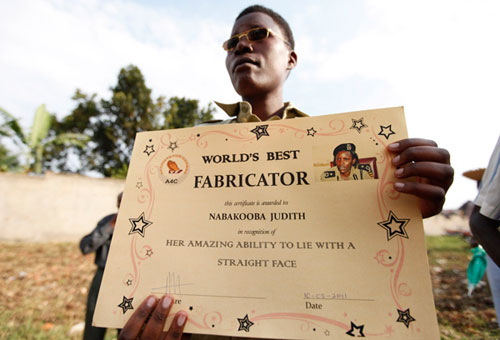 Gilbert Bwana Arinaitwe, the police officer who brutally arrested Besigye and sprayed him with pepper, was recognised for his outstanding torture methods.