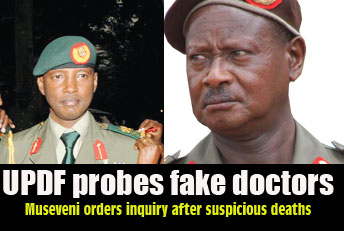 President Museveni has ordered an inquiry into quack doctors who appear to have infiltrated the army, especially the African Union Mission in Somalia (AMISOM), The Observer has learnt.

According to a military source, Museveni is concerned about the possible existence of ‘doctors’ with forged academic qualifications, whom the President fears could be working in sensitive operational areas and thus endangering officers and men of the UPDF.

According to our source, suspicion grew after some of the soldiers who were injured in a recent Al Shabaab attack in Mogadishu appeared to have received incompetent medical care, leading to a deterioration in their condition.

The President sought answers after this incident and was told by his military intelligence about the likelihood that some army doctors could be unqualified.

The UPDF has always actively encouraged fresh graduates of medicine to join the army, and when they do, they are lavished with the rank of captain upon completion of training. This might be incentive enough for unscrupulous young men and women to forge academic papers.

Stung by this possibility, Museveni ordered an inquiry to be headed by none other than the Chief of Defence Forces, Gen Aronda Nyakairima himself. The Aronda-led probe team is charged with investigating the possible existence of quack medical personnel in the Chieftaincy of Medical Services [CMS].

The President and commander in chief wants the probe to start with AMISOM, our source in the chieftaincy of military intelligence said. Other members of the six-man team are: Maj Katinda (secretary), Lt Col Dr Ocen, Lt Col Takirwa, Maj Kyomugisha and Maj Karaka.

The chief of medical services, Brig James Makumbi, and his deputy, together with all senior and junior staff, have been directed to cooperate with the committee which must report its findings in two weeks.

Lt Col Felix Kulayigye, the army/Defence spokesman, confirmed being aware of instructions to this effect, but said he was unaware of what could have sparked off the investigation.

“You know matters regarding academic papers have been around the country for a long time, but when it comes to the medical field, you don’t take chances,” he said.

But our CMI source believes that the recent death of about half a dozen soldiers from injuries sustained in the Mogadishu attack led to this inquiry. There is also fear that wrong elements could take advantage of laxity in the UPDF’s chieftaincy of medical services and undermine the army from within, another source added.

Early last month, Ugandan soldiers serving in Somalia came under attack during operations against insurgents who still control as much as 50% of Mogadishu, notwithstanding recent gains.

Uganda has an estimated 5,000 soldiers stationed in Somalia, while Burundi has about 3,000. The troops, under the auspices of the African Union, are charged with protecting Sheikh Ahmed Sherif Sheikh’s Transition Federal Government (TGF).

In 2003, Museveni ordered for a commission of inquiry into the existence of ghost soldiers on the UPDF payroll. The inquiry discovered a lot of ‘ghosts’ and led to many officers losing their positions.