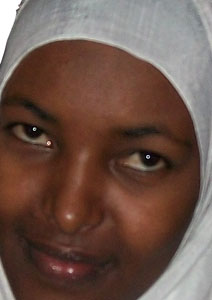 Jelle Isinina, 22, is the new guild president at the Islamic University in Uganda (Kabojja campus).

Because she is a Somali-Kenyan, Isinina was worried that Ugandan students, who constitute the majority of the student body, would not vote a foreign student as guild president.

“There has always been a stereotype of international students being proud. I want to change that as the new guild-elect,” she explains.

Isinina is now planning to make her presidency the golden age of the Kabojja campus that will attract many female students. While she has been in all-girls’ schools all her life, Isinina is aware of the fact that in the real world, men and women compete daily.

She, therefore, hopes to empower fellow students with confidence, through interactions with other universities and, particularly, with male students so that they realise they have other competitors. From a family of five, Isinina has been a leader throughout her school years.

And because this family had more boys than girls, Isinina understands all too well how timid girls can be in the face of boys. She explains that her Somali culture puts women second to men, something she wants to change when she becomes a parliamentarian in future; either in Uganda or Kenya.

“In our culture, women are inferior and are perceived to be under men. I want to be their representative at all levels.”

The daughter of Jelle Abdille and Rukya Muhammed of Nairobi, Isinina attended Nairobi primary school before joining Busia Secondary School for S.1 and S.2; where she was a health prefect. She then moved to Uganda for S.3 and S.4 at Our Lady of Mercy Girls.

For A-level, she went to Parvatiben Muljibhai Madhvani Girls School. Isinina is now pursuing a Bachelor’s degree in Mass Communication. Before contesting the guild presidency, Isinina was a senior chairperson of the students’ disciplinary committee, a position that inspired her to run for the highest office.

On a broader scale, since she is a communication student, she hopes to improve the public’s perception of her university.

“As a communicator, I want to be the public relations officer of my campus so that the name of the university is perceived in a better way.

“People have a different view of the female schools and institutions but I am here to prove them wrong,” she says.

Isinina’s vision for the future is so clear that she already has plans of being a women rights activist before she joins the august house.

The guild presidency is the start of a great journey.