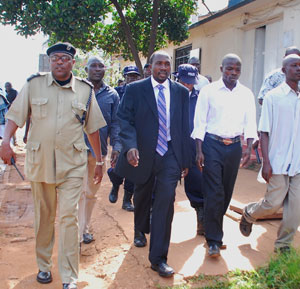 A Foundation for Human Rights Initiative report has dubbed the freedoms of expression and assembly among the most threatened rights in the country.

The report, titled: The Long Road to Realizing Labour Rights in Uganda, while focusing mostly on the rights of workers in Uganda, also studies the trend of other rights, particularly economic and social rights.

Economic rights have come to the forefront of the human rights discourse in light of the rising cost of living globally. In turn, the World Bank has called upon governments to take steps to help the poor who spend a large percentage of their incomes on food.

Ugandans, mostly members of the opposition, responded to the escalating and unchecked prices through what they called the ‘Walk to Work’ campaign.

Participants and orchestrators of the campaign, echoing the World Bank recommendations, called upon government to take steps to check the rising costs of living. The government, on the other hand, insists that the high prices are a global phenomenon whose effects they cannot do much to mitigate.

The ‘Walk to Work’ campaign hinges on Article 29 (1) (d) of the 1995 Constitution, which provides that: “Every person shall have the right to freedom to assemble and to demonstrate together with others peacefully and unarmed and to petition.”

The article also guarantees the right to freedom of speech and expression, including freedom of the press and other media and freedom of association (which includes freedom to join civil and political organizations). Further, under Article 29 (2) (a), the right to “move freely throughout Uganda” is guaranteed.

FDC president Dr Kizza Besigye has pointed out that in fact, many Ugandans walk to work every day because they cannot afford the prohibitive public transport costs. The cost of public transport has almost doubled since the beginning of 2011, and remains unregulated.

Thus, Besigye argued, all Ugandans deciding to walk to work for two days a week would be a way to commiserate with those who walk daily, and to demand for an improvement in citizens’ general living conditions.

The Constitutional Court, in the 2008 Muwanga Kivumbi versus Attorney General Case, further upheld the right to freedom of association and assembly by declaring unconstitutional Article 32(2) of the Police Act that gave the Inspector General of Police power to prohibit the convening of an assembly if he/she believes it is likely to cause a breach of the peace.

However, like Livingstone Ssewanyana, executive director of Foundation for Human Rights Initiative, observes, the police have continued to act as though they are unaware of the ruling. Ideally, the ruling would mean that Ugandans have the natural and inalienable right to assemble, and there is no need to get permission from the police.

However, the Constitutional Court maintained the requirement to  inform the police that they would be assembling as provided for under S. 32 (1) of the Act. Ssewanyana explains that the police are only expected to intervene when someone acts unlawfully or in violation of other people’s rights.

Following the decision, some legal scholars argued that letting the provision on notification stay in the statute books left the police with considerable power to interfere with freedom of expression and assembly.

Indeed, the notification requirement is the major point of contention, with Inspector General of Police, Maj Gen Kale Kayihura, insisting the walks are illegal and are not merely “innocent walks”.
Apart from absence of notification, the police also claims they know of opposition plans to destabilize the country and breed violence.

President Yoweri Museveni has added his voice, saying those involved in the protests are committing treason. The cornerstone of these arguments is Article 212 of the Constitution, which lays down the duty of the police as including protection of life and property, preservation of law and order, and preventing and protecting crime.

Dispelling potentially dangerous protesters, they argue, is part of this duty. Thus, the police maintain that while protesters do not have to seek permission, they must inform them of their plans, so that the police can provide the necessary protection.

Citing lack of notification, the police was featured in the media clamping down protests with what the FHRI report calls “unnecessary force.” The police raided and sprayed tear gas directly into people’s houses, harassed and arrested bystanders, insisting that it is “unlawful to walk”.

The hundreds of people arrested, including opposition MPs, were then charged with offences like disobeying lawful orders and inciting violence.

Ssewanyana opines that the physical violence meted out by the police is a form of torture and inhuman degrading treatment, yet freedom from torture is a non-derogable right under the Constitution.
He observes that: “They (police) act like Article 32(2) has not been outlawed.”

Ken Lukyamuzi, Lubaga South MP-elect, emphasizes that the Constitution’s Article 212 requires the police to cooperate with, rather than oppress, civilians as they carry out their roles. The rights of these civilians can thus only be limited to levels acceptable in a free and fair society, and after following proper procedures laid down by law.

The public, the majority of who do not understand complicated socio-legal arguments, is left with more questions than answers, and the reality of biting hunger and poverty.

Who, between the police and the human rights campaigners, should they believe? Most people are inclined to follow the police orders that are reinforced by the presence of heavy deployment all over the city.

The FHRI report also notes that in offing is the September 2010 Public Order Management Bill, which, if passed, would simply be a reenactment of S. 32 (2) of the Police Act.