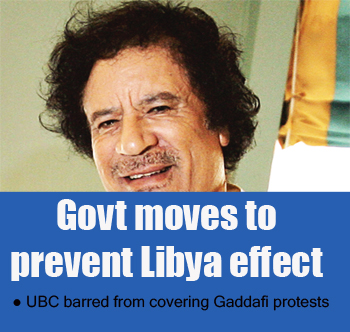 The state-owned public broadcaster, Uganda Broadcasting Corporation (UBC), has been barred from airing any coverage of the ongoing public protests in Libya and a number of other North African and Maghreb countries, The Observer can exclusively report.

Protests in this oil-rich desert country, with longstanding relations with Uganda, broke out on February 14, but gained momentum on February 17 after the government’s brutal intervention, in which hundreds of people were killed.

The gag order, according to impeccable sources within UBC, came down from the corporation’s managing director, Edward Musinguzi Mugasa, sometime in the afternoon of Sunday, February 20, as the Electoral Commission prepared to announce the official results of the presidential elections.

The explanation accompanying the order, our sources say, was that news stories, and most particularly video footage, from these countries could incite riots in Uganda.

Mugasa could not be reached for comment, but the corporation’s spokeswoman, Jane Kasumba, denied knowledge of any such directive.

“That is not true. UBC airs all the stories that are necessary and that we can,” she told The Observer on phone on Tuesday.

Kasumba explained that with the elections season, they had changed the focus and way of reporting their stories to give more prominence to Ugandan human interest stories, leaving most international news to be carried by channel France 24, usually after midnight.

Informed about the fact that since the order was released on Sunday the station has not carried any stories on protests in Libya, which is currently the top news item all over the world, she insisted that this was not true.

The Observer, however, has it on good authority from people in charge of lining up the news at UBC that there has been no story carried from North Africa since Sunday.

The order, our sources say, was verbal and passed on to the editors and anchors who were slated to work that evening and who, in turn, were supposed to pass it on to whichever shift would replace them.

As such, there has been renewed shock and surprise as every other news team has had the order literally cast at them by their peers, either some moments before the start of, or during their shifts.

In each of these cases, editors, and particularly anchors, have responded with indignation. In an informal meeting in the newsroom on Tuesday, tempers flared among reporters and news anchors, many of whom expressed feelings that the directive did not make sense.

“How credible does this leave us as UBC? This leaves us exposed; naked in our underpants and socks. You don’t feel proud of where you are or what you are doing,” said a clearly perturbed editorial staffer The Observer spoke to on phone.

“If they are gagging us, how then do they say our news is lousy? How do they expect us to compete with other stations?”

Another evidently infuriated editorial staffer added: “It’s a sensitive topic because our chief news editor has been fired. Our bosses, the editors, are following orders. Nobody wants to lose their job.”

This fear of losing one’s job was palpable in another staffer The Observer spoke to.

“As a journalist, if they give you limitations on how you can write your story, naturally you would want to challenge, but then you still need your job.”

The editorial department is scheduled to meet with the MD and management on Wednesday, during which meeting an official communication is expected.
“We want management to be clear that this is where you can go; this is how far you can reach,” said one of the news anchors.

Meanwhile, the chief news editor, Andrew Mugyema and the TV manager, Charles Musana, were summarily fired on Tuesday morning under unclear circumstances, an action that paralysed the editorial department.

“We are all in shock because we think he (Mugyema) did the best he could, but UBC management is just [confused],” said one editorial staffer.

While Mugyema could not be reached, Musana told The Observer that he was not given any specific reason why he had been relieved of his duties. Mugyema had been hired expressly from NTV to help turn around UBC’s newsroom, yet his role put him in constant altercations with the managing director, sources at the station say.

The Observer has also learnt that a few days into the campaign, the managing director issued instructions to the editorial department, asking them not to cover opposition presidential candidates, especially those perceived to pose a real threat to President Museveni, particularly Dr Kizza Besigye, Norbert Mao and Olara Otunnu.

This was contrary to the constitutional obligation that mandates UBC to give equal airtime to all candidates. In fact, in one instance, the managing director is reported to have turned away an advertisement for Besigye paid for by the Inter-Party Cooperation.

Mugasa reportedly said that it would cost him a lot if he aired it. He ordered the advert returned and the money refunded.

When the European Union Election Observation team arrived in the country about two weeks ago, our sources say, this is one of the issues they raised with both the ministry of Information and National Guidance and the Electoral Commission. Information minister, Kabakumba Matsiko, is reported to have written to UBC, inquiring why this was the case.

The station promptly resumed coverage of all aspirants in the final week of the campaigns. It is not surprising, then, that in the EU observers’ preliminary statement released on February 20, UBC has been heavily criticised for blatantly failing its constitutional obligation as a public broadcaster to treat each presidential candidate equally.

Kasumba said she could not comment on this because she had not read the report yet. Nonetheless, the firing of Mugyema and Musana, is largely seen by a number of their colleagues to whom The Observer spoke, as merely sacrificial.