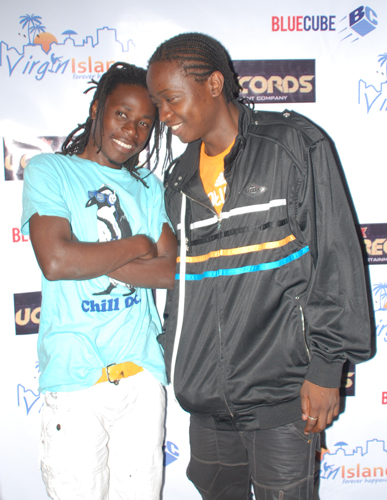 In one of his songs, Uganda’s popular local artiste Ronald Mayinja sings that “one can easily end in a company top seat even when they were employed as cleaners.”

Cidy, who joined Leone Island as a costume designer in 2009, is now the vice president of the company. And after three years, Papa Cidy will launch his Meeme Katale album at Whispers club in Kanyanya.

“When I joined Leone, I used to design attires for the queen dancers; I would also design for artistes at big shows. That was my passion, it was my profession,” he says.

But there was something more than tailoring in this young man – and he knew it. “I was also interested in music; I had earlier written and recorded a single called Tolina Kisa.”

When the Leone Island boss, Jose Chameleone, listened to the vocals, he realized that there was a wasted talent in the young man from Bulemeezi.
In that same year, the two redid the hit which turned out to be Papa Cidy’s big break.

“This boy has special talent, he has an exceptional voice,” Chameleone exclaimed. Since then, the two have released other duets such as Joselina and Daniella.

Yet, unlike other artistes, Papa Cidy confesses that his childhood passion was never music.

“I always loved designing Indian attires and I wanted to be a tailor. But as God’s plans are, I have ended up in music.

“But I always say that learning tailoring is like learning how to ride a bicycle, even when I retire in  music, I will still be in position to do tailoring.”

Apart from his collaborations with Chameleone, Papa has released such singles as Your Name, Ba Mugumu, Tupepeya Nowange, Nsiimye Gwe, and Meeme Katale- which he is launching today.

In addition to his family condemning his new vocation, Papa has also found it hard to promote his music.

“It is the biggest challenge, people should either know you or give them money if they are to play/promote your music,” he says.

“On the other hand, if someone doesn’t like your music, they will never play it.”

I think beefing is becoming one of the strategies of surviving in the music industry; it is a necessary evil. There is a lot of competition which calls for creativity and innovation.

I look at beefing as a way through which some artistes try to stay on the scene and surprisingly, Ugandans get caught up in the mix and play a big role in this hate game.

Personally, I condemn beefing because the industry needs harmony and working together for the greater good.

Love cuts across all genres; it is part of our lives. I chose Papa Cidy as my stage name just for people to easily identify me.

Life away from music

If I’m not doing music, it is movies that take my time. Recently I was watching The Mask – I love action- packed movies with some fiction.

I want to be a top artiste in Uganda. I look up to Chemeleone and I owe him everything. I can only leave Leone Island to start my own empire.