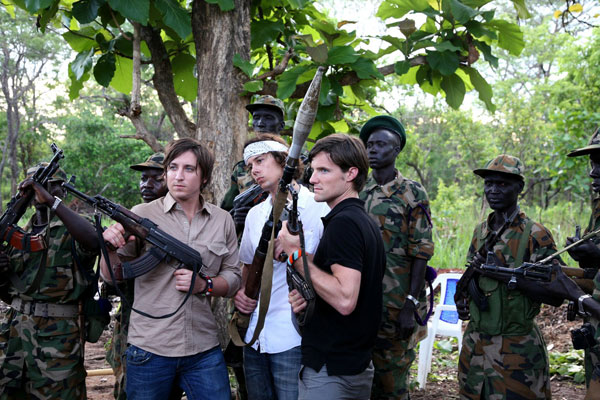 A well-choreographed piece of viral marketing has landed American charity Invisible Children in the meat grinder.

Invisible Children must have thought it was in luck when the brushwork it put on a 29-minute documentary about the erstwhile war that raged on in the Acholi and Lango sub-regions gleaned an eye-popping 26 million and counting hits on various social media in just a few days.

It looked like an incredible public relations coup for the San-Diego headquartered charity. Joseph Kony, the elusive head of Lord's Resistance Army (LRA), was awkwardly being put under the glare of the spotlight as Invisible Children's Kony2012 documentary implored. The #stopkony hashtag was trending in all ports of call one can care to imagine.

But then something happened. Invisible Children's balloon was pricked. Millions of impressionable people worldwide might have been unsuspecting, but there were a few who strongly reckoned that Kony2012 was a balloon full of hot air.

A filming adventure they commenced in the spring of 2003 ended up with three of the charity's founders (Joseph, Laren and Bobby) stumbling "upon Africa's longest-running war" - the LRA war in war-torn northern Uganda. Deeply touched by the conflict that drew vulnerable groups like women and children, Joseph, Laren and Bobby were compelled to produce a documentary in 2005 that they aptly called Invisible Children: Rough Cut. The documentary was a hit.

"At first, they [Joseph, Laren and Bobby] showed [the documentary] to their friends and family, but it wasn't long before millions of people had seen [it] and knew about the 'invisible children", states the charity's official website.

The seed had been sown. A year later - in 2006 - a new baby was born. The baby was called Invisible Children. It would, for good measure, be registered as a not-for-profit non-governmental organisation (NGO). This week, Invisible Children rolled out its Kony2012 video. It was, from the looks of it, a better manicured version of Invisible Children: Rough Cut. Whilst it came off as poignant for many, a vociferous minority deemed it as being out of touch. The war in northern Uganda had long ceased. In fact, it technically stopped at round about the time Invisible Children was being registered as a bona fide company.

Ugandans who were sounded out by BBC World Service's renowned World Have Your Say programme said they took exception to the documentary because it draws the spotlight to an area that is now not quite fundamentally important. It is premised in the pre and not post-war period, they opined. Others were not as kind. They reckoned that the documentary is aimed at propping a subtle commercial foray for Invisible Children. If Invisible Children deeply cared as it claims, they reasoned, it could have tried to drum up support for post-war rehabilitation programmes.

The strand that the real invisible children are those who are grappling with the Nodding Disease Syndrome (NDS) has also been accentuated by many Ugandans. The blogosphere should be shedding tears for the NDS-afflicted children as much as they should have done for children who were either conscripted into Kony's ragtag army or mutilated. The other strand about the corporate persona of Invisible Children also appears to have rubbed many Ugandans - at least those in the Acholi and Lango sub-regions - the wrong way.

War-ravaged victims in the sub-regions have perennially lambasted NGOs for literally feeding off their harrowing tales. The nuances from these victims have always been that many NGOs position themselves to make a quick buck. It doesn't make good reading for Invisible Children that Charity Navigator - a non-profit firm that evaluates American charities - doesn't cover its accountability in glory as a two out of four rating attests.

Charity Navigator doesn't think highly of Invisible Children's accountability because it has never had its finances externally audited. Also, internal audits don't quite paint a rosy picture. Last year, for instance, the San Diego-based organisation spent a paltry 32% of its total expenditure (some $8,676,614) on direct services. The organisation's defence for a low Charity Navigator ranking is because it does not have - reads a statement on their official website ñ ìfive independent voting members on our board of directors".

Outside Uganda, a still image of members of Invisible Children getting cosy with armed forces from Uganda and/or South Sudan has raised eyebrows, as many independent reports have accused the Uganda People's Defence Forces and Sudan People's Liberation Army of pillaging both the Acholi and Lango sub-regions.

Yet Charity Navigator's rating and a documentary that bordered on being self-aggrandising doesn't do Invisible Children any favours. It instead leaves the "story tellers" in the meat grinder.