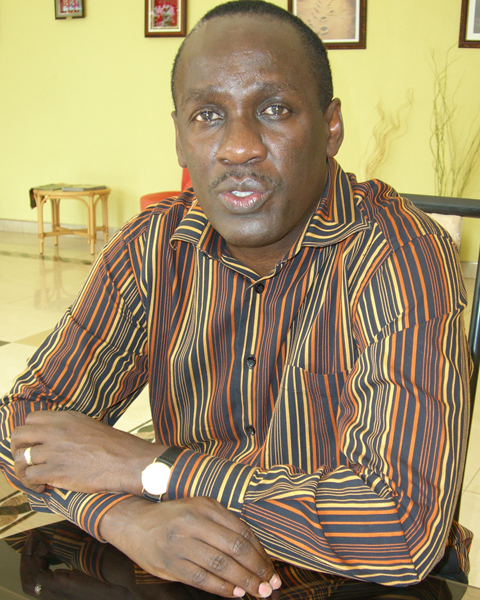 Raila Amollo Odinga, the Prime Minister of Kenya, who could become that country's next president, is very close to our own Capt Mike Mukula, the Soroti municipality MP, and state agents are concerned.

Mukula, one of the vice presidents of the NRM, who says he wants to stand for president in 2016, last year invited Odinga to his election victory party in Soroti town. More recently, Mukula was present and even close to Odinga, during the launch of a new regional university in Kisumu. This function was attended by President Museveni, who was anointed a Luo elder.

State agents in Kampala are at a loss explaining what brings Odinga and Mukula together, we have been told. But the fact that the two men want to be presidents of their respective countries, is not lost on Uganda's intelligence.  Mukula, a former minister who is facing charges related to corruption, got himself in the bad books of the Museveni family after it was revealed through WikiLeaks that he told America's ambassador to Uganda, Jerry Lanier, that Museveni is grooming his son, Col Muhoozi Kainerugaba, to succeed him.

There were reports in the past that Museveni and Odinga were political enemies, but the two leaders appear to have cleared the air after the Kenyan premier appeared at Museveni's campaign rally in 2010 to express his support. In turn, Museveni must have been paying back when he was hosted by Odinga in Kisumu.

During a recent NRM caucus meeting at State House, President Museveni surprised many in his political party by heaping praise on the Public Accounts Committee (PAC), which he said had come up with 'a thorough' report on the Shs 142 billion compensation for Hassan Basajjabalaba. PAC, like all accountability committees of Parliament, is chaired by an opposition MP, in this case Kassiano Wadri (Terego).

It is rare that Museveni finds anything nice to say about an activity remotely associated with the opposition. Nevertheless, Museveni told the lawmakers that unlike those 'unserious' Members of Parliament who presented false documents accusing the Prime Minister, Amama Mbabazi, of taking bribes from oil companies, the PAC report was 'well-researched'.  Wolokoso hopes that Wadri and his team, whose members featured prominently on these pages last Monday, get to know what the President thinks of their work.

Lukyamuzi explains why he is 'poor' MP

Rubaga South lawmaker John Ken Lukyamuzi fondly known as 'Ken the Man', lives a self-effacing lifestyle that is a far cry from that of his colleagues.  While most MPs tend to live flamboyant lifestyles, driving fuel guzzling four-wheel Land Cruisers, Lukyamuzi who has been in Parliament for more than 10 years prefers his battered Toyota Carib. On at least two occasions, Wolokoso has found the MP stranded by the roadside after his vehicle developed a mechanical problem.

Recently, Lukyamuzi confessed to journalists at Speke hotel, that he is one of the poorest MPs. However, he added that his poverty is because much of his otherwise handsome salary is doled out to his beloved Conservative Party, which he leads. However, a rival faction wants him out of the party leadership, which has forced him to rethink his generosity towards the CP.

If you have been wondering where FDC's vociferous woman, Sarah Eperu is, then wonder no more. She was admitted at Mulago hospital where she underwent surgery on her left leg to repair a broken bone. The burly FDC activist, who was discharged last week, sprained her left leg after she slipped and fell along Namugongo-Kireka road some time back.

For over eight months, she has been stuck at her home, unable to move. Eperu was taken to Mulago hospital for specialised surgery and apparently it was successful. When we visited her after the operation, she was in high spirits. She told us that she might be down but she is certainly not out.

"I will be back with a bang," Eperu said.

For now, doctors have advised her to rest, after which she will embark on physiotherapy. Wolokoso wishes her faster recovery.

If there was an award for amiable ministers, it would probably go to Alex Onzima, the minister of state for Local Government. The former FDC man is so humble that you would not imagine he is a minister if you didnít know him. Wolokoso has often found Onzima at the Centenary bank, Corporate branch, on Amber House, and every time his conduct has been amazingly simple. Not only does he patiently join the queue, Onzima also picks up small talk with bank staff and clients he doesn't even know. The people of Maracha must be lucky to have such an approachable representative!

Despite calls to abandon the volatile political demonstrations, the unrelenting Activists for Change (A4C) pressure group is bracing itself for more protests and tougher encounters with the police. After the Katwe skirmishes which left Dr Kizza Besigye and Nabilah Naggayi among others injured, the pressure group has now started moving along with its own ambulance.

We have been told that the ambulance is meant to ferry the injured to the health centres on time in case of any violence. Since April 2011, when the pressure group started its walk-to-work protests, several of its leaders and members have been injured during encounters with riot police. In the past, the injured were always at the mercy of Uganda Red Cross Society, well-wishers or the police, but now A4C wants to take charge of its own injuries. The ambulance was recently at work at the Mulago playground, where the pressure group held a rally.