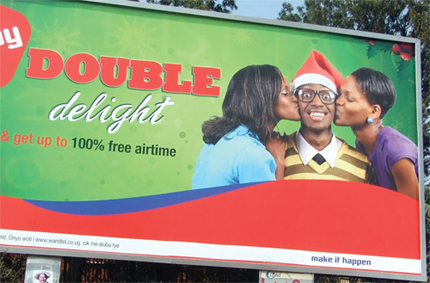 With the Pakalast campaign, Warid telecom Uganda hit gold, winning the 2010 Innovation of the Year Award from the Uganda Communications Commission (UCC).

And why not?  The adverts, original in conception, captured the essence of something infinite, dependable, far reaching and eternal. One of them had a man vowing to stay with his wife, pakalast.

After being served with such uncreative ads, like the Omo ad which presents women as always there to clean up after their men because it is what they are ‘naturally’ meant to do, and they enjoy it, or the MTN mobile money ad that shows an older man dashing off to meet a much younger woman on the bus (who probably does not have any money of her own), suffice to say that the Pakalast ad stood out prominently.

Pakalast also proved that the money could actually come in without robbing a certain class of people (in this case women) of their dignity, and that perhaps people are not so hungry for gender insensitive and sexually humiliating adverts after all.

So, how did Warid slip from beautiful and proactive campaigns like Pakalast to the Shoo boo boo and Double delight? How did commitment to one loving wife turn into putting up with a nagging, irrational and childish woman who demands that her partner honk the horn and the traffic policemen blow the whistle before she could believe that her husband is in a jam?

How did staying with that one partner turn into seeking double delights and getting bonus wives?

It seems that suddenly the creative minds at Warid decided to jump right back into the bandwagon of sexist advertising. These adverts have a common string; they present women as passive members of society who do not have much to contribute beyond their physical beauty, motherly and wifely roles.

They sanction the status quo of male superiority and female subservience.

Thus in the Double delight advert, we see a clear glorification of polygyny as a man, to his immense pleasure, enjoys kisses from two women at once. In the Bonus wife advertisement, we have a wife who does not say a word as her husband is given another wife as his gift for the festive season.

She simply stands by as the wedding guests transform from delighted shock to ululation. And in the Shoo boo boo ad, women are portrayed doing what they are thought to do best - fussing over trivialities and getting in the way of men.

The media has far reaching consequences and greatly shapes the attitudes of society. Thus, Mwilu argues, what the media portrays as normal through advertising, the society shall believe to be normal.

A study by the American Psychology Association backs this argument.  It reveals that it takes only 15 minutes of exposure to video clips that objectify women to make female audience members feel more conscious and depressed about their bodies since they cannot meet the idealised ‘beauty’ marketed as normal.

Another study of magazine adverts in the US from 1960 to 1979, a time when unprecedented numbers of women entered the workforce, found that adverts failed to depict this significant increase in women’s employment outside the home.

This is the same scenario in Uganda today. We have seen women attain exceptional achievements in the academia, business, medicine, media, sciences, the arts and music.

Yet advertisers still stick to that old illusion of what a “good woman” should be. This way, they slowly but surely panel beat women into working towards getting back to what they consider ideal.

The Constitution of Uganda 1995 guarantees the rights of women and their equality to men in all spheres economic, political, social and domestic.

Media owners and practitioners are also bound by their Code of Ethics not to disseminate any disparaging material or promote tribalism, racism, sexism or any other ism.  Such noble provisions, however, remain on paper and Uganda continues to be a free market economy where advertisers can dish out whatever they want.

The extent to which the information is a true depiction of reality and its effect on society remains secondary.