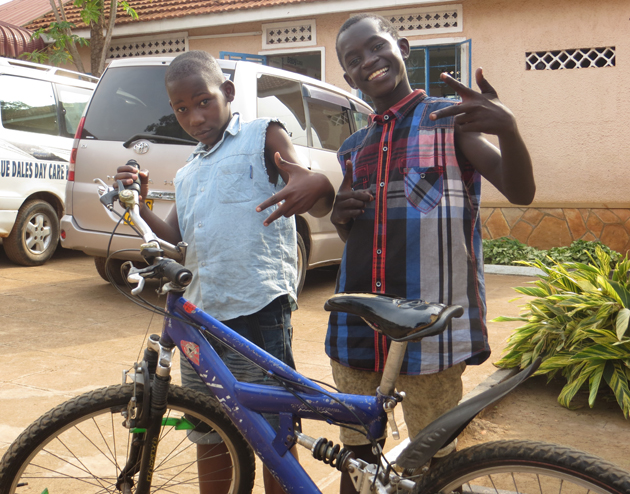 And for the children that feature in Edris Musuuza (Eddy Kenzo)’s Sitya Loss music video, 2014 is a year they will never forget. They danced to the song that translates into “I don’t fear defeat”, with no fancy costumes and no care in the world. They were themselves in a way only kids can be – dropping into splits, crumpling and even perfecting deadweight drops, all in endearing dance moves.

And now the video has gone viral on YouTube, becoming one of the most-watched videos of 2014, so far. It even has several spin-offs from all over the world, the way Psy’s Gangnam Style was, last year. A Ugandan living in a French town several miles away from Paris said she was shocked to hear Sitya Loss one day blasting from a store’s speakers as she shopped.

It is certainly the best-trending Ugandan video, ever. I worked my heels to Makindye to meet these fast-rising stars. Blue Dales kindergarten was our meeting point. Music from the kindergarten, where these children rehearse from, assailed my ears.

Peeping into the school through the blue gate bars, I saw young bodies glowing in the evening heat, making coordinated rounds of movement. As I moved closer, my feet involuntarily falling in step with the beat, my shadow unfortunately halted the children in their steps. Seemingly enthralled to see me, they ran to me, their steps barely audible but their giggling infectious.

Alex Ssempijja, alias ‘Outlaw’, one of the famous five, cast a demure smile as he welcomed me.

“You are welcome, madam,” he muttered. The others chorused after him. I felt at home.

We kicked off the interview that let me into their short, but action-packed lives. All born and bred in the slums, it has been a hard-knock life for Ssempijja, 12; Bashir Lubega, 11; Isaac Tumusiime, 10; Fred Tumwusigye, 9 and Patricia Nabakooza, 8.

“I had to squeeze into a one-room house with my parents and two siblings and ate one meal a day,” said the boisterous Ssempijja, who in the video performs topless.

He even had to abandon schooling at seven years, because of lack of school fees. The meagre income his parents Irene Nabbona, a hairstylist, and Ronald Musisi, a trader, earned did not meet all the family costs.

“Decent clothing was a challenge; we would dress up in one outfit for a week,” Ssempijja recalls.

But his life-changing moment came when he was spotted by Dauda Kavuma, the group’s trainer and manager, during Radio Buwama’s fans day club in 2010. Ssempijja’s dance adroitness got him into the Triplets – a charitable organization started by Kavuma to help needy children by promoting talent.

It is from this group that Ssempijja, also called Muzaphalu, developed his dance skills. He first featured in Eddy Kenzo’s Mundeke Numbe when he was eight years old. And with more training, he was chosen to feature in Kenzo’s Sitya Loss video that now has over 4.2 million views on YouTube.

“Who is your role model in dance?” I asked.

Ssempijja smiled, cupped his chin and coughed lightly before replying: “Internationally, I admire Chris Brown’s dance style and here, it is Eddy Kenzo.”

He also dreams big; he wants people to watch this space, because he is becoming president of Uganda in the future. He is currently in senior one at Emirates College in Katwe.

Tumusiime aka ‘Izo’ was eager to tell me his story. His faded green T-shirt and checkered dusty, cream shorts told a story of one who had been up and working. In the video, he is the one in orange ripped trousers and a striped black and grey T-shirt.

He was only in P2 when he joined the Triplets.

“Once during a promotion held at Makindye barracks, I saw Alex sing and dance and wanted to be like him. I approached Kavuma and told him I could dance well too,” the shy boy recollects.

He was given leeway and signed a dance contract with the group.  He has not looked back. Currently, Tumusiime, also called Abdallah, is a P6 pupil of Citizen’s Parents School in Makindye. Tumusiime, son of Hasfa Nakato, a housewife and Michael Nangoli, a trader in Sudan, looks forward to becoming a musician in future, following Kenzo’s footsteps.

He enjoys reading and reciting the Qur’an during his free time.

Tumusiime’s younger brother, Fred Tumwesigye, counts himself lucky to be part of the Triplets. He is the dancer that brings the Kiganda dance swagg into the video. Unlike Tumusiime who went straight to Kavuma to be let in, Tumwesigye, pet name ‘Celeb’, was aided by his older sister, Prossy Tausi.

“I used to hear about the Triplets group while growing up and in P3, I told my sister that I wanted to join. She took me to meet the teacher and was tested and passed,” said Tumwesigye, a Muslim convert now called Fahad.

He joined the group in 2012 and has since learnt to sing, honed his dance skills and stage confidence.

“I have travelled beyond the Makindye ghetto to high-end places such as Serena hotel, and I am regularly booked to dance at children’s concerts and events,” he said.

Tumwesigye is currently in P5 at Citizen’s Parents primary school. He dreams of becoming a musician like his role model, Kenzo, whom he credits as Uganda’s best musician.

He is the character that memorably drops to the ground on his butt and springs back right up in the video. His quiet demeanour is a disguise to the great dance skills he wields. At the beginning of the video, Lubega wears a white kanzu carrying pedicure material in a plastic basket on his shoulder. He finds Ssempijja and Tumwesigye challenging themselves in dance. Lubega slaps the floor hard, lifts his kanzu and drops, dancing with his butt on the dusty road.

Lubega, nicknamed ‘Adda’, is the somersault guru of the group. He was in P3 when he first spotted Ssempijja in Kenzo’s Mundeke Numbe and worked towards joining him.

“I looked for Alex since they told me that he was living in Makindye and when I found him, I told him I wanted to dance like him,” he said.

As good luck would have it, Ssempijja introduced him to Kavuma and he too was invited into the group.   He has been part of the group since 2011 and is currently in P7 at Happy Hours primary school. Lubega, the last-born of four children of Justine Najjemba, a restaurant owner and Beckham Bukenya, a mechanic, looks forward to becoming a journalist. Playing pool, football and dancing are his hobbies.

Her coyness as she rolled her eyes in the video was not for show; that is how she was even during the interview. She kept a smiling face throughout and kept teasing the boys who were trying to make fun of her.

She is the first born-child of Justine Ndagire, a housewife, and John Ssempijja, a driver. Her journey with the Triplets started when Kavuma spotted talent in her at a music, dance and drama festival at Precious Children’s Centre where she is currently studying.

Kavuma oriented her in dance and she is one of the key faces of the video, given that she is the only girl in it.

Many parents would fret if their child chose a destiny not in line with what they wished for them. And Hasfa Nakato, mother of Tumusiime and Tumwesigye, was ckeptical about her children’s interest in dance.

She, however, let them dance and she does not regret her decision to let them fly free.

“I want them to develop their talent further and gain international recognition. However, they should also read hard,” Nakato said.

The ghetto kids, as the five are fondly called, have attracted local and international attention. After famous rapper and entertainment mogul Puff Daddy aka P. Diddy watched the video and posted it on his social media account, it took on a life of its own, attracting attention from Hollywood as well.

The five children are now scheduled to appear on the popular Ellen DeGeneres talk show in the US before the close of the year. The five kids, none of whom has seen a plane before, are very excited at the prospect.

“For one to appear on this show, one must be backed with over 10,000 petitions and we received double that,” boasts Kavuma, their trainer.

The Triplets is a group of 20 children between ages five and 15 and has now gained local attention owing to the Sitya Loss kids. Kavuma says purchasing new costumes for every show and meeting the children’s school fees are still the biggest challenges.

“I am optimistic that in the future, The Triplets will have a home and instruments of our own,” Kavuma said.

When Sitya Loss was finally played at the kindergarten, the children put on an amazing show for me. They formed a line that wove into an intricate pattern, hands touching and dropping, as they leapt one by one into the centre.

Then the dance style changed. They jumped into the air, whirled and span on the floor. The rippling movement of their bodies was pleasant to watch.

And as the pleasurable and lively dance progressed, Kavuma joined in. It was an irresistible urge for me too, but having avoided the dance floor for more than five years, I was too afraid of making mistakes. But I joined in, just for a short while.
True, the best things in life – such as happiness and laughter – are free.

What some children in fancy mansions and cities lack, these ghetto kids have in abundance.