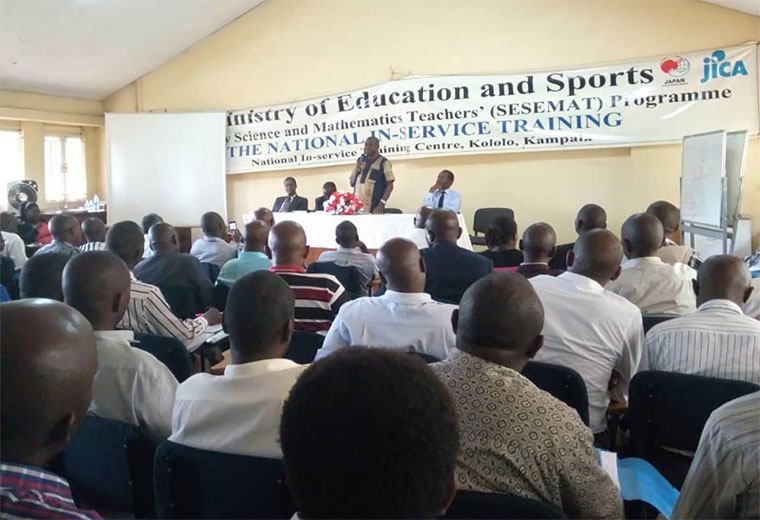 Several teachers of sciences across the country have missed out on the recently approved salary enhancement that created waves of both anger and celebration in the education sector.

This financial year, the government declared nearly a 300 per cent salary rise for science teachers in secondary and other post-primary instructions. The increment saw graduate science and grade V teachers' pay pushed to Shs 4 million and Shs 3 million up from Shs 1.1 million and Shs 796,000 respectively.

Science teachers were supposed to receive their first enhanced pay at the end of July, but celebrations were put off when the ministry of Public Service delayed sending out new pay structures to their counterparts in finance.

Everest Sseruwuge, an ICT teacher at Ishaka Adventist college, was among those looking forward to their payday but was taken aback when he received a notification from the bank with far lower figures than he had anticipated. Sseruwuge said he rechecked the bank notification several times in disbelief. He added that he tried to inquire from some of his friends and some had received the enhanced salary.

"This month it was on Monday on 9th when they paid us...but unfortunately I didn't receive the money I expected to get. I received the message at around 4 pm and it was indicating the salary that I was getting before the enhancement. Of course, I didn't feel good over that issue because I expected more money than what I received," Sseruwuge.

Clerisy Mwanga, a teacher of food and nutrition in Bushenyi district, also says that he missed out on the payout. The teacher stated that he had planned his finances in expectation of receiving a raise but was shocked to learn that there was no salary increment for him.

"Am one of the people who was anxiously waiting for the salary increment but to my disappointment when I checked on my account, there was nothing like an increment. Actually, in the ATM [booth] I felt disappointed. I said what?! Is it true that nutrition is not a science? So I got so many questions that ran through my head. I tried to make calls and find the officials but another disappointment came when I didn't find them in office because they had a workshop so I was left in darkness," said Mwanga.

Yunia Nakabonge, a mathematics teacher at Wairaka college in Jinja was left in frustration as she saw her colleagues withdrawing their enhanced salaries from the bank. She narrated that when she went to the district there were many other teachers from several schools but the district official didn’t offer them satisfactory answers.

“They failed to explain what happened," the puzzled teacher complained. "I have taught for years and have been receiving a science scale salary. Why is it that I got a salary like the one I have been previously getting? What did they base on to give that salary because that is above what art teachers receive?”

Fred Tuwinomujuni, a teacher of mathematics and physics at Kagonge secondary in Ibanda district noted that at their school only 6 science teachers out of 13 deployed received the enhancement. The irritated teacher added that after noticing they went to the education offices to seek an explanation only to be told that their appointment letter didn’t bear science, which according to him is not true.

"The human resources officer's answer was inadequate, and by the time we left his office, he had come around to our point of view as he had run out of lies to tell us. Since I started in the service, I have personally been paid a science pay. Then, how did my pay scale fluctuate?” Tuwinomujuni asked.

Betty Muwanguzi from Njeru municipality also shared a similar complaint. She said that the salary reached her account on Thursday afternoon but she was shocked after looking at the figures.

“I expected more money, but I instead realized that I had received an amount which is far less than what I was previously getting,” she told our reporter during an interview adding that there were several colleagues who had not yet received anything by Friday evening.

Aron Mugaiga, the general secretary Uganda Professional Science Teachers Union also noted that they are currently overwhelmed by the volume of complaints they are receiving from different parts of the country over the same matter.

To get to the bottom of the matter, Mugaiga said that as a union they had instructed a team to get in touch with the ministry of Public Service to establish what could have happened and how it can be resolved.

Mugaiga further said that the union has instructed its regional and branch heads to assist the affected teachers in submitting individual complaints to their respective local governments opposing the underpayment and asking for arrears of the missed payments for the month of July. He also advised the victims to provide their appointment letters and posting instructions—which list at least one of the science disciplines they teach—along with the complaint.

"We also clearly identified which subjects are to be considered for the enhancement. So every science teacher who is teaching one of those subjects - at least one, all of them will be considered for enhancement. If anybody misses then that is an anomaly, it has to be resolved. And we stand with our members at all costs to make sure that they get justice. However for now, let them write to the accounting officers, first of all, to explain the anomaly and the missing enhancement and then ask the accounting officer to put them on the right scale of science as well as asking for arrears," said Mugaiga.

However, amid the confusion, several teachers who were left out say they are still optimistic that the problem will be resolved. Elias Munywanisa Katatumba is one such teacher. Katatumba who teaches agriculture says that as a senior person in public service he is convinced that since the government approved their new structures they will ultimately be paid per their scales.

"I suspect it was an error considering the fact that some of our colleagues got the money. I have consoled myself that we shall get that money. Of course, we felt bad but we expect by next month our error to be corrected," said Katatumba.

Catherine Bitarakwate Musingwiire, the permanent secretary Ministry of Public Service had agreed to address questions about the potential causes of the disparities, but by the time of publication of this report, she had not yet replied to our reporter's email.