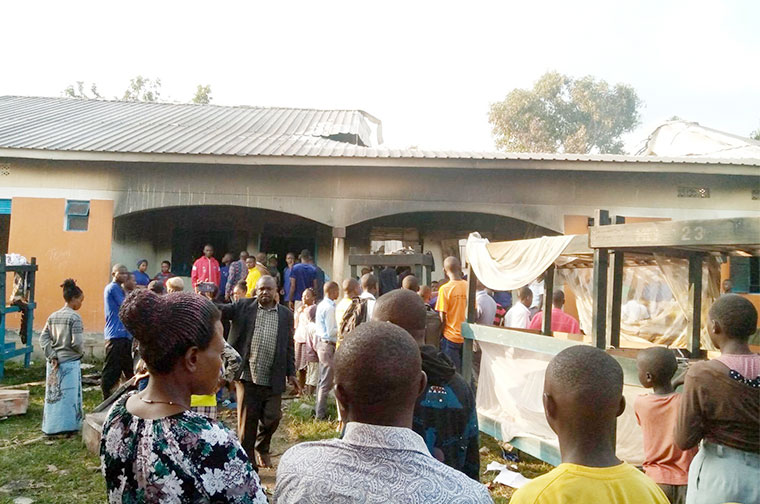 Parents gather at the burnt dormitory

The affected property includes mattresses, books, jerrycans, clothes, and money among others. No casualties have been reported.  The school head teacher, Christopher Nditakirani, says that the fire broke out at around 8:00 pm on Monday when students were attending night preps. Nditakirani says that they suspect an arson attack after two teachers reported to have seen unidentified men moving behind the dormitory before the fire went off.

“My teachers said they saw someone jumping over the fence from the side of the dormitory before the fire started, and a student who was sick and sleeping in the dormitory, said two men told him to get out of the room before setting it on fire,” Nditakirani said.

The chairperson board of governors, pastor Peter Bwamwiterebye, says that over 90 students lost all their property. He says that they are scheduled to hold an emergency PTA meeting later today to develop an emergency plan for handling the affected children.

“By the time of this incident electricity was off, we ask the concerned authorities to do enough investigation to ascertain the cause of the fire,” Bwamwiterebye said.

Atuhaire Headgodi, one of the affected students, says that the fire has left him with one shirt and a pair of trousers that he was putting on while in class. He says that they heard a big blast before they saw smoke and flames coming out of the dormitory building.

One of the affected parents, Yunus Kiyongo has asked the government to support students who have lost their property. The Rwenzori West police spokesperson, Vicent Twesige, says that they have started inquiries into the cause of the fire. He added that no arrest has been made yet in connection to the incident.