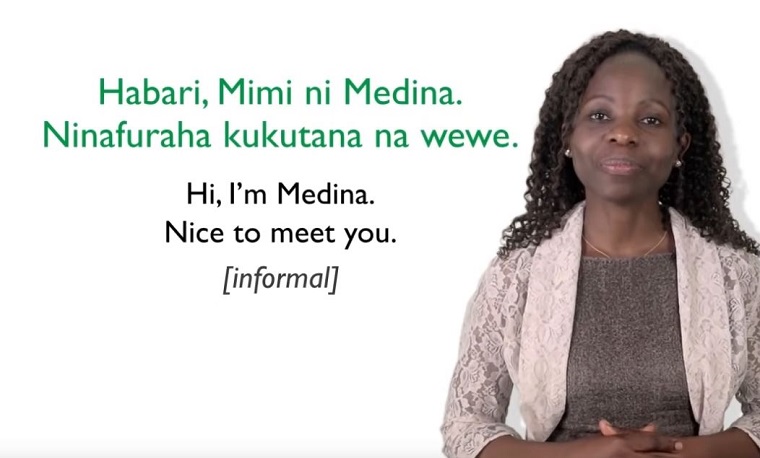 A screen grab from SwahiliPod101.com

Members of the Chama Cha Kiswahili Africa Mashariki, an association that brings together lecturers of Kiswahili language from higher institutions in East Africa have pointed out blended Swahili known as “Sheng” as one of the major challenges facing promotion of the language across the region.

Sheng is a Swahili and English-based jargon originating from the urban youth of Nairobi, Kenya, and influenced by many of the languages spoken there. While primarily a language of urban youths, it has spread across social classes and geographically to neighbouring Rwanda and Uganda.

Although the grammar, syntax, and much of the vocabulary are drawn from Swahili, Sheng borrows heavily from other Kenyan ethnic languages including Luhya, Gĩkũyũ, Luo and Kamba. Like all slang, Sheng is mainly used by the youth and is part of popular culture in Kenya. It also very fluid and evolves rapidly, as words regularly moved in and out.

The lecturers addressed  the press about the challenges facing promotion of Swahili language after the conclusion of the 20th conference of Chama Cha Kiswahili Africa Amashariki at Kabale University in southwestern Uganda. The chief editor of Jarid ya Chakama, a Swahili news journal for PhD students of Kiswahili in East Aftica, Prof Musol Kandagor said they were challenged by the Sheng slang whereby students were mixing it in both spoken and written vocabulary.

Dr Wallace Mulaga a Kiswahili lecturer from the University of Rwanda said that Sheng was a threat, but it had not yet spread wide in Rwanda. He said that they were mostly challenged by another blended swahili dialect known as “Kingwana” that originates from the Democratic Republic of Congo (DRC), usually brought in Rwanda by the Congolese truckers.

However, Dr Nehema Luwago from University of Dodoma noted that the Sheng slang had not yet become a problem in Tanzania, and their main challenge was only teaching the English language to the students who tend to mix native languages into Kiswahili.

Meanwhile, Kabale University vice chancellor Prof Joy Kwesiga said that hosting the International Kiswahili Conference was long overdue and it would add a lot of value to the measures being put in place to promote the language at the university.

Mutenyo said that the purpose of the annual conferences was to bring together ideas geared at promoting Kiswahili by sharing notes, and guiding PhD students on how to write and  publish their academic journals and books in the Swahili language.