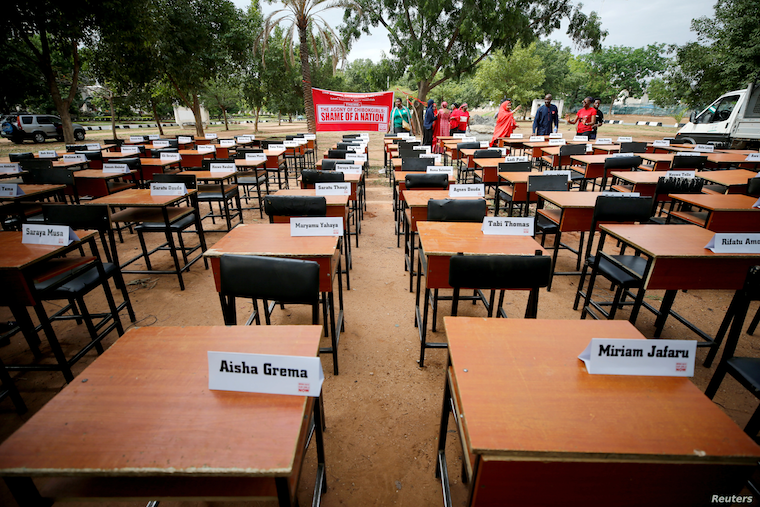 FILE - Names of missing Chibok schoolgirls kidnapped by Boko Haram insurgency are displayed during the 5th anniversary of their abduction, in Abuja, Nigeria

Nigeria's government has vowed to rescue 112 former schoolgirls believed to remain in Boko Haram captivity since they were kidnapped by the militants from the town of Chibok seven years ago.

A statement titled "Chibok Girls Still on Our Minds" was released by the presidency Thursday as Nigeria marked the anniversary of the kidnapping in Borno state. But parents and advocates accuse authorities of negligence and making empty promises.

"Seven years down, we're still asking for accountability and closure on 112 of them?" said Allen Manasseh, the media and publicity head of the Chibok community. "It's unacceptable. So the only deliverables that we think will translate into making their statements sensible is to see the girls being rescued."

Around 503 girls were at the school the night of the Boko Haram abduction in April 2014. Out of 276 taken, more than 100 were freed through negotiations, while others managed to escape.

Last week, to mark seven years of abduction, parents of the remaining girls gathered at the school to pray for their safe return. Manasseh said the government is mostly silent on the issue but merely targets anniversaries to issue statements.

"I don't see anything changing ... we keep demanding accountability and we're not seeing it. Schools cannot be safe when you allow insurgents, when you allow terrorists to keep shifting the goalposts," Manasseh said.

In recent months, several other mass kidnappings of students have occurred in northern Nigeria, leading to school closures. A new Amnesty International report said more than 600 schools in the north have closed due to insecurity since December.

"We know, for example, in states like Katsina, Yobe, Kaduna and Zamfara, the authorities' only response to the abduction of schoolchildren is to close down schools, and this is something that is very worrying," said Seun Bakare, a spokesperson at Amnesty International.

Nigeria has the highest number of school dropouts globally according to UNICEF, mostly due to insecurity in the north, where school enrollment and literacy levels are very low. While many parents continue to wait and hope, advocates and Amnesty International are urging authorities to make schools safer.