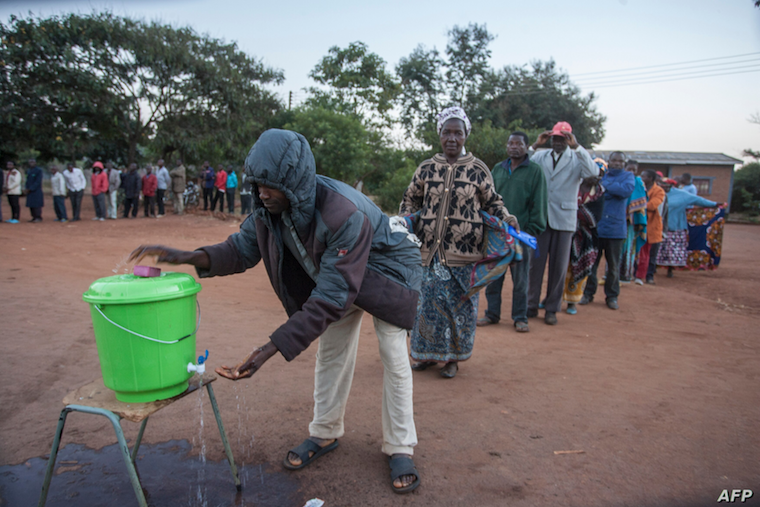 FILE - People queue to wash their hands as a preventive measure against the spread of the COVID-19 coronavirus before they can queue again to vote at a polling station in Lilongwe, June 23, 2020

A spike in COVID-19 cases has forced authorities in Malawi to delay plans to reopen schools on July 13. In addition, the country is running short of testing kits.

The co-chair for the presidential task force on COVID-19, John Phuka, said Friday that a critical shortage of test kits has forced the government to stop mass testing.

"So what we have done, we have changed our testing to make sure that we are testing only those with symptoms," he told VOA, via a messaging app.

"The logistics around these tests is that we order them from abroad," he said. "So some of those kits come from Europe, and as we speak because of logistic challenges and flights, we have some test kits stuck elsewhere in Europe."

The kits are expected to arrive in two weeks. In the meantime, those who have had contact with confirmed COVID-19 patients are being advised to isolate themselves for 10 to 14 days. Health rights campaigner George Jobe says he worries that the lack of testing could make the virus spread further and undetected.

"The negative effect is that we will stop knowing how many people have coronavirus because the past times we have been reporting cases of those who have tested positive," Jobe told VOA via a messaging app.

Malawi is currently facing a surge in cases, partially because of the winter season, which health experts say provides fertile ground for the coronavirus, which causes the COVID-19 disease.

The surge is also attributed to a failure to control crowds during recent election campaign rallies and a return of migrant workers from South Africa.

As of Saturday, Malawi confirmed 2,261 cases including 33 deaths. Officials say more than 700 of these cases have come from abroad, while 1,000 others have originated locally. The country with a population of 18 million people has tested about 19,000 people in its 39 testing centres.

The spike in COVID-19 cases has forced the government to shelve plans to reopen schools next Monday. The schools closed in March as the coronavirus began to spread across southern Africa.

Benedicto Kondowe, executive director for the Civil Society Education Coalition, told VOA via telephone that the government should have allowed classes to reopen for students to take final examinations, but under strict COVID-19 guidelines.

"Because currently, we are aware that online programs, lessons through the radio as well as television, are leaving out millions of Malawians, especially those who are coming from poor backgrounds," Kondowe said.

However, the ministry of Health says the government cannot risk the lives of students, so the right to an education must be suspended as authorities monitor the COVID-19 situation.