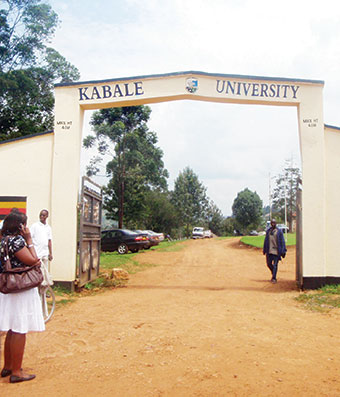 The hope to calm unending strikes by lecturers and students at Kabale University is not yet visible, despite the intervention of the education ministry.

The university has been embroiled in strikes by lecturers for more than two months, majorly over salary arrears. Three weeks ago, students joined the strike due to lack of lectures since the new semester started.

On October 18, Janet Museveni, the education minister, convened a crisis meeting with the university management, which presented to her the problems the institution is facing.

A subsequent statement indicated that there were solutions agreed on to end the crisis.

“The meeting agreed to call upon staff, students and all other stakeholders to support  the efforts being put by government  and the leadership of the university to arrive as a lasting solution,” reads part of the two-page release.

However, sources claim the university management skipped vital challenges that are fueling the impasse. These include alleged false accountability, cliques within council members and illegal demotions, among others.

Government took over the university last year and turned it into a public institution.

“Last year, the university received Shs 5.1bn but the expenditure is not clear though much of it is supposed to pay lecturers. The management claim most of this money went to construction, which is disputable,” an insider source told The Observer on October 15.

This same source further alleges that in February, government released Shs 1.1bn to pay salary arrears then but only Shs 400m was used, leading to further accumulations.

However, when contacted on October 21, Vice Chancellor Prof Joy Kwesiga said though documents indicate that the said Shs 1.1bn was wired to the university code 127, up to now it has never landed on it.

“The exact unpaid salary arrears are six months, not eight as alleged. Three of the six can only be paid after an external audit. However, the Shs 1.1bn is being processed and immediately we receive it, staffers will be cleared. As I talk now, the university council has convened to guide us on the next move because lecturers and students are still on strike,” said Kwesiga.

Manzi Tumubweinee, the university council chairman, on request by government conducted a validation exercise that saw some old university staff given an option of resigning or joining the university afresh.

“The staff that cannot be placed in the new establishment may be retained by the university under the private programs if they are required,” advised Catherine Bitarakwate Musingwiire, the ministry of public service permanent secretary.

Concurring with this advice, Mwesigwa Rukutana, the deputy attorney general, added that excess staff should be appointed to other vacant positions requiring the same qualifications.