Ten outstanding female professors have been honoured by Makerere University. They got the Gender Equality Awards.

While officiating at the function, the Vice Chancellor, Prof. Venansius Baryamureeba, said these women worked hard to achieve their current status.

“Becoming a full professor involves a teaching period of 11 to 21 years, a total of 11 to 21 publications, supervision of five to nine graduate students and evidence of having contributed to community development,” Prof. Baryamureeba said.

The women were following in the bold footsteps of the late Eunice Lubega Posnansky, the first woman to obtain a degree from Makerere University. Eunice Lubega graduated with a degree in Education in 1955, married Merrick Posnansky, the then curator of the Uganda Museum, in 1961, before the couple went on to live in the USA, where she died in 2003, aged 76. Only six of the honoured professors made it to the event. Observer School was privileged to interact with them.

I dedicate my award to all those struggling academicians who are trying to excel. My journey to professorship started with the decision of my illiterate parents to send me to school at a time when it was a waste of time to take a girl to school.

I was born in Namunyumya, in Iganga District, and went to Namunyumya Mixed Primary School; then to Mt St. Mary’s Namagunga, before joining Makerere University in 1970. I graduated in 1974 and due to the exodus of expert personnel, I was retained at the university as a junior lecturer. I started on my Master’s degree immediately and completed it in two years.

However, I only became a full lecturer in 1988, before starting on my PhD at Oxford, which I completed in 1992. I became an Associate Professor in 1996 and a full professor in 1999. My greatest challenge has been balancing teaching, research work and my domestic responsibilities.

But I’m grateful to my husband, Nathan Okwakol, who supported me throughout. I never went on study leave as my other colleagues do now.  My message to all is that the difference between the possible and the impossible lies in the level of determination, discipline and focus. 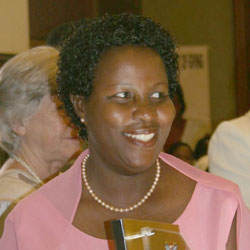 I was born in the early 1950s in Bushenyi District to the late Erieza and Ednance Kakuramatsi.
I attended Gayaza High School and as an old girl of the school, I live by the motto: Never Give Up. I graduated from Makerere in 1975 with BSc. in Agriculture first class; a feat only equaled 20 years later.

I headed that department for 12 years and todate we are the fastest growing department. Very soon, we shall become an institute. After a lot of hard work, I was promoted to full professorship last year; in fact, it was my Christmas present. The President of Uganda honoured me last year because he believes that the future of our agriculture is value addition. 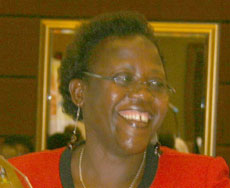 I started early on my journey to professorship. I had my PhD in Linguistics by the time I was 26, and went on to teach at the University of Zambia in Lusaka. However, the workload was so heavy that I never published anything during the time I was there.

I later moved to the University of Dar es Salaam where I was able to start publishing. From there, till I returned to Makerere, I was in a struggle to get promotions from Lecturer to Senior Lecturer, a struggle that took me six years. What I noted is that women’s struggles are usually lone struggles, so women tend to fight harder than men.

I was initially an average student and my parents and teachers never liked me much because I spent most time playing in my hometown of Iganga. Because my teachers never believed in me, I developed a lot of self confidence.

I passed Mathematics, Physics, Biology and Chemistry at O-level, but I chose to do the latter three. But my teachers complained that I was shying away from Mathematics at A-level. I stuck to my choice and eventually made it to Medical School where I graduated in 1980. I also got married in the same year, although we missed the last part of the ceremonies because of a coup.

I got my Masters in 1984. I love teaching with a passion, but I only teach those above the age of 18. For those below that age, I don’t know what to do. That is why I’m grateful to my husband for holding our family together during the many times when I have had to travel out of the country for further studies and lectures.

Women are socialised to accept mediocrity. If a woman gets something average, everybody celebrates, yet if a man gets average, he is asked to do more.

I grew up in a polygamous family and our father’s motto was that if you failed there would be no room for repeating: you had to drop out of school and join the labour force, or get married. As a result, all my sisters dropped out in primary school and the boys refused to study because of the money they could make.

However, my father was proud of me, showing me off as his daughter Nakiboneka who could speak English!

That I was able to reach this far, I thank him in his grave. I took his motto as gospel and, I recall, failure was not in his vocabulary. My strategy was to make friends with students I thought were smarter than me, and together we formed reading syndicates. I also thank my very supportive husband. He was my babysitter all through.

When I graduated, I received so much unprecedented media coverage both locally and internationally. I was not prepared for it, so I became media shy ever since. When I started out, a lot of women preferred to come to me for treatment because I was a novelty and one of them.

I was forced to send many of them to my male colleagues so that we could share out the treatment load. I returned to the Medical School at Makerere after my graduate studies in the UK and USA. At the time, I also used to take medical students to Kasangati Health Centre for fieldwork and I used to drive a big Land Rover and it was not easy.

Being very small, people used to look at me and wonder how I maneuvered it. After two years, I became a lecturer, then a senior lecturer and, later on, an associate professor and finally a professor.

I’m grateful to my family for their support, especially with the heavy workload of teaching and research.
Being a woman in academia and a Professor of Public Health, I have had to delegate my domestic responsibilities and this has not been easy.

The awardee professors not present at the function: