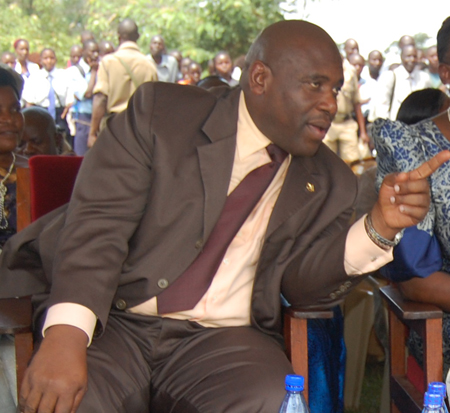 . You are still corrupt, charges Kiyingi
. I may take you to court, Gen Muhwezi warns

As the delegates’ conference of the ruling party draws closer, the infighting in the NRM shows no signs of abating.

Asuman Kiyingi, the minister of state for Regional Affairs, has now lashed out at Maj Gen Jim Muhwezi, the former minister for Health, describing him as irredeemably corrupt. Kiyingi said last week Muhwezi, who chairs the security subcommittee on the organising team for the December 14-15 delegates' conference, is “beyond redemption.”

In a 10:50-am post on his Facebook page on Friday, Kiyingi wrote: “I have so much information regarding Jim’s corruption that I am prepared to go to any court and assert that. Advise him to sue me if he thinks am defaming him. Mzee [Museveni] is magnanimous and forgives people if they have some useful work they can do. But he also knows Jim is not clean.”

He added: “My position on Jim Muhwezi and his corrupt clique of hirelings remains. They are tainted with corruption beyond redemption. Hiding behind the office and name of the president to pursue personal vendettas can only mislead fools.”

Kiyingi’s attack on Muhwezi came a few days after he had posted that that the general was behind a plot to block some delegates from Kamuli, from accessing Namboole stadium for the NRM delegates' conference.  On November 27, Kiyingi posted on his page: “Thomas Kategere, have you been accredited for Namboole?  The Gavi and Global HIV Fund racketeer in charge of accreditation says your district Publicity Secretary will only step in Namboole over his dead body.”

Muhwezi chairs the security subcommittee tasked with vetting delegates. Muhwezi told The Observer on Saturday that he had read the comments and was considering legal action.

“I am not going to behave like him. I don’t want to engage in a war of words. I am a disciplined person. If he says he supports president Museveni then he should not be writing such things which I think the president cannot approve. He called me a Global Fund racketeer and he knows court cleared me. I reserve the right to take legal action,” Muhwezi said.

Muhwezi also dismissed claims that he had powers to lock out any genuine delegates from the conference.

He said: “People who are going to attend the conference are not decided by me. They are clearly stipulated by the party constitution.”

Asked whether he had any personal differences with Kiyingi, he said “Kiyingi should answer the question.”

On Saturday, Kiyingi said he stood by his posting and said Muhwezi “is welcome” to sue him.

The conflict between Kiyingi and Muhwezi dates back to the early 2000s when Muhwezi was minister of Health and Kiyingi, corporation secretary of the National Medical Stores. In 2006, Kiyingi told Parliament that Muhwezi had personally got involved in the recovery of debts worth Shs 2.23 billion for NMS.

Kiyingi said Muhwezi recommended a law firm that charged exorbitant fees to collect NMS debts from the ministry of Health which the general headed at the time.

Before that, Muhwezi had sided with Robert Rutaagi, the former general manager of NMS, when Rutaagi called for Kiyingi’s resignation for allegedly fanning the conflict in the organisation. The row between Kiyingi and Muhwezi is the latest twist in the array of subplots to the clash between President Museveni and embattled NRM Secretary General Amama Mbabazi.

Kiyingi used to be seen  as one of the close associates of Mbabazi when the latter was prime minister. But it appears that no minister now wants to be seen near Mbabazi, the strongest rival to President Museveni since the emergence of Dr Kizza Besigye in 1999.

Muhwezi, meanwhile, appears to be one of the beneficiaries of the Museveni-Mbabazi row. Once tainted by corruption allegations that he subsequently defeated in court, Muhwezi is now seen as one of Museveni’s strong pillars in the NRM.  His security committee has been accused of conspiring to lock Mbabazi sympathisers out of the Namboole delegates' conference.