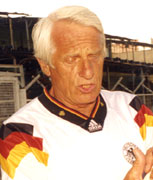 German Burkhard Pape is widely considered the best ever tactician to handle The Cranes. Even though he never took The Cranes to the Nations Cup, Pape was admired for his strategy of building for the future instead of going for instant success. HASSAN BADRU ZZIWA recounts his contribution to Ugandan football;
Pape came to Uganda as national coach in 1968 from Sierra Leone where he had held a similar role. He succeeded Robert Kiberu (R.I.P) whom he retained as assistant.
His main role was guiding Uganda to the Nations Cup but upon holding several coaching courses for clubs and schools at Kyambogo College (now Kyambogo University), Papel got first-hand information that there was no strategy to tap young talent.
Unlike other coaches that go for overnight success, Pape’s main goal upon arrival was establishing a foundation for future success through a youth program, which was unheard of at the time.

His goal was replacing the ageing Cranes players such as Joseph Masajjage, Steven Balaza, John Ddibya, Ibrahim Dafala, Swalleh Wasswa and Parry Oketch among others.
Pape’s five - year contract as Uganda Cranes coach expired in August 1972, bringing down the curtain on an era of Uganda football that will take time to be matched.
Statistics say it all; in the 70 matches he was in charge of Uganda, The Cranes won 41, drew 16 and lost 13. Under his tutelage, The Cranes also lifted the CECAFA Cup three times, keeping it for good.
During his reign, he also organised several friendly matches with our neighbours and African powerhouses such as Cameroon and Egypt. However, the biggest of them all was The Cranes tour of Germany in 1970 where they played several German clubs.
Pape returned to Uganda in June 1999 and FUFA executive led by Denis Obua wanted to re-engage him as FUFA’s Technical Director but deal hit a dead end due to lack of funds.
For the period Pape was Cranes coach, they didn’t qualify for the Nations Cup. But after his departure in 1972, Uganda qualified three times in a row – (1974, 1976 and 1978) with the team dominated by the ‘Pape boys.’

He was a polite and soft-spoken person. At times he didn’t have it smooth when his boys lost a match but he always remained jovial and accepted defeat in good spirit.
“Under Pape there was nothing like club politics, and players had a positive attitude,” recalls Otti, who was Cranes Team Manager in Pape’s days.
When asked in 1999 whether he used to lose his head, he said; “like any other coach, I could sweat off the touchline whenever trouble threatened my players. I always wanted to see players play according to plan and instructions.”
Pape is also remembered for having invented the famous kili-kili (one-touch) style of football in Uganda. “We used to enjoy it and it used to dazzle our opponents, he was a great coach who made sure that players are one irrespective of clubs affiliations. He used to host us at his home on several occasions, where we used to eat and drink,” recalls Polly Ouma.

Pape is remembered as a workaholic and many times used to visit clubs’ training sessions to lend a hand to local coaches. The most striking of all was his involvement with Simba’s fairytale run in the 1972 Africa Club Championship. Despite Lt. Wilson Ogwal being the coach, Pape is credited as the person who pulled all the strings in this run that was ended by Guinea’s Hafia Conakry in the final.

After Cranes sparkling performance in the 1978 Nations Cup, the majority of ‘Pape boys’ had become old and could not push on.
However, the youth team was no more and this crippled the senior team.
FUFA continued to depend on players who were above 30 years with no success.
Many FUFA administrations tried to make ad-hoc methods to have a youth team in place but in vain and it’s no surprise Uganda hasn’t qualified for the Nations Cup since.
It’s for that reason that Pape is hailed as the greatest coach ever to grace Uganda Football.

bzziwa@yahoo.com
Next week we shall look at former Cranes coaches after Pape.