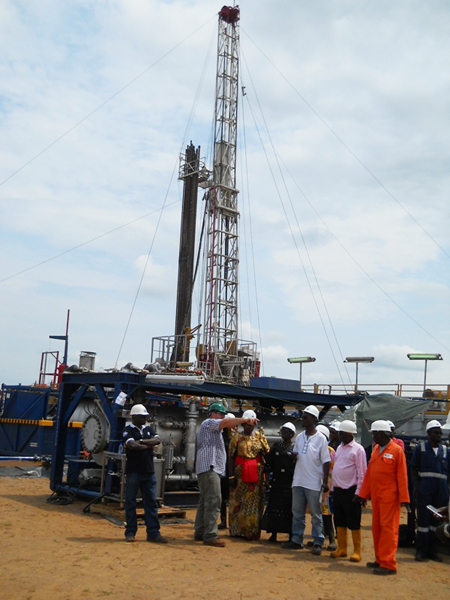 However, for Ugandans to access such jobs, they must have their competences and technical skills certified. In a two-part series, Edward Ssekika finds out whether Ugandans have the required competences and certified skills to compete for these jobs. It is not in doubt that the oil and gas industry is expected to create thousands of jobs.

The industry has created hundreds of jobs at the exploration phase alone, and thousands more will be created in production. The latter is expected to be punctuated by a web of pipelines – connecting oil fields to the refinery, for crude oil export, and for refined petroleum. Then there is the construction of a refinery and processing facilities, among other key infrastructures.

At production peak, the IBS report said, the oil sector will employ 11,000 to 15,000 people directly, while indirect jobs will range between 100,000 and 150,000. The figures will shoot up as the country continues to search for more oil, the survey said.

Last June, at his farewell party, Loïc Laurandel, the former general manager of Total E&P Uganda Ltd, alluded to the skills gap in the oil sector.

“The big challenge I have encountered is finding people with the appropriate skills and knowledge who can work in the oil industry. There are very few Ugandans with the required skills,” he said, urging Ugandans to brush up their technical and artisanal knowledge to fully partake in the sector.

Dr Ben Manyindo, the Uganda National Bureau of Standards executive director, says the issue is not that Uganda lacks technicians, welders or craftsmen, but their skills are not internationally certified.
But not every job requires certification, though.

“Oil and gas industry involves a lot of specific equipment with complex technologies which requires advanced knowledge and skill,” she says.

Manyindo adds that if Uganda does not wake up to the reality of stringent standards in the sector, the country is likely to miss out on opportunities. This, he says, has already happened on some projects. For instance, during the construction of Kabalega hydropower plant, welders and metal fabricators were imported from Pakistan and Sri Lanka.

This was because Ugandan welders lacked certified skills. Welders from Katwe or local vocational institutions have skills, but cannot be verified since they are not internationally certified, Manyindo explains. To Prof Charles Kwesiga, the chairperson of Uganda Petroleum Institute, Kigumba, there is no middle ground on the issue of certification.

“Without international certifications, Ugandans should forget about oil jobs,” he warns.

This means that if Ugandans can’t get the jobs due to lack of certified skills, oil firms have a leeway to import.

Losing out on oil jobs could make locals feel left out. Often, this has triggered conflict in many oil producing countries, including Nigeria and Angola. In 2011, the government contracted Prof Jackson Mwakali to conduct a study on local content.

In his report titled Enhancing national participation in the oil and gas industry in Uganda, 2011, he asks government to prioritise and standardise vocational training.

UNBS’ Manyindo says certification is a process designed to measure the knowledge and practical skills of technicians and craftsmen. It tests one’s capability to deliver welds and other technical works at the required standards. Certification is not only unique to oil and gas, but even in other professions it is a prerequisite.

For instance, in accounting, having a university degree or diploma doesn’t make one an accountant. He or she has to undergo internationally recognised trainings and examinations such as ACCA, and CPA to be certified.

“Welding in the oil sector is not ordinary welding of doors and windows. The standard is too advanced.  A welder has to weld to the required quality so that there is no leak whatsoever,” Manyindo says.

Kevin Hughes, the operations manager in charge of training at OGAS Solutions, agrees.

“Oil and gas is an extremely [sensitive] industry and that is why it needs competent personnel. If you have a welder whose competences are suspicious, he or she exposes his life, that of others and the entire investment at risk,” Hughes says.“A small mistake may blow up everything.”

OGAS Solutions is registered in Thailand but with a global footprint and is setting up a training institution in Hoima district.

Patrick Danaux, the Central and East Africa manager for OGAS Solutions, says there are many certifications from many countries in the world.

“Uganda has to decide which country or model to follow,” Danaux says.

For instance, some welders may be certified by the American Welding Society or City and Guilds of London. Both firms train craftsmen and technicians at various levels. But Wei Chai says certification can even be done here, but must be in line with international oil and gas standards.

“The duration of the training and certification of qualified technicians varies, based on the required level of qualifications,” Wei Chai says. “Time is of the essence and the training or certification process will need to start early 2015, to ensure readiness for the project kickoff.”

In the second and final part of series, we discuss how lack of a national content policy and absence of a specialized government body to handle skills competences and certifications is an issue of concern and what is being done to ensure that Ugandans are trained and their skills certified to take up the jobs.