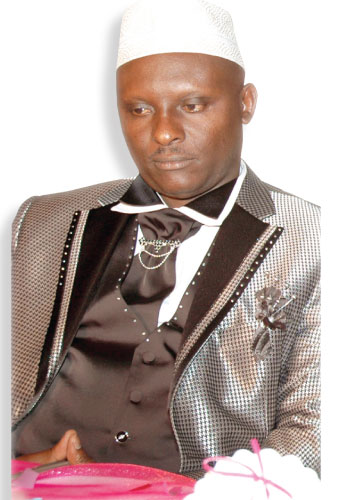 At 20, Musa Kavuma was a manager at Mukoko Coffee Factory in Masaka.

He is proud of this accomplishment because it proves to him that someone does not need to have a degree to be successful; it is God’s providence.

“I went to school at Kibuli Demonstration School, Aga Khan Masaka and Kawempe Muslim but I don’t have any certificate to show; so, I consider myself uneducated,” explained Kavuma.

Although he has other businesses, Kavuma is popularly known as Eagles Production manager and CEO of KT Promotions - the company that organized Lucky Dube’s last show in Uganda.

Kavuma traces his love for music to his school days at Aga Khan, when he used to organize shows at school and earned some money. His peers then started calling him “Mr Money” because he was richer than most of his teachers. After school, John Bosco Kyobe, who was a prominent local artistes’ promoter, asked Kavuma to join the music industry: a decision he is glad to have made.

In 1996, he took on Paulo Job Kafeero  as his first client and met Diamonds Production, before it cleaved into two forming Eagles Production.

“In 1997, while at my coffee business in Kinoni, Masaka, I was officially introduced to Diamonds Production. It had singers like Sylver Kyagulanyi, Betty Mpologoma, Martin Angume. They had financial problems and needed help, which I gave in return for a show and I ended up becoming their manager before I joined Eagles in 2003,” he recalled of 1997 - his golden year. He also organized Lucky Dube’s show in the same year.

The following year, Kavuma set the record high when he charged Shs 10,000 for a show that had Essence Kasozi from London, Sarah Birungi and Paulo Kafeero. At the time, people used to pay Shs 3,000 for a show. As manager of Eagles’ Production, which is a group of over 30 artistes, Kavuma tried his hand at organizing big shows after Lucky Dube’s successful show.

He is the man behind big shows like CBS’ Ekitoobero and Bukedde FM’s Embuutu Yembutikizi. He has also ventured into sports; he organized the match between KCC and South Africa’s Super Sport in 2009, which is perhaps the best organized international match Uganda has had in recent years.

“I also organize other events like weddings, parties and I am now a professional events manager and I don’t regret joining the business,” boasts Kavuma, the resourceful businessman.

Because he is an organizing guru, it is not a surprise that he is the brains behind Bebe Cool and Bobi Wine’s Battle of the Champion show tonight at Kyadondo Rugby grounds.

“I met each of them at a time and talked to them separately though my aim of uniting them failed but you never know after the Friday show they may leave as friends,” he said.

It is also his gumption that has seen him succeed when many would cower in fear. For example, Kavuma took a gamble when his promotion company, KT, successfully organized Chris Evans’ Mulungi concert on the same night as Chameleone’s Valu Valu.  Owing to that accomplishment, his friends refer to his company as Kavuma Tatya, meaning Kavuma the fearless.

Kavuma has managed musicians for over 12 years and he has come to know them even more than his children.

“My biggest weapon is knowing what everyone wants and keeping everyone’s secret. I can now look at someone and read his or her mind and I deal with them according to their needs. Mind you, I am managing very rich people who need to be handled exquisitely and that is why they love my skills and they are my best friends, like Barcelona players and their departing manager Pep Guardiola,” he explained before stating that he is an Arsenal fan, not Barcelona’s.

However, with rumblings in Eagles Production, Kavuma’s weapon of knowing people has been tested. Word has it that Fred Sseruga threatened to leave the band because of bad management.

“It was very abrupt and we didn’t see it coming but I managed the situation and Sseruga will be on stage sooner than later. People should know that in a family such things happen sometimes, but the way you handle the situation matters and I left the winner though it was a very tough lesson,” he said.

“I don’t regret anything; all my dreams are becoming a reality as I have managed to form sister companies like Mukavu Constructions, Suza Constructions and Pacific Car Bond at Najjanankumbi,” he said.
His only regret is that music and its fame are dying.

“People who started hiring musicians on weddings and other functions are killing our business because people watch them for free. All musicians are now thinking about weddings and while composing songs, they target functions. They are thinking in one dimension, something very poisonous,” said a concerned Kavuma.

He hopes the trend will die out so that they enjoy their business as before. Kavuma was born 40 years ago in Kinoni to Hajji Yasin Lubowa and Haddy Nalwoga. He is married to two wives and has children.